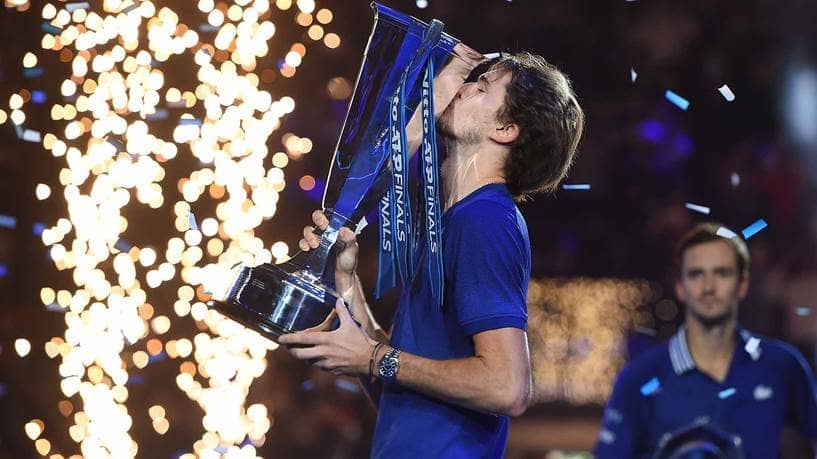 The German defeated World No. 1 Novak Djokovic in the semi-finals and backed that up against Medvedev in an impressive performance. Zverev imposed his powerful game on the Russian as he stepped inside the court to outmanoeuvre the 25-year-old, who sat deep behind the baseline, to secure victory after 75 minutes.

With his victory, Zverev has become just the fourth player in the tournament’s history to earn semi-final and final wins over the Top 2 players in the FedEx ATP Rankings. The World No. 3 fired eight aces, hit 23 winners and did not face a break point in his statement win over the Russian.

“It was great,” Zverev said in his on-court interview. “I won the [Nitto ATP] Finals, in the final against someone I had lost five times in a row, so I had to play one of my best matches. I am happy about that and happy to go on holiday with this win.”

The 24-year-old, who fell to Medvedev in the round-robin stage, has repeated what he achieved in London in 2018 when he won the title by reversing a round-robin loss to the player he faced in the championship match. The third seed beat Djokovic to clinch his first season finale trophy three years ago.

“It is special, and I am super thrilled and happy right now,” Zverev added. “There is no better way to end the season than winning here. I am incredibly happy and I am already looking forward to next year.”

Zverev has now earned a tour-leading 59 victories this season and has snapped a five-match losing streak against Medvedev, levelling their ATP Head2Head series at 6-6. The 25-year-old defeated Zverev at the ATP Cup and Rolex Paris Masters in 2021.

Earlier this year, the World No. 3 captured two ATP Masters 1000 crowns in Madrid and Cincinnati and won the Tokyo Olympic singles gold medal. The 19-time tour-level champion also triumphed in Acapulco and Vienna and has won 32 of his past 36 matches since Wimbledon.

Zverev made a strong start against Medvedev as he dominated the longer rallies, striking his powerful groundstrokes down the middle of the court to reduce the angles available for the Russian to hit. The 24-year-old broke in the third game and was consistent and accurate on serve throughout the first set, hitting his spots as he won 89 per cent (16/18) of points behind his first delivery to move ahead.

Fuelled by momentum and backed by the vocal crowd inside the Pala Alpitour, the German broke again immediately at the start of the second set. Zverev combined his powerful serving with big ball striking as he continued to raise his level under pressure, showcasing his determination and quality to secure the biggest title of his season.

Medvedev had won his past nine matches at the Nitto ATP Finals, having beaten Dominic Thiem in the final last year to lift The Brad Drewett Trophy, after going 0-3 on debut in 2019.

This year, the 25-year-old captured his maiden major title at the US Open when he downed Djokovic to end the Serbian’s Grand Slam bid and lifted his fourth Masters 1000 trophy in Toronto, holding a 58-13 record on the season.

“Even when [my serve] was going on the line, it didn’t really have that spark,” Medvedev said. “It wasn’t enough for Sascha, who is a great player and broke me two times. Sometimes, in a way, it’s not bad, but when you’re playing in a big final on a fast surface against someone who is serving like Sascha, it’s enough to win the match. We can talk about many things, but the serve was definitely the key today, and he was better.”