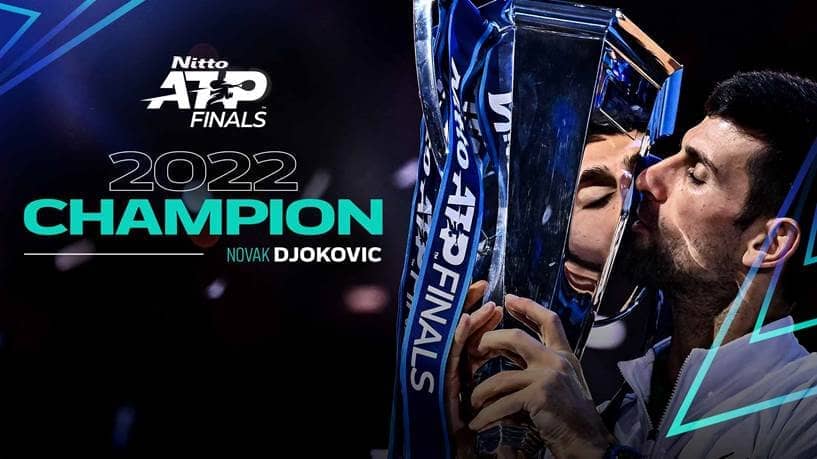 In a clash between this week’s two round-robin winners, it was Djokovic’s high-class return game that proved the difference as he carved out all five of the break point opportunities in the match. Despite some typically strong hitting from Ruud, Djokovic’s big-match mentality prevailed as he sealed a 93-minute victory at the Pala Alpitour.

“I missed a couple of forehands in the last game when I was serving for it," Djokovic said after his win. "I had nerves, but I am really grateful to be able to serve the match out. I had a big ace to close out. Seven years [since winning this title] has been a long time. At the same time, the fact that I waited seven years makes this victory even sweeter and even bigger.”

The Rome, Wimbledon, Tel Aviv and Astana champion Djokovic has now won the Nitto ATP Finals in three different cities. The Serbian triumphed in Shanghai in 2008 and in London in 2012, 2013, 2014 and 2015. The 35-year-old also becomes the oldest champion in the tournament’s 53-year history.

Djokovic is five years older than the previous oldest Nitto ATP Finals champion, Roger Federer in 2011. The Serbian has now lifted the trophy at the season finale in three different decades, yet another testament to his longevity and ability to consistently compete against the best.

“I don't know what the future holds, but I know that what I hold in my mind is a huge hunger still to win trophies,” said Djokovic in his post-match press conference. “Make history of this sport, compete on the highest level all around the world, bring good emotions to sports fans, tennis fans. That's what drives me a lot.

“I have a lot of different motivational factors, and I don't lack any motivation for the moment. Of course, we all have bad days or bad weeks. But generally the feel is still there.”

Djokovic was pleased with the way he had completed the victory in the final game against Ruud as he improved to 18-1 across his four final tour-level events of the 2022 season to lift his 91st tour-level trophy.

”It is finals. Usually these kind of matches are decided by very small margins,” the Serbian said after the match. "One break of serve was enough in both sets. I knew Casper was playing really well coming into this match. We both served really well and I think in some decisive moments, like the 12th game of the first set, I managed to put a few returns back in play.

Ruud was the first Scandinavian to contest a Nitto ATP Finals championship match since Sweden’s Stefan Edberg. Despite Sunday’s defeat, the Norwegian will finish the season at No. 3 in the Pepperstone ATP Rankings.

“To my team, another year has passed on the ATP Tour," he said at the trophy ceremony. "Thank you to everyone who helps me and pushes me everyday, Without you it would not be possible. It has been a year of many highs, some really big highs. Of course, some lows. I look forward to the next season already.”

After sealing straight-sets semi-final victories on Saturday, both players picked up where they left off in the championship match in Turin, where they hit confidently through their groundstrokes to try and pressure their opponent in some riveting early exchanges. It was Djokovic who remained the greater threat on return, however, and despite letting slip two break point chances in the second game and another in the eighth, he made a decisive move at 6-5 to seal a set in which he struck 14 winners, including six aces.

Despite a similarly tight opening to the second set, Djokovic broke through again on Ruud's serve in the fourth game as he repeatedly landed his groundstrokes near the baseline. Ruud was unable to dominate rallies with his forehand as Djokovic remained comfortable on serve to seal victory, having struck 31 winners to his opponent’s 17.

Ruud has delivered some strong performances on the big stage in 2022. As well as becoming champion in Buenos Aires, Geneva and Gstaad, the 23-year-old reached his first two Grand Slam finals at Roland Garros and the US Open and his maiden ATP Masters 1000 final in Miami. Yet he could do little to penetrate Djokovic’s rock-solid defence in Turin, where the Serbian also won 85 per cent (33/39) of points behind his first serve.

Another piece of ATP Tour history was made on Sunday. Chair umpire Aurelie Tourte became the first woman to umpire the singles final at the Nitto ATP Finals since the tournament began in 1970.