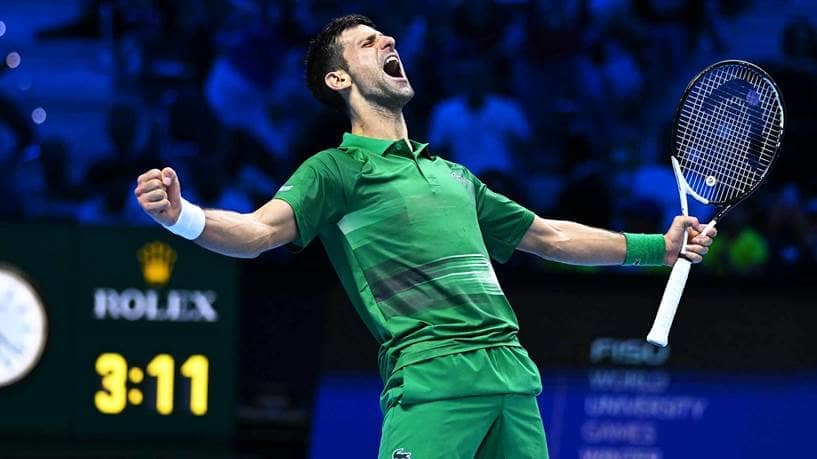 Novak Djokovic survived a lung-busting three-set marathon match with Daniil Medvedev Friday to keep alive his chances of emerging as an undefeated champion at the Nitto ATP Finals and walking away from Turin with the largest payday in tennis history.

Despite having already qualified for the semi-finals, the Serbian pushed himself to his limits against Medvedev, prevailing 6-3, 6-7(5), 7-6(2) to top Red Group with a 3-0 record, handing the 2020 champion a third straight third-set tie-break loss at the event.

Djokovic is aiming to create more history this week and tie Roger Federer's record six triumphs at the prestigious year-end event. The Serbian, who last lifted the title at the tournament in 2015, will take home $4,740,300 if he wins the trophy undefeated in Turin.

“This match against one of the greatest rivals I have today is very important, regardless of the fact that I had qualified already,” said Djokovic after his three-hour, 11-minute victory. “I really wanted to win.

"Daniil and I have had some battles in the past and I knew coming into the match today that it was going to be his last match of the season and he wouldn't want to finish with a loss. I started off very well. [I] had chances in the second [set], had some break points but he played very well in those decisive points. He was playing really quick. I didn't fell physically well in the third set, struggled a lot. It is a battle and it is a fight.

"Being able to find the last drop of energy to come back into the match. At 4-5 I managed to read his serve and anticipate well and got myself in a good position. I started off very well in the tie-break. Tough three matches for him, losing 7-6 in the third in all three matches. It is not easy, but he is an amazing player. I have a lot of respect for him and what a great battle."

In a high-quality and physical encounter, both hit their groundstrokes with fierce accuracy and power, striking heavy blows to pull each other around in Turin. Djokovic played faultlessly to clinch the first set, before Medvedev responded, sealing the second set on his fourth set point to force a decider.

With little to separate them, it was the seventh seed who prevailed in the decider, rallying from a break down as he maintained his intensity and consistency to earn his earn his 40th tour-level win of the season.

The 35-year-old will face Taylor Fritz in the semi-finals on Saturday, when his fitness will be thoroughly tested, having spent over three hours on court against Medvedev in a match that pushed both to their limits. The Greek Tsitsipas will face Andrey Rublev on Friday evening in the Red Group, with the winner advancing to play Casper Ruud.

The former World No. 1 has now won 16 of his past 17 matches, having triumphed in Tel Aviv and Astana last month.

Djokovic looked sharp throughout the match against Medvedev. He timed the ball cleanly from the baseline during the long exchanges and waited patiently for his chances to seal the first set. After failing to convert break point chances at 1-1 and 4-4 in the second set, the Serbian saved three set points at 4-5 to hold, fending off the last one by winning an epic 33-shot rally that ended on a forehand winner.

However, Medvedev would not be denied, hitting through Djokovic in the tie-break to level. In a tight third set, the fourth seed broke for 5-4 in a game that lasted for more than 15 minutes. Medvedev was unable to serve out, though, with Djokovic breaking back. With a tie-break left to decide the thriller, the Serbian pulled clear when it mattered most to improve to 8-4 in his ATP Head2Head series against Medvedev.

Djokovic demonstrated great defence throughout the clash, showcasing his agility to hang in points. The Serbian produced a Steal Score of 43 per cent, well above the Tour average of 34 per cent. Learn more about Steal Score Insights here.

Medvedev lifted the trophy at the Nitto ATP Finals in 2020, before he reached the final last season. The 26-year-old clawed past Jannik Sinner in an epic round-robin match last year when both players fates had already been sealed. In similar circumstances this year, Medvedev was on the other end of the result, though, meaning he finishes the round-robin stage 0-3.

The fourth seed ends his season holding a 45-19 record. He reached the final at the Australian Open, before he lifted tour-level trophies in Los Cabos and Vienna.