Ivanisevic On Djokovic: 'He's Still Going To Be Even Better' 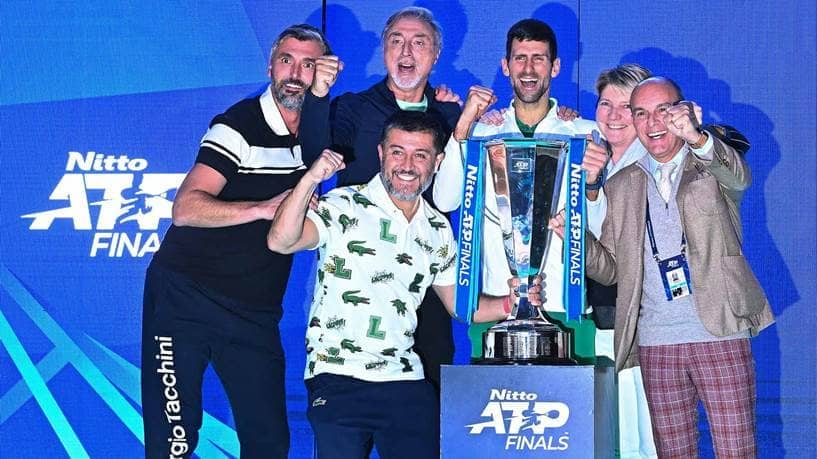 Goran Ivanisevic revealed a scary concept for the rest of the ATP Tour on Sunday evening. After Novak Djokovic won a record-tying sixth Nitto ATP Finals trophy, his coach said the Serbian will still improve.

The 35-year-old shattered the record for oldest champion in tournament history. Roger Federer previously held that record having triumphed aged 30 in 2011.

“Look at Roger couple years back. Look at Rafa. Look at him. They all talk about, yes, young players are coming. It's great for the tennis… You have [the] youngest No. 1 in the world who made unbelievable things this year, Carlos [Alcaraz],” Ivanisevic said. “But look at Novak. He's still hungry, he's still winning the tournaments, playing unbelievable tennis. He's still already thinking now about preparation for next season.”

Djokovic is known as a relentless baseliner and magnificent mover who often finds his very best tennis under the most pressure. But the Serbian’s serve was dominant Sunday against Casper Ruud, against whom he did not face a break point.

“His serve was [a] very underestimated shot all through [his] career. If you look so many matches, five, 10 years ago, his serve always saved him somehow,” Ivanisevic said. “But now he's even better. Now he always wants to improve. Especially this week, amazing percentage, amazing precision of the serve. Every time he needed, he hit [an] unbelievable first serve. His second serve is much better.

“But his serve is one of the best shots which people, they don't talk [about], because they have so many other things, they forget to talk about his serve. He has one of the best serves. Especially when it's tight, it's tough, especially this week he was hitting unbelievable serve under pressure.”

Djokovic finished his season with five titles, highlighted by his triumph at the Pala Alpitour, his 21st major at Wimbledon and 38th ATP Masters 1000 crown in Rome. According to Ivanisevic, with the way the sport has continued to move forward, Djokovic is set on continuing to evolve with it.

“He's [a] guy who wants to improve all the time. He's taking care of his body. Look at how he moves on the court, slides. He's amazing,” Ivanisevic said. “It's always something that now the world offers you to be better, to improve. I think in that case players are playing in much older age, and they're playing well. Maybe some of them, they're playing best tennis. They're looking unbelievable.”