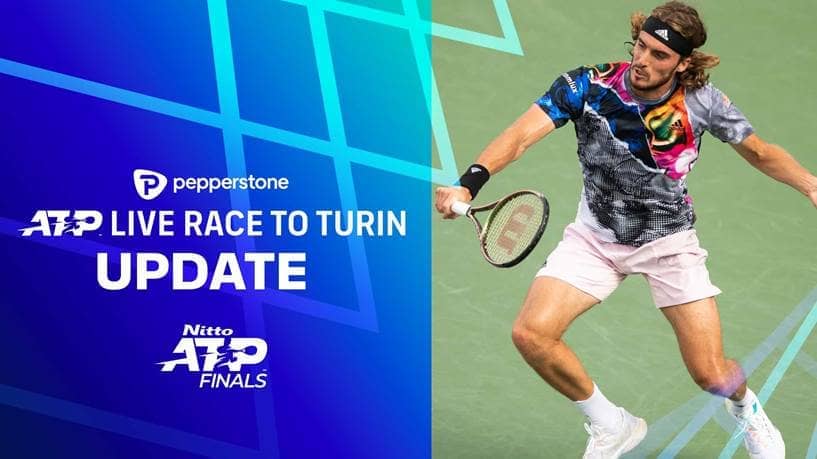 © Mike Lawrence/ATP Tour
Stefanos Tsitsipas is up to second in the Pepperstone ATP Live Race To Turin after reaching the Cincinnati final.

Nadal remains in top spot entering the US Open

Stefanos Tsitsipas fell short of lifting the Western & Southern Open trophy against Borna Coric on Sunday, but it was still a productive week of work for the Greek star. The 24-year-old is up to second place in the Pepperstone ATP Live Race To Turin.

Tsitsipas, who earned 600 points by reaching the Cincinnati final, is trying to qualify for the Nitto ATP Finals for the fourth consecutive year. In 2019, he claimed the title at the year-end championships.

The Greek (4,620 points) trails first-placed Rafael Nadal (5,630) by 1,010 points. The Spaniard, who has qualified for the season finale on 16 previous occasions, will arrive at the US Open in top spot in the Live Race.

Pepperstone ATP Live Race To Turin (as of 22 August)

Another Spaniard, Carlos Alcaraz, is in third place (4,460), 160 points behind Tsitsipas. Last year’s Intesa Sanpaolo Next Gen ATP Finals champion is trying to make the same leap Tsitsipas did from 2018 to 2019 — winning in Milan one year and triumphing at the Nitto ATP Finals the next.

Briton Cameron Norrie, who competed in Turin last year as an alternate, is trying to return to the season finale. The lefty made good progress towards that goal in Cincinnati, where he advanced to the semi-finals. Norrie climbed three spots into 11th place (2,140), 555 points behind eighth-placed Andrey Rublev (2,695), who currently occupies the final qualifying spot.

Felix Auger-Aliassime continued the best season of his career by reaching his fourth straight Masters 1000 quarter-final. Only Coric was able to halt the Canadian’s run in the last eight.

Auger-Aliassime jumped one spot into sixth place in the Live Race (2,815), as he tries to qualify for the Nitto ATP Finals for the first time. The 22-year-old owns a 115-point lead over seventh-placed Alexander Zverev (2,700) and a 120-point advantage over eighth-placed Rublev.