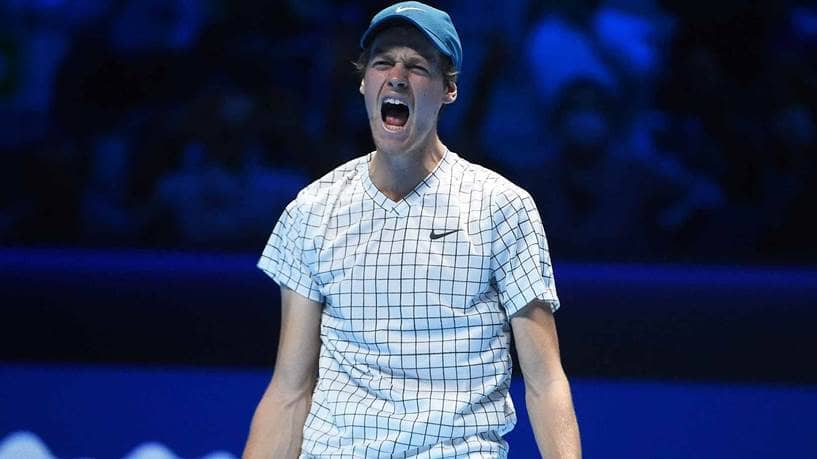 Italian Jannik Sinner gave fans in Turin plenty to cheer for on Tuesday, as he dropped just four games in his winning Nitto ATP Finals debut against Hubert Hurkacz.

Sinner, the first alternate, replaced his injured countryman Matteo Berrettini after he withdrew from the tournament due to an abdominal injury. The 20-year-old became the fourth Italian to play singles at the Nitto ATP Finals in the event’s 52-year history – and he rallied the home crowd like a veteran at the Pala Alpitour, Italy’s largest indoor sporting arena.

“I knew around 5 (p.m.) that I would play," Sinner said. "I was ready to go on court. It is an incredible feeling playing here in Italy with thousands of people cheering for you and I am trying my best. I will enjoy the moment. I played well and felt good in the warm up. It was an incredible match today.”

The World No. 11 saved all five of the break points he faced against Hurkacz, who was also seeking his first win in Turin. Sinner broke the Pole’s serve early in both sets of his 6-2, 6-2 win, and he was rock-solid from the baseline to clinch the victory in an hour and 22 minutes.

Afterward, Sinner dedicated the victory to his countryman Berrettini and signed the camera lens with a message that read: “Matteo, you are an idol.”

“Matteo has been unlucky many, many times in his career and I wish him all the best," Sinner said. "I am going to play for him at this tournament because he deserves to be here. I will give my best and it is a highlight playing here.”

As a result, Sinner is firmly in semi-final contention in Turin. He could reach the semi-final if he defeats World No. 2 Daniil Medvedev in their next match, or if Alexander Zverev loses to Hurkacz on Thursday. With two defeats, Hurkacz currently sits at the bottom of the Red Group, while Medvedev has already booked his place in the last four.

Sinner was eager to end the season on a positive note after narrowly missing out on directly qualifying for the Nitto ATP Finals. Coming into Turin, Sinner has recorded back-to-back first-round defeats in Paris (l. to Alcaraz) and Stockholm (l. to Murray).

But he was back at his world-beating best against Hurkacz, in a rematch of their Miami Open presented by Itau final. The Italian got the crowd involved early as he broke Hurkacz’s serve to go 2-1 ahead, and then fought off three break points to see through a 12-minute service game.

With the Pala Alpitour rocking, Sinner made it a five-game run from 0-1 before Hurkacz found his footing at 5-2. But the second set unfolded much like the first, and Sinner quickly halted the Pole’s nascent comeback efforts with another break at 2-1. The 20-year-old didn’t look back, as he roared to his first victory at the ATP season finale.

Did You Know...
Sinner’s victory over Hurkacz keeps him alive in the Red Group, and continues his bid to become the first alternate to qualify for the Nitto ATP Finals semi-finals.