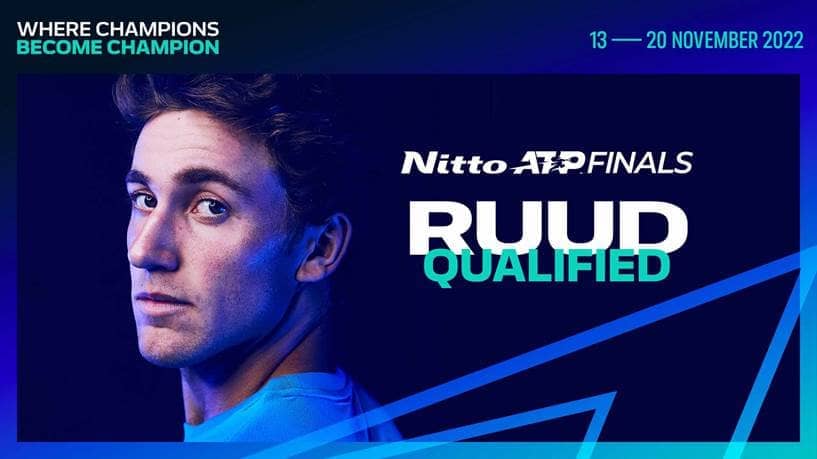 Casper Ruud on Thursday qualified for the Nitto ATP Finals for the second consecutive year, joining Spaniards Rafael Nadal and Carlos Alcaraz in the eight-player field. The season finale will be played from 13-20 November in Turin.

“I just got the news that I qualified for the Nitto ATP Finals in Turin again this year and I’m so much looking forward to coming back to Italy,” Ruud said. “I had such a great time last year, it’s a great country for tennis.”

Ruud guaranteed his spot in the year-end championships by winning his second-round match in Seoul against Nicolas Jarry. After making his breakthrough in 2021, Ruud has elevated his game to new heights this season.

The 23-year-old has tallied 47 tour-level wins, third on the ATP Tour behind only Alcaraz (52) and Stefanos Tsitsipas (49). He is at a career-high No. 2 in the Pepperstone ATP Rankings, the highest standing of any Norwegian in history (since 1973).

Ruud advanced to his first ATP Masters 1000 final in Miami and his maiden major championship match at Roland Garros. He also claimed ATP 250 trophies in Buenos Aires, Geneva and Gstaad. The 23-year-old then reached his second major final at the US Open.

Ruud made his Nitto ATP Finals debut last year at the Pala Alpitour. The Norwegian advanced to the semi-finals with victories against Cameron Norrie and Andrey Rublev before falling to 2020 champion Daniil Medvedev.