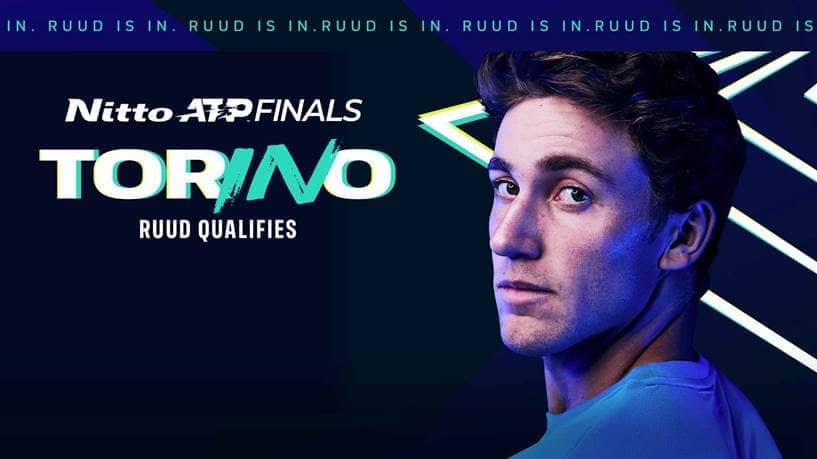 Casper Ruud will make his debut at the Nitto ATP Finals after clinching his spot on Thursday at the Rolex Paris Masters The 22-year-old is the first Norwegian to earn a spot in the season finale, to be played at the Pala Alpitour in Turin from 14-21 November.

"It's been an unbelievable year that will have the perfect end to the season," said Ruud. "It's been a stressful couple of weeks and months, because it’s been such a tight [FedEx ATP] Race [To Turin]. It’s been fun at the same time. It’s been so exciting to watch as a tennis fan, and I’ve watched a lot as well."

The Oslo native has enjoyed a breakthrough season in 2021, winning five of his six ATP Tour titles. The only other player who has lifted five tour-level trophies this year is Alexander Zverev, another Turin qualifier.

Ruud broke into the Top 10 of the FedEx ATP Rankings for the first time after winning three consecutive titles during the summer European clay-court swing at the Nordea Open in Bastad (d. Coria), Swiss Open Gstaad (d. Gaston) and the Generali Open in Kitzbuhel (d. Martinez). He became the first player to win three titles in as many weeks since Andy Murray in 2011 at Bangkok, Tokyo and Shanghai.

The son of former World No. 39 Christian Ruud also lifted trophies at the Gonet Geneva Open (d. Shapovalov) and the San Diego Open (d. Norrie). Entering the year, he had never won more than 23 tour-level victories in a season. In 2021, the Norwegian is 53-14 and has an impressive 23-7 record on hard courts.