Felix On Bubble As Battle For Turin Spots Heats Up 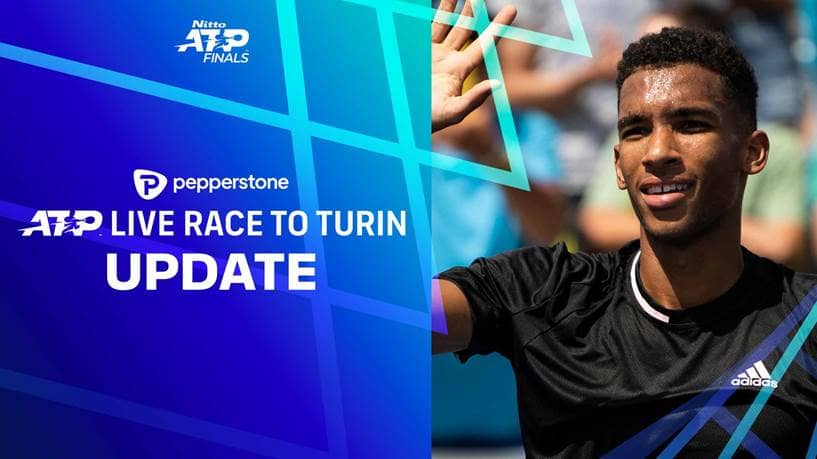 Alcaraz and Nadal have already qualified

Rafael Nadal and Carlos Alcaraz qualified for the Nitto ATP Finals during the US Open. But with two months until the season finale at the Pala Alpitour, the Pepperstone ATP Live Race To Turin is heating up.

Past qualifiers Casper Ruud, Stefanos Tsitsipas and Daniil Medvedev are all well-positioned in third through fifth places, respectively. But below them, the battle is tight.

Felix Auger-Aliassime is currently in seventh place as he tries to earn his spot at the year-end championships for the first time. The Canadian let slip an opportunity to earn buffer during the US Open, where he lost in the second round to Jack Draper. But with 2,860 points, the 22-year-old is 160 points ahead of eighth-placed Alexander Zverev, a two-time Nitto ATP Finals champion who has not competed since the US Open due to injury.

Auger-Aliassime is just 190 points behind sixth-placed Andrey Rublev, who is trying to qualify for the third consecutive year. Rublev advanced to the quarter-finals at Flushing Meadows. If 15th-placed Novak Djokovic, this year's Wimbledon champion, stays within the Top 20 in the Race as expected, then that will put the cut at seventh this year, not eighth.

Other players within striking distance are ninth-placed Hubert Hurkacz (2,545) and reigning BNP Paribas Open champion Taylor Fritz, who is in 10th place (2,385). There are five ATP 250 events two weeks later this month, when players can make their moves to climb closer to qualification or secure their standing.

The next big opportunity for the ATP Tour’s stars to make a big jump will be the week of 3 October, during which there will be ATP 500 events in Nur-Sultan and Tokyo. Among those on the Nur-Sultan entry list are Alcaraz, Medvedev, Tsitsipas, Rublev and Auger-Aliassime. Ruud, Zverev, Fritz and Cameron Norrie are scheduled to play in Tokyo.

Djokovic, who has qualified for the Nitto ATP Finals 14 times, is currently 15th in the Race. However, the Serbian is still in position to earn his spot at the Pala Alpitour.

Djokovic won Wimbledon this year, making him eligible for the Grand Slam winner rule. If there is one current-year major champion positioned between eighth and 20th in the Race, he qualifies in eighth place.