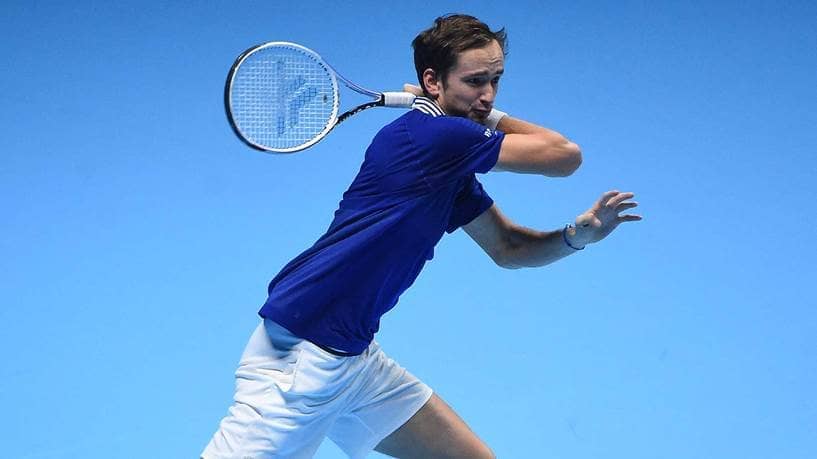 Daniil Medvedev will head into the semi-finals at Nitto ATP Finals in strong form after he captured his third consecutive round-robin win Thursday, topping Red Group with a 3-0 record.

The World No. 2, who secured qualification for the last four on Tuesday when he beat Alexander Zverev, saved two match points as he edged home favourite Jannik Sinner 6-0, 6-7(5), 7-6(8) in front of a lively crowd at the Pala Alpitour in Turin.

“It was tough,” Medvedev said in his on-court interview. “Mentally it was tough knowing the match was dead. But I did not want to lose my rhythm. I won the first set quite easily and I was like, lets continue this way. The second set was about an hour or so and then it is the third set. But you’re not going to not play the third set because I like to win, I don’t like to lose. I am happy I won.”

Medvedev has now won his past eight matches at the season finale, having defeated Dominic Thiem to lift the trophy when the event was held in London last year.

In an entertaining match, the Russian hit with consistent depth against Sinner as he used his flat groundstrokes to pin the Italian back. Medvedev recovered from a break down in the third set and saved match points at 5/6 and 7/8 in the third-set tie-break to extend his ATP Head2Head series lead against the 20-year-old to 3-0.

Medvedev, who beat Hubert Hurkacz in his opening round-robin match, will play either Casper Ruud or Andrey Rublev in the semi-finals, with the pair facing off Friday in a winner-takes-all clash. World No. 1 Novak Djokovic has already won the Green Group and will take on Zverev in the last four.

“When I know that I am in the next round and I am waiting for my opponent, I watch the match to see how they play,” Medvedev added. “So I am just going to watch it and enjoy it and wait for the winner.”

Earlier this season, Medvedev earned his fourth ATP Masters 1000 trophy in Toronto, before he ended Djokovic’s Grand Slam hopes by defeating the Serbian in the US Open final to capture his maiden major title. The Russian is now 57-12 on the year.

Medvedev flew out of the blocks against Sinner to quickly quieten the crowd inside the Pala Alpitour. The Russian hit with power and precision from the baseline in the first set, committing just three unforced errors in the set as he closed out points with ruthless efficiency to seal the opener in 26 minutes.

The second set followed a different pattern though as Sinner grew into the match. The Italian showed his grit and quality as he broke to move 3-1 ahead. However, all it did was rile up Medvedev, who broke back immediately. The pair then moved to a tie-break, and it was Sinner who held his nerve to level, raising his arms in the air as he marched back to his chair.

In a tight third set, Medvedev battled back from 2-4 as he used his experience to regain some control. But Sinner remained strong on serve as a tie-break was left to decide the match. Medvedev and Sinner played aggressively in the tie-break, with both striking the ball with great power. After saving match points at 5/6 and 7/8, it was Medvedev who secured victory after two hours and 32 minutes when he hit a backhand winner on his second match point.

The first alternate Sinner defeated Hurkacz on his debut at the season finale on Tuesday following Matteo Berrettini’s withdrawal due to a left oblique injury. However, despite a valiant effort, he was unable to make it back-to-back victories against Medvedev.

The 20-year-old won four tour-level titles in a breakthrough 2021 season and will finish the year inside the Top 10 of the FedEx ATP Rankings.