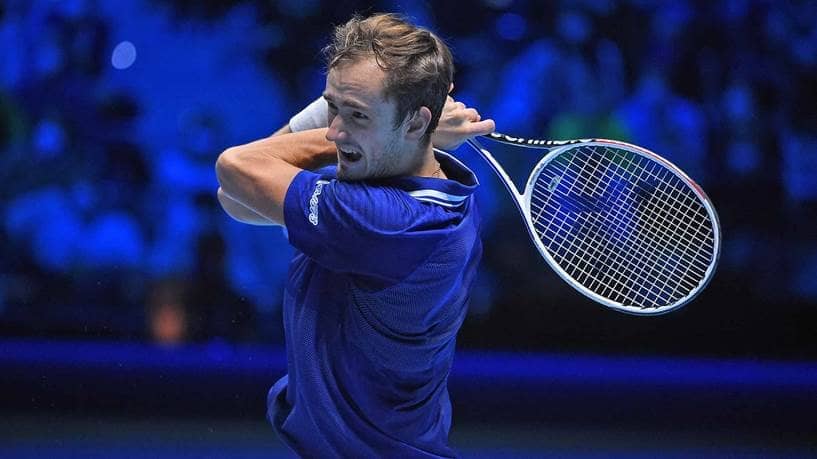 After soaring through the Red Group with three consecutive round-robin victories at the Nitto ATP Finals, Daniil Medvedev is feeling in good shape ahead of the semi-finals in Turin.

Having already qualified for the last four after defeating Alexander Zverev, the Russian faced Jannik Sinner Thursday with seemingly relatively little on the line. However, in a hard-fought clash, Medvedev saved two match points to defeat the Italian in a third-set tie-break and believes it was an important win to maintain his confidence.

“You want to win and keep the momentum, but at the same time you don’t want to go three hours 30 minutes and break your body,” Medvedev said. “The first set was tricky because in a way it was good as it was 30 minutes in my favour and I played a pretty good level.

“The second set I was 100 per cent as I wanted to try and finish the match quickly, which didn’t happen as Jannik played a great level. I am just happy to win and I will just try to be ready for Saturday.”

The 25-year-old won the title at the season finale last year in London and has beaten Hubert Hurkacz, Zverev and Sinner in Turin this week, adjusting to the fast conditions well. When reflecting on the round-robin stage, Medvedev was happy with where his game is at.

“I think the serve was really good throughout my three matches,” Medvedev said. “I got broken for the first time today. I hit a lot of aces and first serves in. When you win three matches out of three you like everything, but with the fast conditions here the serve is really important.”

The World No. 2 will next face either Andrey Rublev or Casper Ruud in the semi-finals on Saturday and will prepare for the clash over the next day.

“I am going to watch the match tomorrow and then prepare for the winner,” Medvedev said. “Sometimes it can be an advantage and sometimes a disadvantage when you have a day off before the semis, but that is how it is and I am going to take it well.”