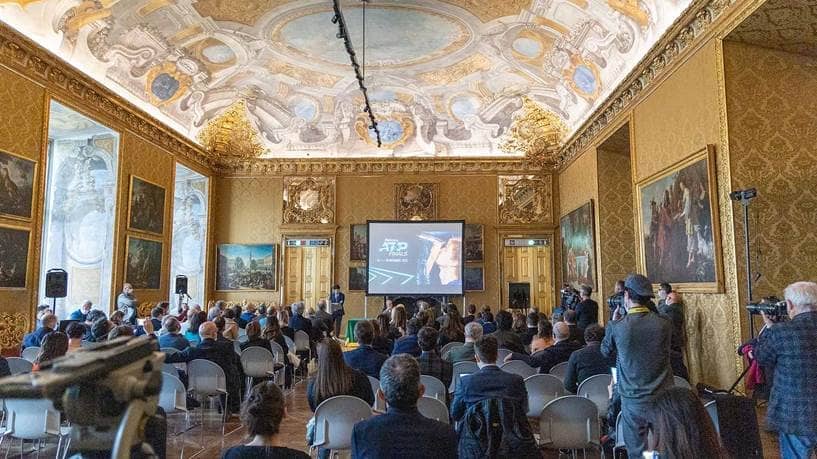 The journey that will lead to the second edition of the Nitto ATP Finals in Turin, returning to the gorgeous setting of the Pala Alpitour of Turin from the 13th to the 20th of November, came to an important stage today: the guidelines for the 2022 edition were presented together with a report on the 2021 event. The latter showed how the event contributed to creating a substantial economic return - more than 100M Euros - and received a positive rating from the vast majority of fans (90%) and both guests and partners (98%).

The presentation took place during a press conference held in one of the most beautiful palaces of the city - Palazzo Madama - with all the stakeholders of the event attending: Italian Tennis Federation (FIT) and its president Angelo Binaghi - connected from remote-; Italian government, with a video message by sports undersecretary Valentina Vezzali; Regione Piemonte, with sports council member Fabrizio Ricca; city of Turin council member for sport, tourism and major events Domenica Carretta; title sponsor of the event Nitto Denko Corporation, with a message by its President, CEO and COO, Hideo Takasaki; host partner Intesa Sanpaolo, represented by Fabrizio Paschina, Executive Director Communication & Image. Andrea Gaudenzi, ATP Chairman, closed the round of speeches.

Today’s press conference was also an opportunity to display the most important results of an in-depth analysis of the 2021 edition on a statistics and scientific base as a result of studies made in collaboration with Nielsen Sport, YouGov, Hookit and Ernst&Young. Data show not only big numbers when it comes to audience and reach – 109.7 million people from 133 countries across the world were reached through digital and social - and a high satisfaction from customers - 78% of spectators expressed their desire to return to Turin- but also a beneficial return to the territory with a total of 102.6 million euros split among direct impact (3.6 million), indirect and satellite (44.4m) and fiscal (25.6m). All numbers are connected to who organized the event and the ones attending it. All results and details about such studies are available here.

Angelo Binaghi, Federazione Italiana Tennis president:
“We are thrilled to have the chance to host the Nitto ATP Finals in Turin for the second consecutive year. We want this city to keep affirming its role as one of the world’s top tennis destinations, so that some of the most important pages in the history of our sport will be written here. The first has been composed today together with all the ones who have been with us and all the important national and international partners who contributed in making this event possible with their support. It is a first page that makes me fond and that allows the Nitto ATP Finals to have a solid base for their future in Turin. It is from such bases that we want to start our work so that the 2022 edition will be remembered for its attention to fans’ needs as they return to the Pala Alpitour. With the end of the limitations that the global pandemic imposed on the past edition, the chances to offer an even better experience with be there.”

Andrea Gaudenzi, ATP Chairman:
“The 2021 Nitto ATP Finals were a highly successful event. I would like to take the chance to thank the whole team that worked hard for such result: from the ATP to the FIT, from Nitto to the City of Turin, the Regione Piemonte and all people who helped the event. We received positive feedback from all parts: above all from players, their staff and families, but also from spectators and sponsors. We want to keep improving and we are already working for a better future for this ever-growing magnificent event. To have such major tennis tournament in Italy, in Turin, it is a great pride for all Italians.”

Valentina Vezzali, Undersecretary for sport:
“I could not let this event pass without a message and a warm greeting from my side as we formally launch the 2022 edition of the Nitto ATP Finals scheduled between 13th and 20th of November. It is an event that promises once again to bring the international spotlight and prestige to Italy and to the sport, that is to its peak level here. For this recurring event, the Government is on the side of the Italian Tennis Federation (FIT), who oversee the organization. Tennis, thanks to this tournament and its champions will be once again a showcase of Turin and the whole country to the world. It is a tournament that we are honoured to host until 2025 and that we must be able to enhance so that our best athletes could inspire many youngsters to pursue or pick up the sport. Last year, despite the pandemic, numbers were surprising for spectators, economic impact, and job positions. Thanks to their accurate organization, the ATP Finals kept as a strong point in their program the environmental sustainability, one of the goals of the Agenda 2030 and for which the Italian PNRR reserved fundings, especially when it comes to venues. The Nitto ATP Finals will be a chance to once again affirm that sport has an intrinsic ability to merge sacrifice and passions, but also to confirm that it is a valuable message for peace and solidarity. All of those are fundamental traits, especially during the difficult times that Europe is facing now that war is knocking to its doors. I have had the chance to thank numerous federations that are working to host Ukrainian sports teams, but I take the chance today to give an applause to your campaign “Tennis plays for peace”. Thanks to it and the great generosity of the big tennis community the Ukrainian people can receive substantial help. Just like last year’s edition, I am sure that the 2022 Nitto ATP Finals will confirm their deserved success and that Italy will celebrate the presence of sport in one of its highest expressions. See you soon in Turin, but for today, good luck with your work!”

Fabrizio Ricca, Regione Piemonte sports council member:
“The Nitto ATP Finals proved us that, despite the pandemic, big events could and had a right to be organized. The desire of a new start from the citizen of Piemonte region met during the event with the chance to start living again and imagining a new future. Sports competitions like these are a fundamental driving force for tourism and commerce on the territory and I am more the sure that the future ATP events will confirm such success.”

Domenico Carretta, city of Turin council member for sport, tourism and major events:
“Last year’s edition of the Nitto ATP Finals was a superb test bed for the city of Turin. It was an enthralling experience and we will do our best to match the past edition and improve in the areas where we saw room for it, especially when it comes to the involvement of the city. We have already started working on this, from the ending of the past edition, and I want to thank FIT for the great synergy. I am sure that as soon as the Eurovision Song Contest will be over, the city will live more and more intensively the countdown to the 2022 Nitto ATP Finals.”

Hideo Takasaki, Nitto Denko Corp. President, CEO and COO:
“Nitto has been the proud title partner of the Nitto ATP Finals since 2017. In 2021, together with ATP and the FIT we began an exciting new chapter in Turin. The event delivered many unforgettable moments for fans, in the city and around the world. Throughout our partnership, it is important for us to support people who keep challenging as our firm concept of being the title partner. We would like to amaze and inspire everyone involved in this event and tennis fans around the world. In Turin, we were proud to continue our CSR program as of Nitto Mascot Programme and inviting kids in the city, host our customers and employees to the first Turin event, and launch several important Sustainability Initiatives. Nitto, as a global manufacturer of high-functional materials, aim to contribute to a sustainable environment and society. We are excited to continue our support on this special event in Turin and its innovation and success for years to come. We look forward to seeing you again, in November.”

Fabrizio Paschina, Intesa Sanpaolo Executive Director Communication e Image:
“The support from the Gruppo Intesa Sanpaolo to the Nitto ATP Finals as well as to the Intesa Sanpaolo Next Gen ATP Finals underlines the focus from our Bank to the fundamental values of sport, such as fair play, healthy competitiveness, the desire to overcome our limits. Tennis and its champions are an extraordinary example of such values, and it is not by chance that Jannik Sinner and Lorenzo Musetti have become ambassadors of Intesa Sanpaolo, as role models for all boys and girls. Following the success of the first edition of the tournament that brought once again Turin to the sports spotlight worldwide, our evaluation is extremely positive and we are more than happy to be Host Partner of the event.”

Ticketing
Tickets and multi-day packages for the 2022 edition of the Nitto ATP Finals are available here. From Sunday 13th to Saturday 19th of November (round robin and semi-finals), every day will have two sessions: a day session from 11.30am (one doubles and one singles match), and an evening session from 6.30pm (one doubles and one singles match). Sunday 20th of November will have a unique session starting from 2.30pm with the doubles final, followed by the singles final.

Tournament formula
The eight participants of the 53rd edition of the Nitto ATP Finals will be decided by the ATP Race to Turin. This is the rankings table that counts the best 19 results in the 2022 solar year, considering the following rules:

The only exception to the rules is given to a winner of a Grand Slam tournament who will not be among the top 8 of the ATP Race to Turin following the final tournament of the Race (ATP Masters 1000 Paris-Bercy), but still placed among the top 20: under such circumstances, he would be granted a spot in Turin together with the top 7 of the Race.

The 8 qualifiers will be drawn into two groups for a Round Robin stage: the top-ranked player from one group will play the second-place player of the other group and the winners of these semi-finals will face for the title in final.

The same rules apply to the 8 qualifying pairs of the doubles’ Road to Nitto ATP Finals 2022.