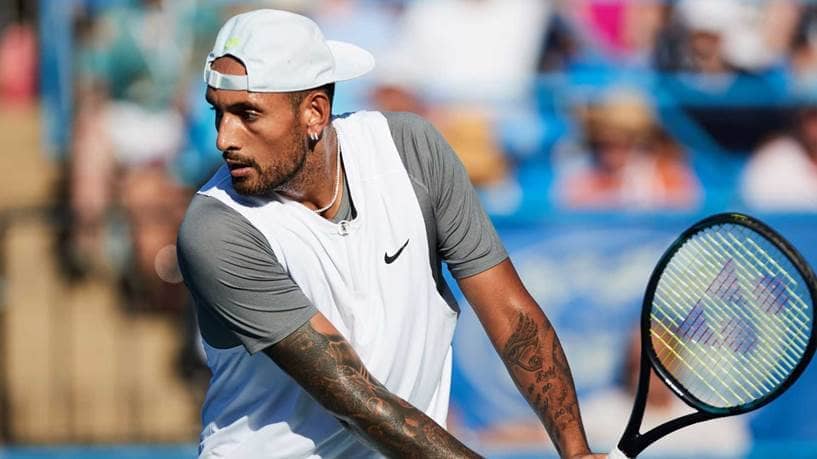 © Ryan Nixon
Nick Kyrgios wins his seventh ATP Tour singles title and his second in Washington with a dominant performance in Sunday's final.

Nick Kyrgios left the Citi Open with two trophies on Sunday as he became the first man to sweep the singles and doubles titles in the 53-year history of the Washington event. The Aussie defeated Yoshihito Nishioka in the singles final before teaming with Jack Sock to win the doubles crown, both in straight sets and without dropping serve in either match.

"I'm extremely proud of myself and my team," he said in his post-tournament press conference. "It was a really, really good week. It was hard-fought. [I] had some incredibly tough matches. Every practice was really good. I tried to be as professional as I could. I'm just happy to be sitting here, making history along the way."

Kyrgios' toughest test came in the singles quarter-finals, when he saved five match points against local favourite Frances Tiafoe before outlasting the American in the third set of a Friday evening thriller. It was the only singles set he dropped on the week as he improved to 11-1 in his past 12 matches dating back to his Wimbledon final run. Now a two-time singles champion in Washington (2019), Kyrgios has reached singles finals in consecutive tournaments for the first time.

"I think it's a reflection of the last six months of how hard I have been working," he added. "I'm just really happy to continue the form after Wimbledon. I think you have got a small window after a Grand Slam that people kind of fear you before they step out on the court. I feel like I made the most of it this week. I'm really happy with my performance."

The 27-year-old credited a strong training block prior to the Australian Open with laying the foundation for his resurgent season.

"Before Oz Open, I decided that I really wanted to put in a good training block, and then things just started falling into place," he explained, later noting the added motivation of providing for his girlfriend. "The rest of my life... just everything was really good. I had a great Australian Open. I felt like the tournaments after the Australian Open I was kind of reinventing myself a little bit on the court. I was incredibly intense, playing some really good matches, had some great results earlier in the year.

"[I] played a great grass-court season, made a couple semi-finals and was right there. I was always knocking on the door of a singles title. I was waiting for it. I felt like I was one of the best players in the world this year by far."

Now up to 21st place in the Pepperstone ATP Live Race To Turin, Kyrgios has put himself within touching distance of a spot in the 2022 Nitto ATP Finals. If he can ride his red-hot form all the way to the title at the National Bank Open Presented by Rogers, the Aussie could move as high as ninth place, just outside of the eight qualifying places.