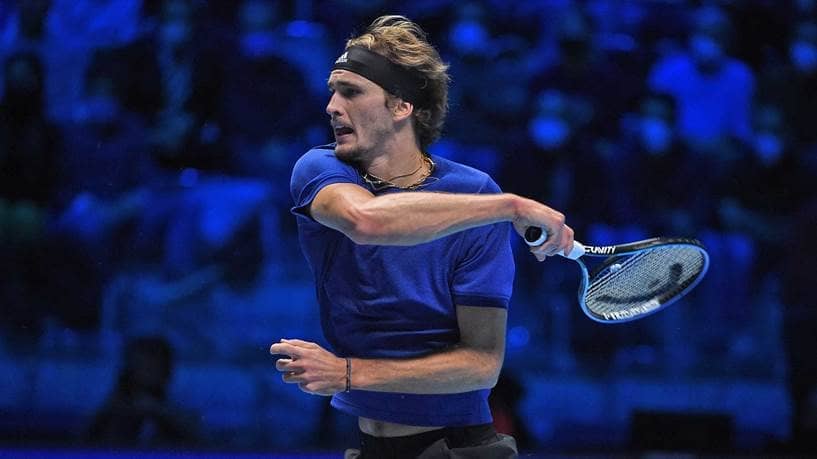 Alexander Zverev stood up and delivered Saturday in front of a lively crowd at the Nitto ATP Finals as he produced a high-quality performance, edging Novak Djokovic 7-6(4), 4-6, 6-3 to set up a final showdown with Daniil Medvedev in Turin.

The German, who beat Djokovic in the 2018 season finale championship match, played bravely and hit with great depth in the crucial moments against the Serbian. Zverev saved a set point in the first set and closed the net effectively throughout to advance after two hours and 29 minutes in an entertaining match.

The 24-year-old engaged with the fans inside the Pala Alpitour and hit 35 winners to reduce his ATP Head2Head series deficit to 4-7 against the World No. 1.

“Every time we play it takes hours,” Zverev said in his on-court interview. “I have not spent more time on court with anybody other than him this year. I am happy with the win and happy to be in the final here and to give myself the best chance for tomorrow.”

With his victory, Zverev avenged his US Open semi-final defeat to Djokovic. It is the second time the 18-time tour-level titlist has beaten the top seed this year, after upsetting him en route to clinching the Tokyo Olympic singles gold medal.

Zverev, who went 2-1 in Red Group action to qualify for the last four, will face Medvedev in the final on Sunday after the Russian cruised past Casper Ruud 6-4, 6-2. Medvedev leads Zverev 6-5 in their ATP Head2Head series, having defeated the 24-year-old in a third-set tie-break in the round-robin stage earlier this week.

Zverev will now try to do what he did in 2018 when he won the title by reversing a round-robin loss to the player he's meeting in the championship match.

“I lost 8/6 in the third in the group stage, so I am just looking forward to the match as I think it will be a great one,” Zverev said. “There is only the best here, so it takes a lot to win this tournament.

“I am looking forward to having another chance and we are in the final and I am happy to be in the final. He is one of the best players in the world right now, so It is going to be a difficult match no matter what.”

The World No. 3 has now earned 58 tour-level wins this season. The German triumphed at ATP Masters 1000 events in Madrid and Cincinnati, while he also lifted trophies in Acapulco and Vienna.

Both players were strong on serve in a tight first set, which roared into life near its conclusion. Firstly, Zverev saved a set point at 4-5, 30/40 with a huge first serve, which he greeted with a roar, before Djokovic fended off two break points in the following game. The Serb saved the second one by serving and volleying as he found great depth with his half-volley backhand to hold. In a tense tie-break, Zverev then increased his focus and power to move ahead.

The second set followed a similar pattern, with Djokovic winning 80 per cent of his first-serve points, while Zverev claimed 81 per cent of points behind his first delivery. In the ninth game of the set, Djokovic stepped up on return, breaking when Zverev could only hit a forehand into the net following a deep backhand from the World No. 1. Djokovic then converted his fifth set point on serve to force a decider.

However, Zverev regained his momentum in the third set as he kept Djokovic at bay with his heavy-hitting. The Serb won just 41 per cent of second serve points in the match compared to Zverev, who won 63 per cent. After breaking to move 3-1 ahead, Zverev was clinical on serve, fending off one break point at 4-2, before sealing his victory with one of the 14 aces he hit in the match.

Djokovic was aiming to draw level with Roger Federer and capture his record-equalling sixth Nitto ATP Finals title in Turin. The 34-year-old, who last triumphed at the season finale in 2015, arrived in Turin in form after lifting his 37th Masters 1000 trophy in Paris earlier this month.

The World No. 1 did not drop a set in the round-robin stage, but was unable to find his top level in the semi-final as he came up against an inspired Zverev on Saturday.