Djokovic Reveals What 'Is More Important Than Winning Or Losing' 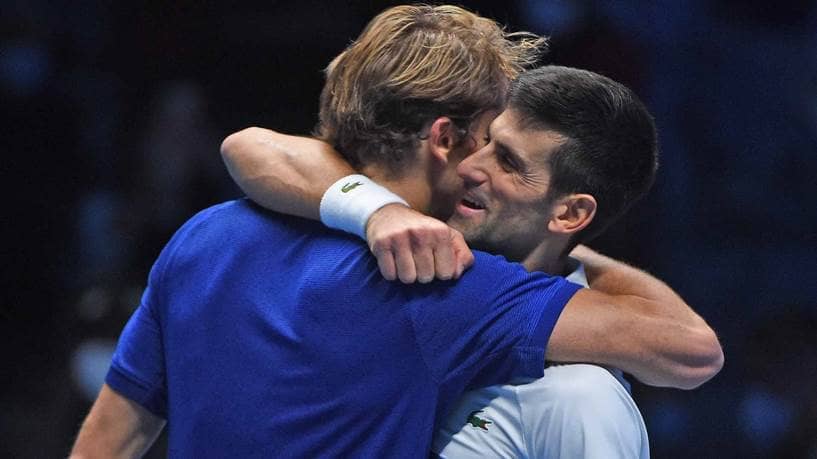 Novak Djokovic suffered a stinging defeat on Saturday evening in the semi-finals of the Nitto ATP Finals against Alexander Zverev, but he still had a big smile on his face as he embraced the German at the net.

They are foes on the court, but friends off it with plenty of respect for one another win or lose.

“Of course we want to win against each other, but there is that respect and appreciation for each other that is more important than winning or losing. That's something that I always had with Sascha. I really appreciate that,” Djokovic said. “I wish him all the best. He's a great guy, fantastic tennis player, I'm sure soon to be a Grand Slam champion.”

Zverev also ended Djokovic’s dreams of completing a Golden Slam earlier this year in the semi-finals of the Tokyo Olympics. Although the Serbian was disappointed not to triumph in Turin and tie Roger Federer’s record for most Nitto ATP Finals titles (6), he did not show it when congratulating the 2018 champion.

“Sascha is also a friend off the court. We get along very well. Not easy to be very close obviously when you're rivals, playing that much against each other on the biggest stage,” Djokovic said. “But we talk a lot about life, about a lot of different things. I'm always happy to share some of my experiences with him. We've always had a wonderful relationship.”

“He's one of the best servers in the world… He showed tonight why that is a fact. He got himself out of trouble a few times with [his] serve,” Djokovic said. “I was serving pretty good, as well. I just had the one very bad game in the third set. Three forehands, one backhand unforced error, really from pretty easy positions. [I] just really wasted the match in that game. Even though I thought it was quite even, had some chances to come back, 2-4 down in the third, just missed again, a forehand long.

“[It was a] tough match. But I enjoyed it. I thought it was a really good battle, really high-quality tennis. We pushed each other, as we always do.”

The match lasted two hours and 28 minutes, but Djokovic was adamant he was not tired. He simply played one bad game in the decider and it cost him.

“I could have gone for another few hours, no problem. It was just a bad game, 2-1 down in the third set, a very bad game, four unforced errors,” Djokovic said. “In the conditions like this where you have one of the biggest servers in the game, it's just difficult to come back from that. That's all it is.”

Djokovic still had a tremendous season. In 2021, he broke Federer’s mark for the most weeks at World No. 1 and finished atop the year-end FedEx ATP Rankings for a record-breaking seventh time — passing his idol, Pete Sampras.

The recent Rolex Paris Masters champion also claimed three major titles at the Australian Open, Roland Garros and Wimbledon to draw level with Federer and Rafael Nadal for the most in history with 20. This was also his 10th trip to the semi-finals of the season finale.

“It was a great season, no doubt. I did not play many tournaments, but still managed to end the year at No. 1 for the seventh time, broke records for the year-end No. 1, historic No. 1, won three out of [the] four Slams,” Djokovic said. “The year was phenomenal. Maybe could have done better in some other ATP events. But all in all really good ending of the season as well with a title in Paris and semi-finals here.”