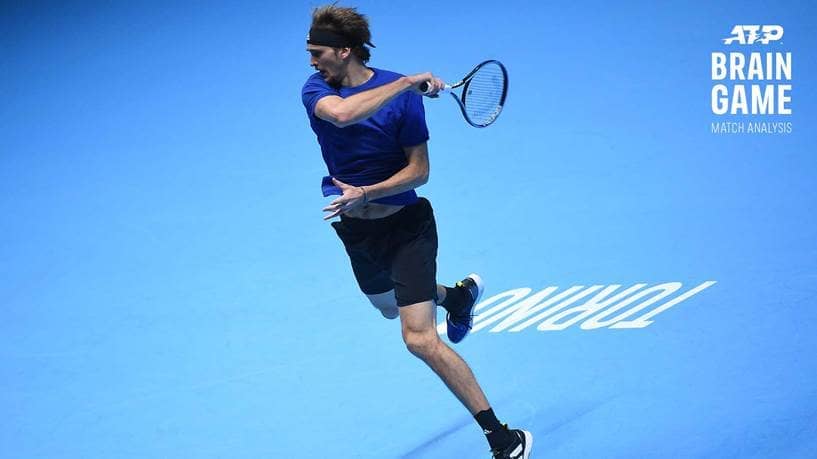 You can’t run through a brick wall. But you can walk around it with great success.

Alexander Zverev hit only 47 per cent forehand groundstrokes against Daniil Medvedev in their round-robin match at the Nitto ATP Finals in Turin last week. Medvedev squeaked that one out 6-3, 6-7(3), 7-6(6).

Zverev updated his game plan to hit 57 per cent forehands in Sunday’s final against Medvedev, defeating the Russian 6-4, 6-4 to win his second crown at the season finale. The change of strategy was a “win-win” for Zverev, as he got to hit his more potent forehand weapon more often and he forced Medvedev to rely a lot less on his proverbial brick-wall backhand.

Zverev’s forehand started on shaky ground, missing four times in the opening game of the match with two forehand groundstroke errors and two forehand return errors. He actually missed five of the first six forehands he hit to start the match. But it was Medvedev’s forehand that would miss the mark four times in the second and third games of the match, as Zverev broke early for a 2-1 lead, and he never looked back. Not overplaying Medvedev’s rock-solid backhand was a key to the stunning victory.

Zverev was skillfully doing all he could to avoid, or walk around, the Medvedev backhand that has traditionally given him so many problems. Medvedev had won the past five matches against Zverev, with the Russian getting the better of the backhand-to-backhand exchanges.

Medvedev was broken early in both sets in Sunday’s final, dropping serve at 1-1 in the opening set and in the very first game of the second set. In the opening set, Medvedev started his service game with two forehand errors to drop into a 0-30 hole. He was broken three points later. With Medvedev serving at 0-0, 30-40 in the first game of second set, he missed a forehand wide to gift the break to the German.

The biggest shot from the back of the court in the final was Zverev’s forehand, which averaged 76 mph to Medvedev’s 73 mph. Both backhands were slower, averaging in the 60 mph range.

In their robin-robin match, Zverev only directed 42 per cent of his shots wide to the Deuce court to Medvedev’s forehand. That total rose to 52 per cent in the final, as Zverev far preferred to trade blows with forehands rather than trying his luck against Medvedev’s impenetrable backhand.

After a shaky start with his forehand, Zverev settled down to collect seven forehand winners while committing 14 forehand rally errors. Medvedev’s numbers were similar (eight winners / 15 errors), as the Russian tried to “red-line” with his forehand in the second set to get back in the match.

Zverev relies heavily on a strong backhand cross court as the foundation of his baseline game. But five straight losses to Medvedev meant that something strategically had to change. Zverev had to ask himself the age-old question in our sport: Is it more important to hit the ball where you want to hit it, or more important to hit it where your opponent does not want it?

Zverev’s successful adjustment to not keep banging his head against the brick wall shows he finally figured that one out.