Alcaraz Wins US Open Title & Rises To World No. 1 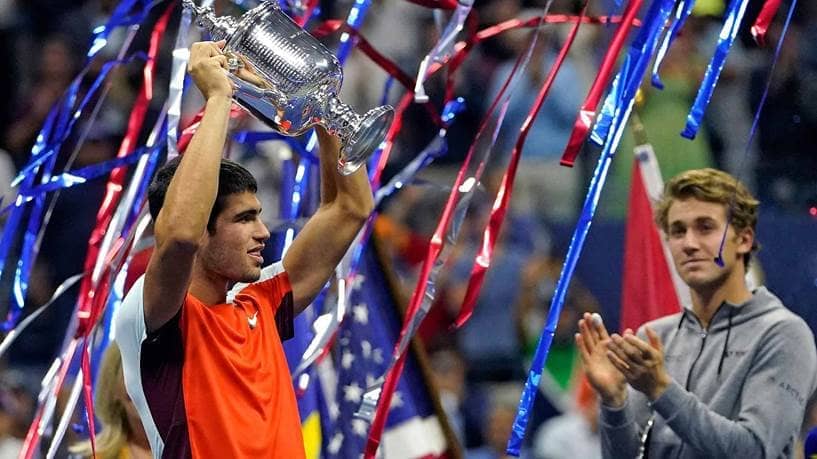 On a historic evening at the US Open, Carlos Alcaraz overcame Casper Ruud 6-4, 2-6, 7-6(1), 6-3 to clinch his first Grand Slam trophy and secure the No. 1 Pepperstone ATP Ranking.

With the world watching in a winner-takes-all final, the Spaniard hit with explosive power and demonstrated impressive touch around the net, winning 34/45 (76 per cent) of net points to outlast the Norwegian on Arthur Ashe Stadium. The 19-year-old opened his shoulders, played aggressively and handled the pressure in the fourth set to earn his 51st tour-level win of the season after three hours and 20 minutes.

An emotional Alcaraz dropped to the floor following his historic victory as he received roars of support from the New York crowd. He then climbed up to his player box to embrace his team, including coach Juan Carlos Ferrero.

“It is something I have dreamt of since I was a kid. To be No. 1 in the world, to be champion of a Grand Slam, is something I have worked really, really hard [for],” Alcaraz said during the trophy ceremony. “It is tough to talk right now, I have lots of emotions. This is something I have tried to achieve. All the hard work I have done with my team and my family. I am just 19 years old, all the tough decisions have been with my parents and my team as well. It is something that is really special for me."

“There is no time to be tired in the final rounds of a Grand Slam...You have to be ready and give everything you have inside. It is something I work really hard for," Alcaraz said. 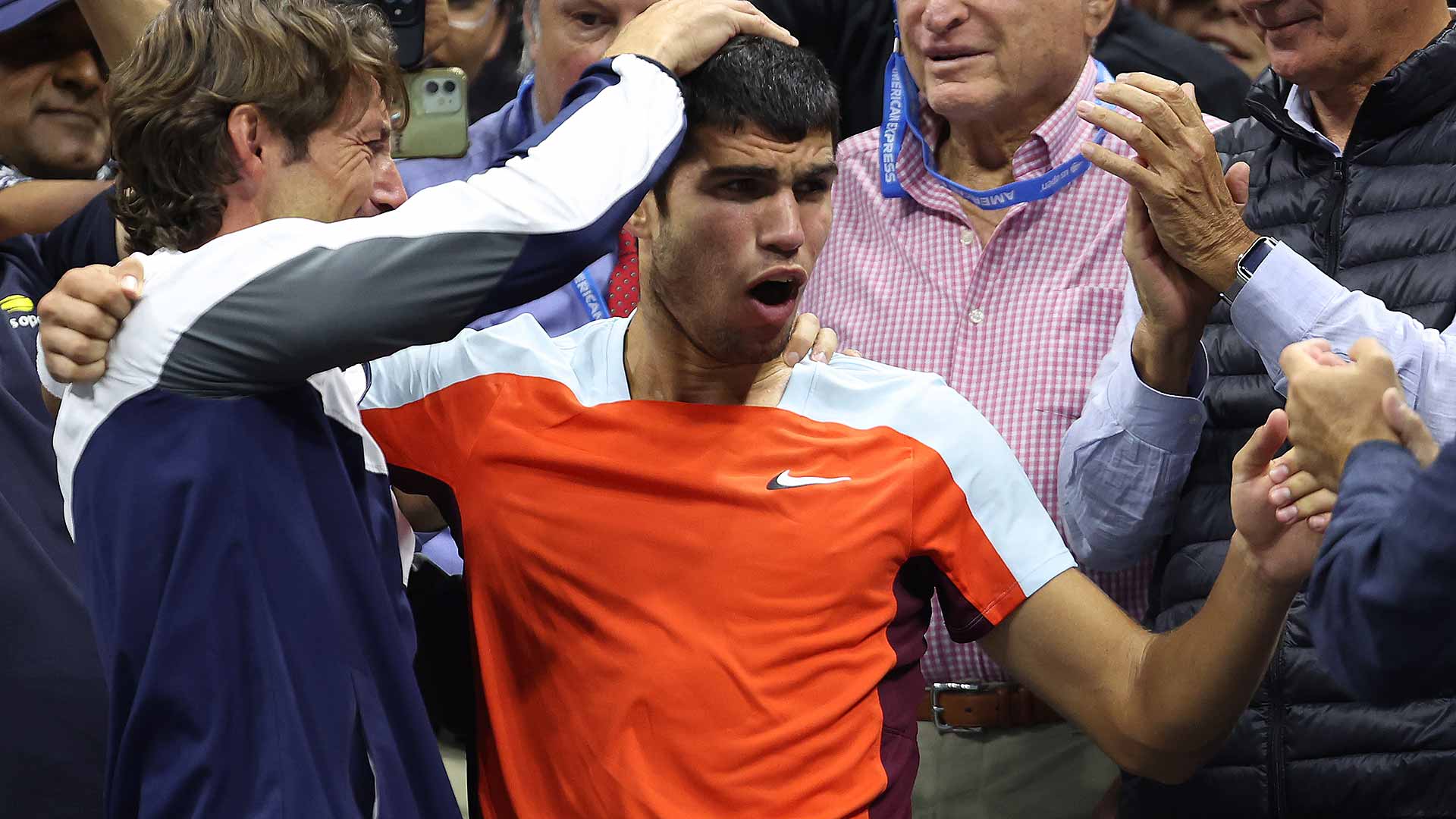 Photo Credit: Getty Images
The 19-year-old has become the youngest Grand Slam champion since countryman Rafael Nadal, 19, lifted the trophy at Roland Garros in 2005, while he is the youngest US Open titlist since Pete Sampras, 19, in 1990.

The dream becomes reality.@carlosalcaraz is a Grand Slam champion. pic.twitter.com/sPFaAiVFNR

The 2021 Intesa Sanpaolo Next Gen ATP Finals winner arrived at Flushing Meadows as the World No. 4. However, he leaves the hard-court major in top spot, becoming the youngest player to rise to the top of tennis’ mountain in the history of the Pepperstone ATP Rankings (since 1973).

Alcaraz has also equalled the biggest jump to No. 1, while he is the fourth Spaniard to climb to the top, joining coach Ferrero, Carlos Moya and Nadal.

In a lively first set, both looked to attack second serves, stepping inside the baseline on return to earn the first blow in the brutal baseline exchanges. Alcaraz and Ruud fended off two break points in their opening services games before the Spaniard made his move to break for 2-1 when Ruud struck a forehand wide. The third seed, who hit 13 winners in the set, consistently scampered around the baseline to turn defence into attack, while he moved forward effectively to close points at the net.

Ruud refused to go away at the start of the second set and began to hurt Alcaraz more with his penetrating groundstrokes. The fifth seed crucially saved a break point at 2-2, before he broke Alcaraz in the following game to gain a foothold and belief. Ruud started to come out on top in the all-court exchanges, while he reduced his mistakes, committing just two unforced errors in the set to level.

Alcaraz flew out of the blocks at the start of the third set to move 2-0 ahead. However, he started to show signs of fatigue, impacting his footwork and decision making which allowed Ruud to work his way back into the set. The Norwegian used his backhand slice to drop the ball at Alcaraz’s feet when the Spaniard came forward and also caused damage off the forehand wing, blasting the ball through the court and finishing points at the net to close out all-court rallies that had the crowd on their feet.

A pumped-up Alcaraz stayed with Ruud, though. He saved two set points on serve at 5/6 with aggressive net play, before he handled the pressure in the third set tie-break to regain the lead. The Spaniard, who won 79 per cent (31/39) of net points across the first three sets, lifted his arms in the air as he walked back to his chair.

Alcaraz then opened his shoulders and went back to basics in the fourth set to finish the job. He pulled Ruud from corner to corner with his flat groundstrokes and stayed calm on serve to capture his historic win.

In a dramatic run at the hard-court major, Alcaraz showcased an abundance of quality and grit to move through the field. He edged Marin Cilic, Jannik Sinner and Frances Tiafoe in late-night five-set thrillers to advance to his maiden Grand Slam final, saving one match point against Italian Sinner.

The Spaniard spent 23 hours and 39 minutes on court during the fortnight, passing Kevin Anderson at Wimbledon in 2018 for most time played at a single Grand Slam tournament on record (since 1999).

However, he didn’t let up against Ruud as the match went on, signifying the physical progress he has made. The Spaniard struck 55 winners and broke three times to improve to 3-0 in their ATP Head2Head series, having also defeated the 23-year-old in the Miami final in April.

Ruud, who was competing in his second major final after losing to Nadal at Roland Garros in June, was also bidding to become the 28th player and first Norwegian to jump to No. 1. The fifth seed, who captured his 44th tour-level win of the season when he downed Karen Khachanov in the semi-finals, was unable to cope with Alcaraz’s aggressive net play and relentless pressure during the crucial moments.

A worthy final between the new 1 and 2 players in the world. pic.twitter.com/NO2TwwOmVE

However, the nine-time tour-level titlist is up to No. 2 in the Pepperstone ATP Live Rankings following his run in New York. Earlier this season, Ruud lifted ATP 250 trophies on clay in Buenos Aires, Geneva and Gstaad. The 23-year-old is currently third in the Pepperstone ATP Live Race To Turin as he aims to qualify for the prestigious end-of-year event for a second consecutive year. Ruud advanced to the semi-finals on debut at the tournament last November.

“Things have been going so well. Today was a special evening,” Ruud said during the trophy ceremony. “Both Carlos and I knew what we were playing for and what was at stake. We will be No. 2 and No. 1 in the world tomorrow, I think it is fitting. I am disappointed of course that I am not No. 1, but No. 2 is not bad either. I am happy with that number and I will continue to chase for my first Grand Slam title and No. 1 ranking.”

Alcaraz has now captured a Tour-leading five titles this season, including ATP Masters 1000 trophies in Miami and Madrid. The 19-year-old, who reached the last eight on debut in New York 12 months ago, qualified for the Nitto ATP Finals following his quarter-final win against Sinner earlier this week. He was the second player to book his spot in Turin after countryman Nadal.

Did You Know?
Alcaraz is the first player since Novak Djokovic at Wimbledon in 2019 to save a match point en route to a Grand Slam title, having saved one against Sinner. The Serbian Djokovic saved two against Roger Federer in the 2019 final at The Championships.