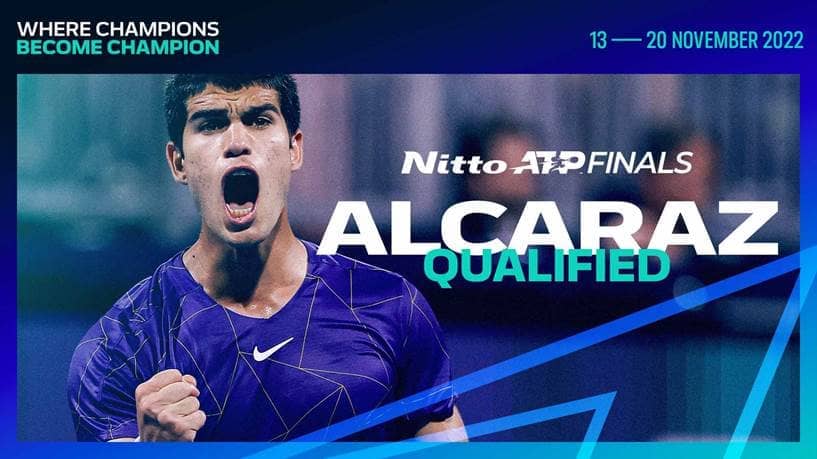 Carlos Alcaraz on Wednesday became the second player to qualify for the Nitto ATP Finals, joining fellow Spaniard Rafael Nadal. The 19-year-old will compete in the season finale, to be played from 13-20 November in Turin, for the first time.

Alcaraz clinched his place at the year-end championships when he defeated Jannik Sinner in the US Open quarter-finals. He will play in the Nitto ATP Finals one year after triumphing at the Intesa Sanpaolo Next Gen ATP Finals in Milan. Alcaraz is the youngest player to qualify for the event since Nadal was a 19-year-old in 2005 (he did not play).

The Spanish teen is second in the Pepperstone ATP Live Race To Turin. However, he has an opportunity to leave Flushing Meadows as the youngest World No. 1 in the history of the Pepperstone ATP Rankings. Alcaraz can achieve the feat by lifting his first major trophy or if he reaches the final and Casper Ruud does not.

After triumphing in Milan last year, Alcaraz has taken his level to new heights in 2022. The pupil of former World No. 1 Juan Carlos Ferrero has rewritten the record books this season, becoming the third-youngest ATP Masters 1000 titlist in the series’ history (since 1990) in Miami. The teen followed that up with a second Masters 1000 victory in Madrid, where he became the first player to beat Nadal and Novak Djokovic at the same clay-court event.

Alcaraz also became the youngest ATP 500 champion in history in Rio de Janeiro, and lifted another ATP 500 trophy in Barcelona. By advancing to the US Open semi-finals, the Spaniard improved his record on the season to 49-9.

Alcaraz will be the third Intesa Sanpaolo Next Gen ATP Finals champion to compete in the Nitto ATP Finals. Stefanos Tsitsipas and Sinner have both accomplished the feat.