Alcaraz Soars To Second In ATP Race To Turin, Led By Nadal 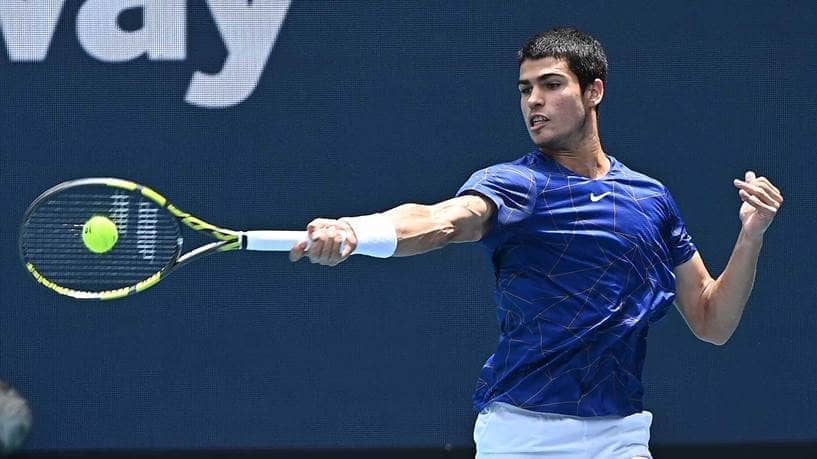 Medvedev is third in the Race, followed by Fritz

Carlos Alcaraz is not just the future, but the present.

After winning his first ATP Masters 1000 title on Sunday at the Miami Open presented by Itau, the Spanish teen soared to second place in the ATP Race To Turin, which will decide the eight players who compete at the Nitto ATP Finals from 13-20 November.

After last year's Miami Open presented by Itau, Alcaraz was 110th in the Race. But the reigning Intesa Sanpaolo Next Gen ATP Finals champion already has 1,950 points thanks to his title Sunday along with an ATP 500 trophy at the Rio Open presented by Claro and a semi-final run at the BNP Paribas Open among other impressive results. He is 18-2 on the season and pursuing his first berth into the season finale in Turin.

The only player ahead of Alcaraz is his idol and countryman Rafael Nadal, who claimed a record-extending 21st Grand Slam title at the Australian Open. The 35-year-old, who has 3,350 points, enjoyed the best start to a season of his career by winning his first 20 matches. Nadal owns a 1,400-point lead over Alcaraz leading into the clay-court season.

The man who ended Nadal's perfect start to 2022 was American Taylor Fritz, who is fourth in the Race with 1,520 points after winning his first Masters 1000 title at Indian Wells. Like Alcaraz, the American is also trying to qualify for the Nitto ATP Finals for the first time.

Daniil Medvedev, who has earned a spot at the year-end championships in each of the past three years, is third with 1,900 points. The 2020 Nitto ATP Finals titlist is 16-5, including a run to the Australian Open final, where he lost against Nadal in five sets.

The fifth through eighth spots in the Race currently belong to 2019 champion Stefanos Tsitsipas (1,440), Felix Auger-Aliassime (1,420), Andrey Rublev (1,390) and Casper Ruud (1,020). Of that quartet, Auger-Aliassime is the one chasing his first Nitto ATP Finals qualification. Ruud climbed 14 spots into eighth after advancing to his maiden Masters 1000 final in Miami.

The top two Italians in the Race are ninth-placed Matteo Berrettini (945) and Jannik Sinner (800).

Did You Know?
Seven of the top eight players in the Race are 26 or younger. The only exception is 35-year-old Nadal, who first competed in the Nitto ATP Finals in 2006, when the event was called the Tennis Masters Cup.