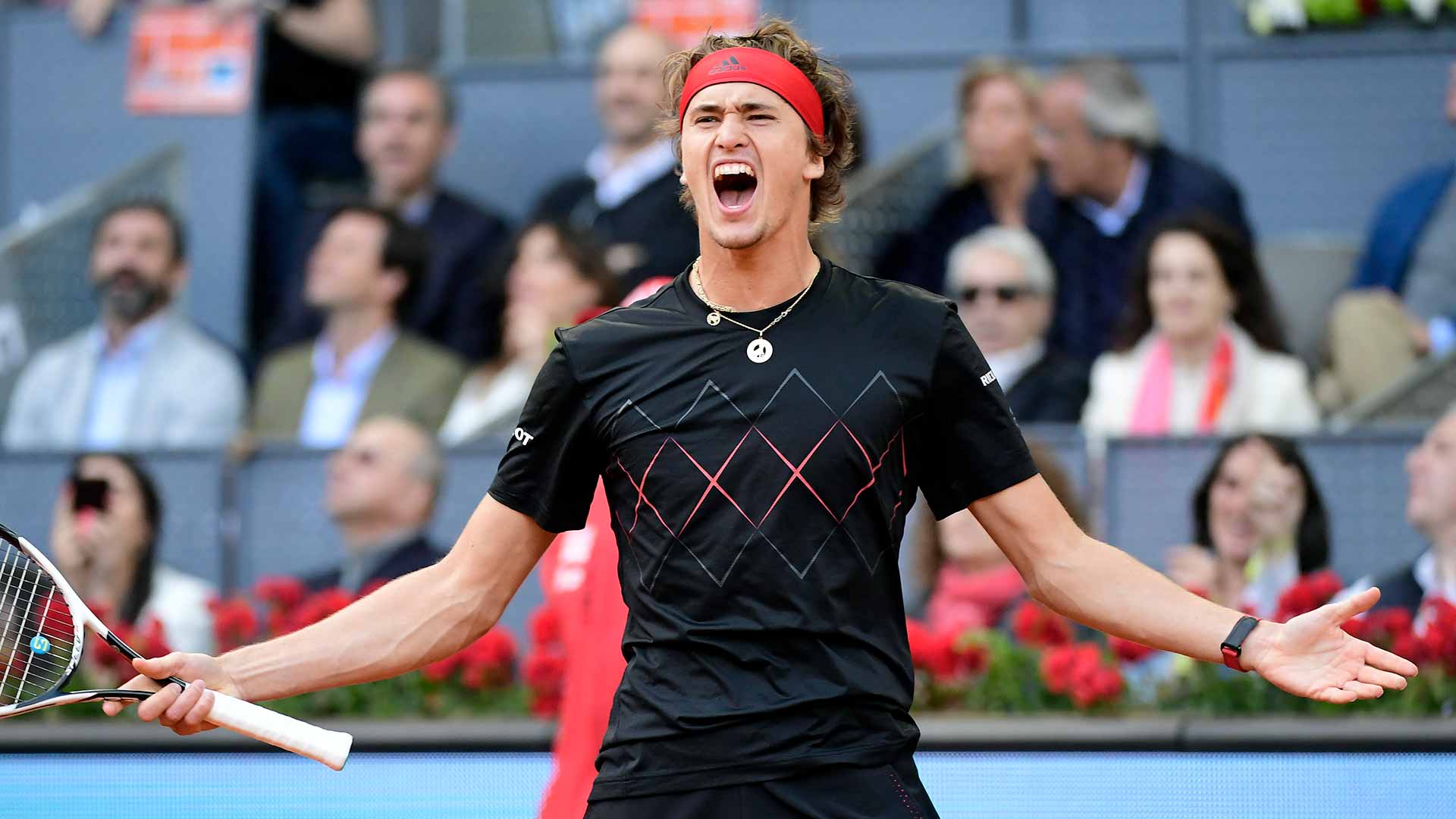 It was a magical performance in the Magic Box.

No breaks surrendered, no sets relinquished. Alexander Zverev did not just win his third ATP World Tour Masters 1000 crown on Sunday. The German dominated the Mutua Madrid Open from start to finish, streaking to victory with a stunning display of aggression.

Zverev overcame Dominic Thiem 6-4, 6-4 on Sunday to claim victory in Madrid for the first time. He secured the title with ruthless aplomb, notching his third different Masters 1000 trophy. The 21-year-old becomes the fifth active player with a trio of titles at the elite level, joining Rafael Nadal (31), Novak Djokovic (30), Roger Federer (27) and Andy Murray (14).

"All in all, I'm just really happy with how I played, that I could win my third Masters," said Zverev. "So far it's been pretty good for me on clay this year. Hopefully I can continue this kind of streak in Rome. Obviously the altitude fits me a little bit with my serve, with how I play, with me playing a little bit more aggressive than maybe others. That definitely fits me. But I just feel confident and comfortable right now.

"In general, the last 10 days have been pretty good, winning two titles in this time. One in Germany and this one here is massive. It's been unbelievable. I'm not going to lie. I'm just going to do everything I can to continue this kind of streak, get the performance I had here in Rome."

As chaos ensued in the top half of the draw, with five-time champion Nadal losing in the quarter-finals and fourth seed Juan Martin del Potro being ousted in the third round, Zverev escaped unscathed from the bottom half. Convincing straight-set wins over Evgeny Donskoy, Leonardo Mayer, John Isner and Denis Shapovalov were followed by Sunday's victory over Thiem.

Also the champion on home soil in Munich last week, Zverev has now won 18 consecutive sets, making a significant statement to the rest of the ATP World Tour. His victory in Madrid marked the second straight year in which the champion has not relinquished a set. Nadal also achieved the feat in 2017.

As proceedings got underway on a sun-kissed late afternoon in the Spanish capital, Zverev wasted no time in sending an immediate message. The second seed would snatch a break in the first game of the match, with unforced errors beginning to leak from Thiem's usually steady game.

Zverev refused to allow Thiem to move forward and attack inside the court, which was the Austrian's recipe for success against Nadal on Friday. He put Thiem on the back foot often, crowding the baseline and imposing his authority off the ground. Another quick break to open the second set would prove decisive. He would claim a tour-leading 26th match win of 2018 after one hour and 19 minutes, firing 15 winners, while benefiting from 21 unforced errors off Thiem's racquet.

Sascha's Mastery Of The Masters

Having entered the day trailing 1-4 in their budding FedEx ATP Head2Head rivalry, Zverev dented Thiem's stranglehold. His lone previous win came at the China Open two years ago, with Thiem claiming their three previous clay-court encounters, all in 2016 as well.

Zverev earns €1,190,490 in prize money and 1,000 ATP Rankings points with the title, while Thiem secures €583,725 and 600 points. The World No. 7 finishes as runner-up in Madrid for the second straight year, having fallen to Nadal in the 2017 championship. He caps an impressive week, which saw him rally from a set down twice and exact revenge over Nadal in Friday's quarter-finals.

"It was I think an average match from both of us," admitted Thiem. "I just couldn't maintain my level from the match against Rafa and the match yesterday against Anderson. That was the problem today.

"He had one break in the beginning of every set. It is a very bad start. In general, I was playing not good enough. He was not serving better than Anderson yesterday. I had many returns on the racquet, but just didn't make them, or played it too easy back for him. He was immediately in the offense.

"I didn't have great results in the last weeks in Monte-Carlo and Barcelona, but here I got my self-confidence full back, even though I lost today. It was still a good week. I just played bad today, that's it. There is no reason to be worried... I will learn from it. In general, it was a very good week. I hope I will get more chances to win a first Masters."

Next stop for both competitors: the Internazionali BNL d'Italia, where Zverev begins his title defence on Tuesday against either Frances Tiafoe or Matteo Berrettini. One year ago, the German staked his claim as one of the game's elite, with his maiden Masters 1000 crown in the Italian metropolis.