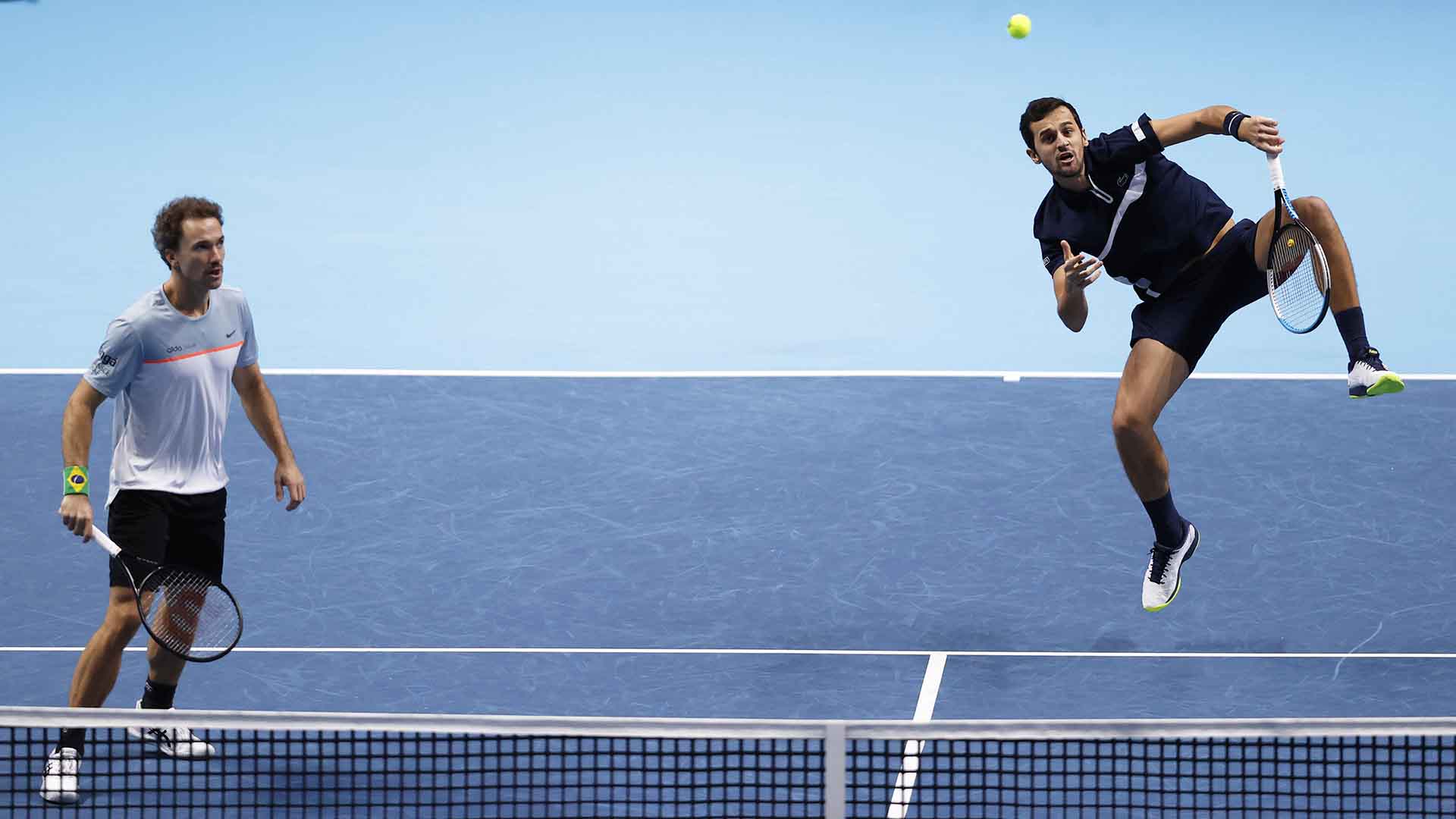 Mate Pavic (right) and Bruno Soares (left) are aiming to finish the 2020 ATP Tour season as the No. 1 team in the FedEx ATP Doubles Team Rankings. © Clive Brunskill/Getty Images

Mate Pavic and Bruno Soares increased their chances of reaching the Nitto ATP Finals semi-finals on Friday with a 6-7(2), 6-3, 10-8 win against John Peers and Michael Venus.

The top seeds won 83 per cent of first-serve points (33/40) to end Group Bob Bryan with a 2-1 record. The US Open champions will have to wait until the evening session to find out if they have qualified for the last four at The O2. Marcel Granollers and Horacio Zeballos will meet Jurgen Melzer and Edouard Roger-Vasselin in the final Group Bob Bryan match. As a result of Pavic and Soares' Match Tie-break win, Granollers and Zeballos have qualified for the semi-finals.

”To be honest, I don’t really know what we need [this evening],” said Soares in an on-court interview. “We are going to watch because we love doubles, we love entertainment. I think we did what we had to do, which is win the match. Right now, it is not in our hands anymore. We have just got to wait and hopefully we come back to play another match tomorrow.” 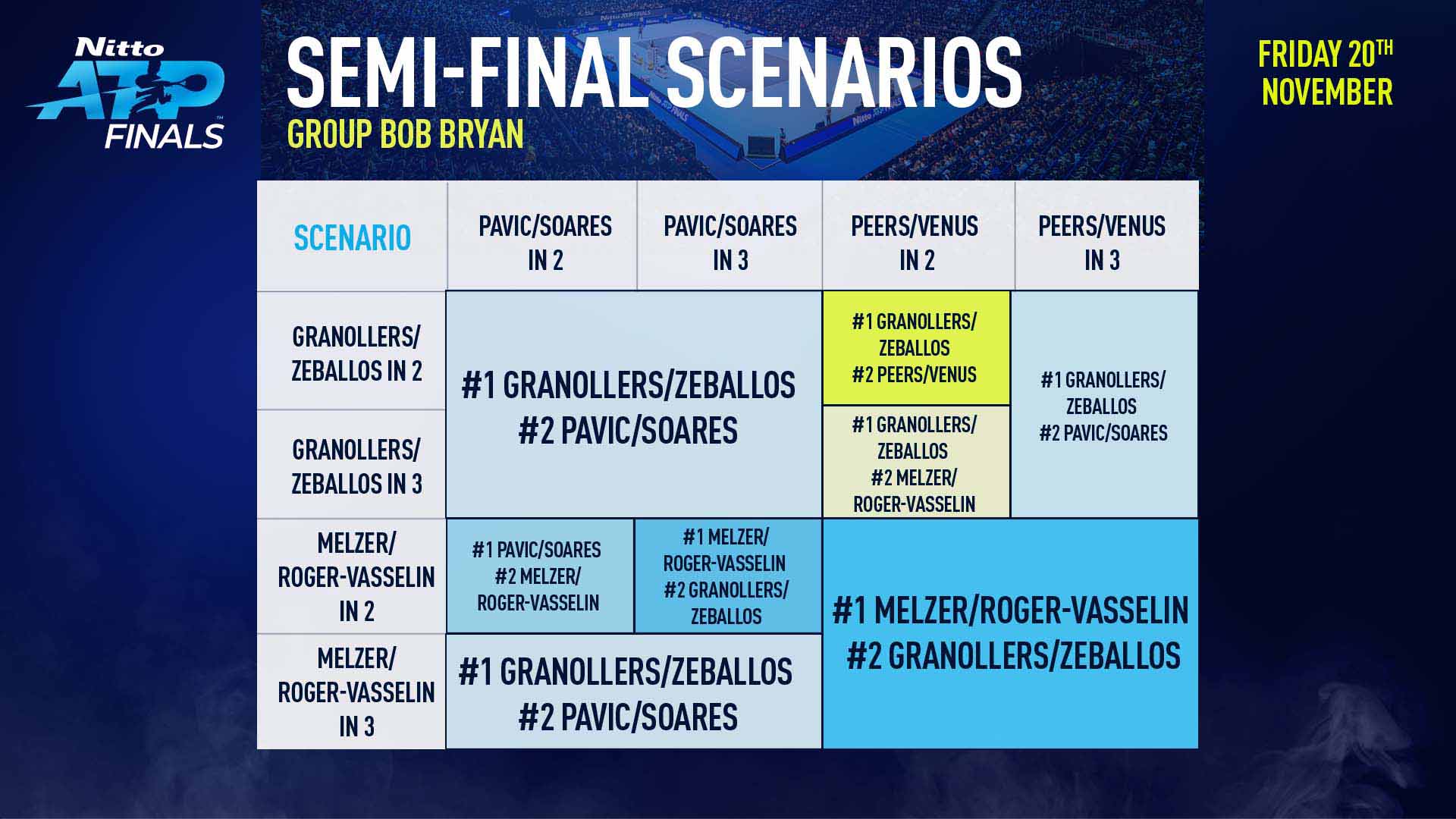 Pavic and Soares improved to 22-11 as a team this year after 89 minutes. The top seeds, who won their maiden Grand Slam trophy as a team at the US Open in September, are seeking their second title of 2020.

Pavic and Soares broke serve in the opening game with sharp returning and won their first 16 points on serve to establish a 5-3 lead. But Peers and Venus, who needed to win in straight sets to keep their qualification hopes alive, made a remarkable comeback. Venus saved four consecutive set points with powerful serving and Peers saved two more in the following game to level the score at 5-5. The sixth seeds rode the momentum into the tie-break and converted their first set point when Pavic failed to control a backhand return.

When Pavic and Soares were asked in the on-court interview about what they were saying to each other after failing to convert six set points in the first set, Soares gave an honest response.

“Let’s book the flight home, that is what we said” said the Brazilian. “[It was] another tough set that we lost. We played extremely well [in the] first set and it is tough to lose a set like this. It was quite a similar story the other day. I think we both stayed calm… tried to keep the cool. We were both pretty upset with the first set and I think we managed to do that.”

Pavic and Soares recovered from the disappointment of dropping the first set, as they extracted volley errors to earn break point at 2-1 in the second set. Soares converted the pair’s first opportunity with a backhand winner down the line. Pavic held his nerve at the net to clinch the second set on a deciding point at 5-3.

In the Match Tie-break, Pavic and Soares rallied from 5/7 by winning five of the next six points to earn their second win of the week. Pavic converted their second match point with a swinging ace out wide.

Peers and Venus finish Group Bob Bryan with a 0-3 record. The sixth seeds end their 2020 ATP Tour season with three trophies and a 22-13 record. Peers and Venus claimed titles in Dubai, Hamburg and Antwerp earlier this year.

Did You Know?
Pavic and Soares are one of three teams who can still finish as the year-end No. 1 pair in the FedEx ATP Doubles Team Rankings.