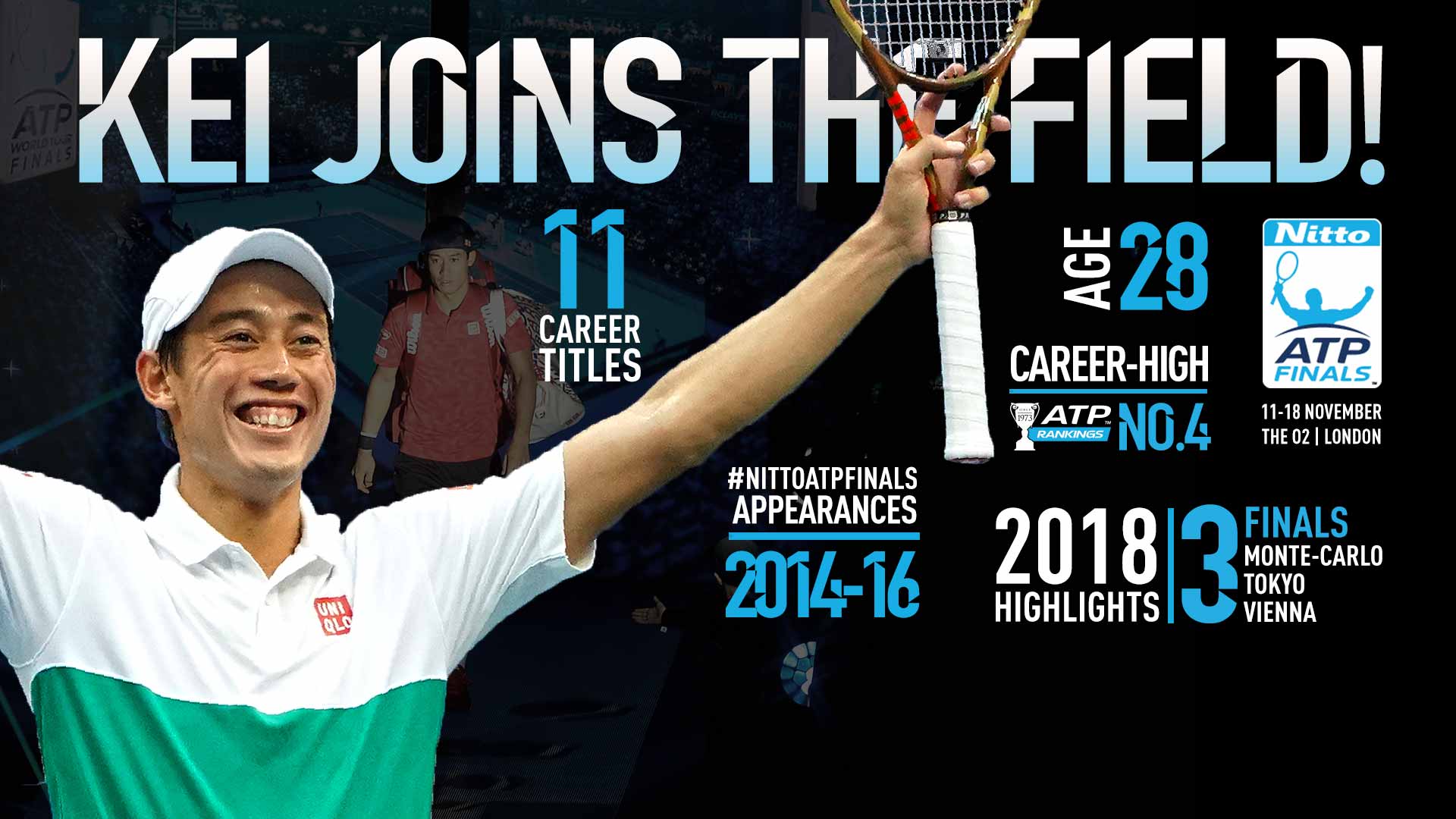 Kei Nishikori will compete at the 2018 Nitto ATP Finals, to be held at The O2 in London from 11-18 November, following the withdrawal of Juan Martin del Potro due to a right knee injury. Nishikori will join Novak Djokovic, Rafael Nadal, Roger Federer, Alexander Zverev, Kevin Anderson, Marin Cilic and Dominic Thiem at the elite eight-player event.

Del Potro, who reached a career-high ranking of No.3 earlier this season, continues his rehabilitation following an injury sustained while competing at the Rolex Shanghai Masters in October, but is unable to recover full fitness ahead of London.

“It’s frustrating for me not to be able to compete in London,” said Del Potro. “It’s a very special tournament and I’ve tried everything possible to get my knee better. The rehabilitation is making good progress, but I need more time. Of course, it’s disappointing for me right now, but I had a very good season overall.”

The 28-year-old Nishikori will make his fourth appearance at the season finale (also 2014-16), having reached the semi-finals at the Nitto ATP Finals on two occasions, his debut in 2014 and in 2016 (l. to Djokovic both times). The Japanese star is only the third player since 1994 to have won an ATP Challenger Tour title (Dallas) and qualified for the Nitto ATP Finals in the same season, following in the footsteps of Ivan Ljubicic (2005) and Robin Soderling (2009).

Nishikori, who returned in January 2018 after a five-month lay-off due to a right wrist injury, captured his sixth ATP Challenger Tour title — and first since 2010 — at Dallas (d. McDonald) in February, but fell to No. 39 in the ATP Rankings on 2 April, his lowest position since No. 47 on 10 October 2011. He advanced to three ATP World Tour finals this year, his fourth ATP World Tour Masters 1000 final at the Rolex Monte-Carlo Masters (l. to Nadal) in April, and two 500-level events last month: the Rakuten Japan Open Tennis Championships (l. to Medvedev) and the Erste Bank Open 500 (l. to Anderson). Since the start of the US Open, where he reached his third Grand Slam championship semi-final (l. to Djokovic), he has advanced to at least the quarter-finals at six consecutive tour-level events. Nishikori, who will finish the year in the Top 10 for the fourth time (also 2014-16), also reached his first Wimbledon quarter-final (l. to Djokovic) in July.

The Nitto ATP Finals welcomes more than 250,000 fans to The O2 arena annually, as well as generating global viewership figures reaching an average of 95 million each year, as the ATP’s best eight singles players and doubles teams compete over eight days at the biggest indoor tennis tournament in the world.