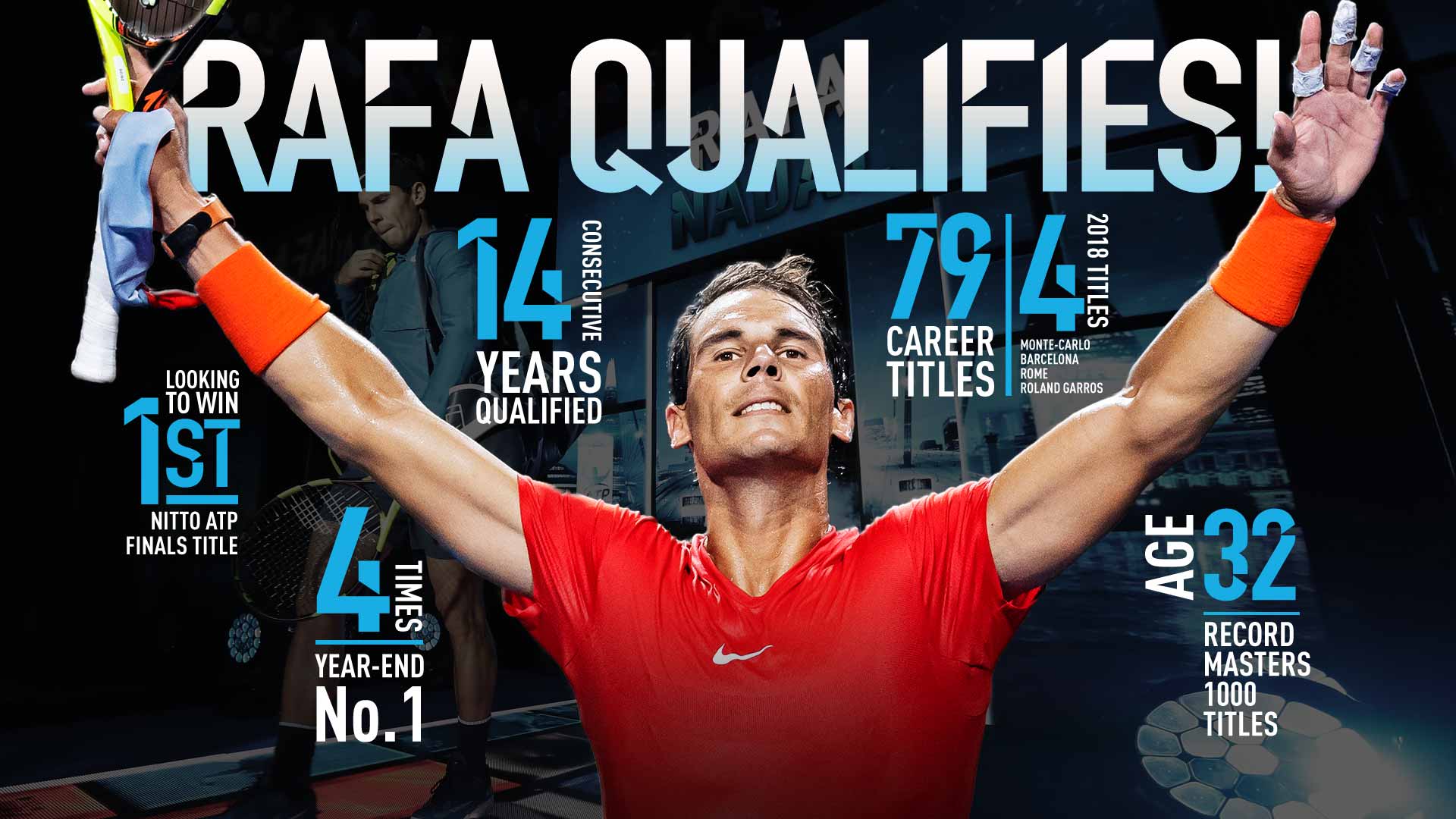 Rafael Nadal becomes the first singles player to qualify for the 2018 Nitto ATP Finals, clinching his place in the elite field for a 14th straight year with his victory over Marin Cilic on Friday night in the Rogers Cup quarter-finals.

This November at The O2 in London, the Spaniard will attempt to add to a remarkable resume that includes four year-end No. 1 finishes, a record 32 ATP World Tour Masters 1000 titles and 17 Grand Slam trophies. Nadal, who made his tournament debut in 2006, reached the final in 2010 and ’13.

“It's my 14th qualification for the [Nitto ATP Finals] in a row, so it's great news,” he said.

Nadal has been close to unbeatable since returning in April from a right hip injury to claim an ATP-best four titles. The World No. 1 triumphed at the Rolex Monte-Carlo Masters and Barcelona Open Banc Sabadell for a record 11th time each, contributing to his 50 straight sets won on clay – an Open Era record for a single surface. He followed with his second Masters 1000 title of the season at the Internazionali BNL d’Italia in Rome. A week after his 32nd birthday, Nadal claimed a record 11th trophy at Roland Garros. En route to the title at the clay major, he became only the fifth player in the past 50 years to record 900 match wins. He improves to an impressive 38-3 season record, after reaching the semi-finals at Wimbledon and, this week, in Toronto.

Nadal is looking to finish as the year-end No. 1 in consecutive years for the first time and for the fifth time overall, which would tie Jimmy Connors and Roger Federer on the leaderboard – one behind Pete Sampras. Next week, on 18 August, will mark 10 years since Nadal first rose to World No. 1.

Nadal and Federer have shared the No. 1 ATP Ranking throughout the 2018 season, and the Spaniard can extend his already-sizeable lead over the Swiss entering the Western & Southern Open should he win his fourth Rogers Cup title on Sunday. Federer, 37, returns to action next week at the Masters 1000 tournament in Cincinnati.

Alexander Zverev, a winner of three ATP World Tour titles this season, is next in line to qualify for the Nitto ATP Finals. The 21-year-old German is followed in the ATP Race To London by six-time champion Federer, who will be aiming to make his 16th appearance at the season finale, and past qualifiers Juan Martin del Potro, Novak Djokovic, Marin Cilic and Dominic Thiem. Wimbledon finalist Kevin Anderson, who is aiming to qualify for the first time, began the week in the eighth position and will climb in the Race standings on Monday with his run in Toronto; he will play #NextGenATP star Stefanos Tsitsipas on Saturday for a place in his first Masters 1000 final.

The Nitto ATP Finals welcomes more than 250,000 fans to The O2 arena annually, as well as generating global viewership figures reaching an average of 95 million viewers each year, as the ATP’s best eight singles players and doubles teams compete over eight days at the biggest indoor tennis tournament in the world.