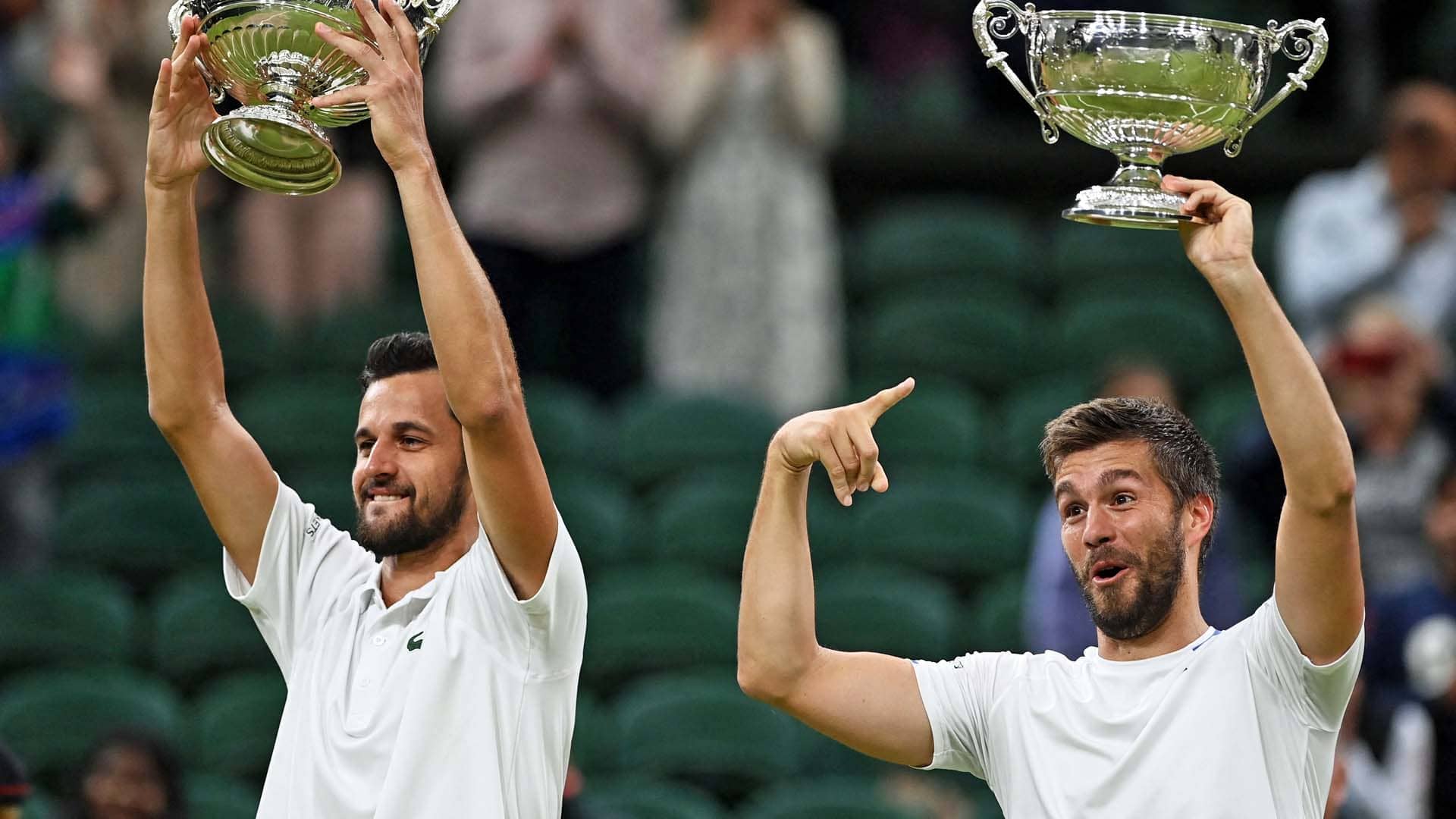 In their first Grand Slam doubles final as a team, top seeds Nikola Mektic and Mate Pavic sealed the biggest victory of their sterling season on Saturday after taking down Marcel Granollers and Horacio Zeballos in four sets to win the Wimbledon doubles trophy.

Mektic and Pavic became the first Croatian players to win the Wimbledon men’s doubles title. They are also the first players from their country to triumph at the All England Club since Goran Ivanisevic’s 2001 victory in singles and Ivan Dodig's 2019 mixed doubles win with Latisha Chan.

“This is something special, this is by far the best tournament in the world… Especially for me and I think for Nikola also, we all grew up with Goran [Ivanisevic]. It’s been 20 years since he won the Monday final, and this is the first time there is another Croatian winning the trophy,” Pavic said, fighting back tears during the trophy ceremony. “We are very emotional. I had a tough final a few years ago, so I’m super happy and very emotional.”

The Croatian duo have been the most dominant team of the 2021 season, and they already punched their ticket to the Nitto ATP Finals by reaching the Wimbledon semi-finals. Mektic and Pavic teamed up at the start of the year, and they never looked back as they lifted a tour-leading eight trophies leading up to this fortnight, including three at the ATP Masters 1000 level in Miami, Monte-Carlo and Rome.

The top seeds were tested every step of the way at Wimbledon, having to battle through a tough five-setter to move past eighth seeds Marcelo Melo and Lukasz Kubot in the quarter-finals and a roller-coaster four-set battle against Rajeev Ram and Joe Salisbury to reach their first Grand Slam final.

Mektic and Pavic made a strong start under the Centre Court roof as they claimed a decisive break at 3-3 to seal the tightly contested opening set against fourth seeds Granollers and Zeballos. They had trouble containing the Spanish and Argentine duo, who didn’t give up any opportunities on their serve in the second set. But the Croatians continued to press, and they earned a double fault on set point to close out the tie-break.

The first all-Croatian team to win a Grand Slam 🇭🇷

Nikola Mektic and Mate Pavic win the Gentlemen’s Doubles title with a 6-4, 7-6(5), 2-6, 7-5 victory against Marcel Granollers and Horacio Zeballos#Wimbledon pic.twitter.com/ObHONohBfT

The Hispanic duo raced in front in the third set, breaking early and opening up a 4-0 lead. But Mektic and Pavic bounced back in the fourth, creating four break opportunities across three of their opponent’s service games. With the pressure at a max, the fourth seeds sent a lob long as Mektic and Pavic collapsed to the ground in elation, sealing the victory after two hours and 47 minutes.

“We just kept pushing. We just kept telling ourselves, let’s just dig every point, let’s not give up.”

Granollers and Zeballos were bidding to win their first Grand Slam doubles title – either as individuals or as a team – as well as become the first Spanish and Argentine man, respectively, to win the Wimbledon men’s doubles title.