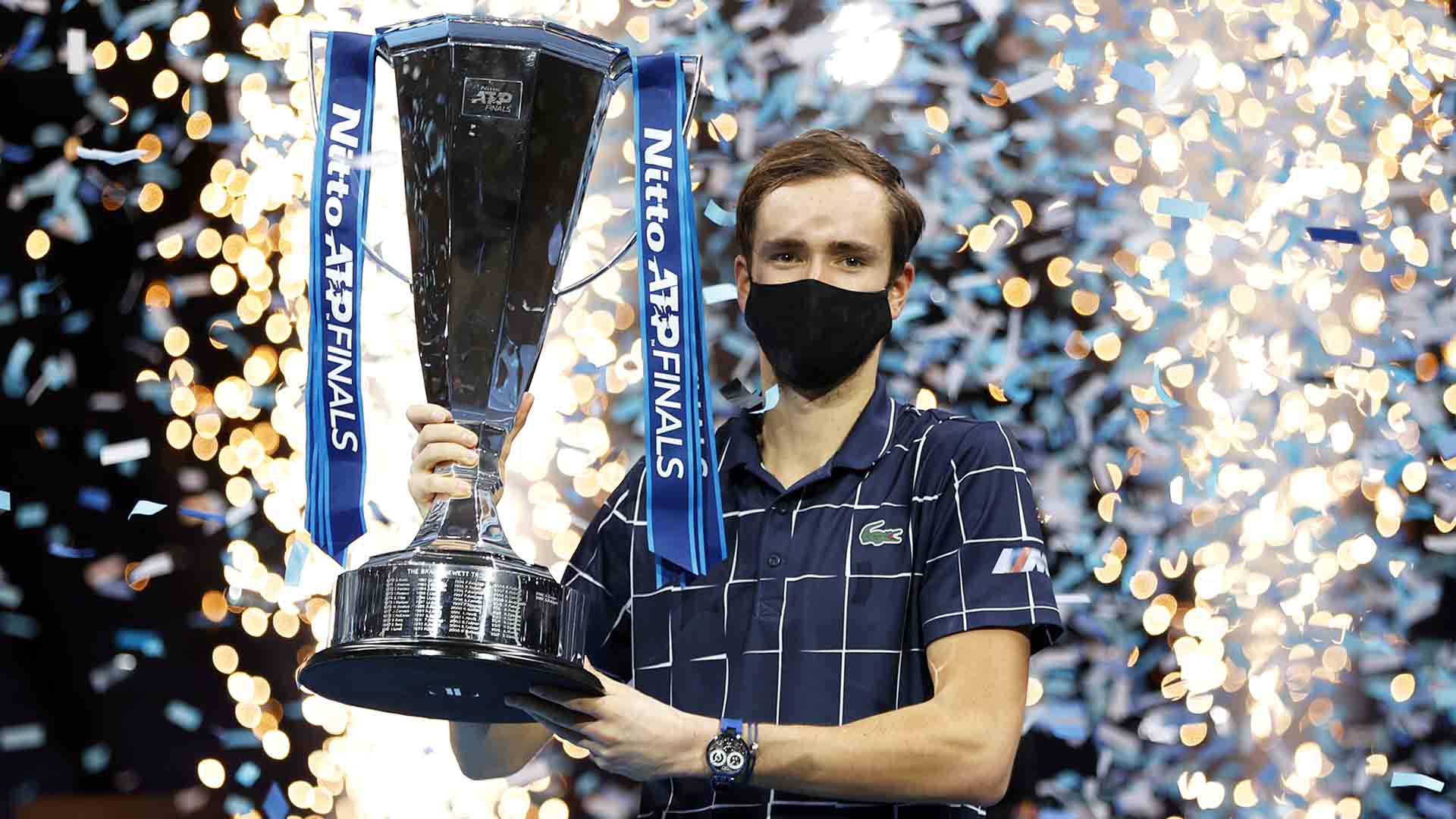 Daniil Medvedev is the first player to beat the Top 3 players in the FedEx ATP Rankings in a single edition of the Nitto ATP Finals. © Clive Brunskill/Getty Images

Over the past week at The O2 in London, Daniil Medvedev won each of his five matches and became the first player in Nitto ATP Finals history to beat the top three players in the FedEx ATP Rankings at the same edition of the tournament.

The Russian was rewarded with the biggest trophy of his career, 1,500 FedEx ATP Rankings points and $1,564,000 in prize money. As a result of his milestone victory, the World No. 4 was also flooded with messages on his phone and social media accounts. The win did come at a price for Medvedev, who revealed on Monday morning that he only managed to managed to get two hours of sleep.

“I didn’t sleep so much. There were a lot of things going on. I did reply to most of my messages, all of them on WhatsApp and most of them on other social media [platforms], which takes some time after a big win like this” said Medvedev. “I even managed to play a little bit of Formula 1 here in the hotel. It was a busy night. I celebrated with my coach after the match [and] did all the media things. I got a good two hours of sleep.”

With so many messages from family, friends and fans across the world. Medvedev spent a large portion of his time on Sunday night replying to the people closest to him. During his time at The O2, he was accompanied only by his coach, Gilles Cervara.

“[I replied to] my wife [and] my family first, my closest friends and my team. I just tried to give them a head's up, something like a photo with the cup or something like this,” said Medvedev. “Then I took it step-by-step and just went up and down to say thank you to everybody for the nice messages they sent me yesterday.”

With just his coach by his side in London, Medvedev took a moment to reflect on his strong bond with Cervara. The Frenchman was voted by his peers as 2019 Coach Of The Year in the ATP Awards. Medvedev entered the Rolex Paris Masters earlier this month with just three wins from his past eight matches, seeking his first final appearance in 13 months, but through the good times and the bad times, Medvedev and Cervara continued to work towards their common goal: making Medvedev a better player each day.

“We are trying to improve all the time,” said Medvedev. “Like any relationship between coach and player, we can have our tough moments [and] our good moments. Sometimes I will not be playing good, I will not be happy with myself, he will not be happy with me or himself sometimes. Maybe he will think he is doing something wrong, I will think that I am doing something wrong. It is completely normal. It is a part of our sport. That is why people love sport. That is why we compete. We are trying to work every day to make me a better tennis player. Sometimes it works, sometimes it doesn’t.”

During the ATP Tour suspension due to COVID-19, Medvedev and his wife spent two months sharing a house with Cervara, his wife and his dog so he could continue to practise on a private tennis court. So while sharing his life on the ATP Tour with just his coach in a bubble environment has been an adjustment, it has not been an entirely unfamiliar experience. In fact, the reduced size of his team has helped him to concentrate on his game.

“The more people [that are] around me, the more I can get disturbed,” said Medvedev. “My team knows it and my team respects it because they want me to play as good as I can. We try to do the best about this. Here we could see big teams for everybody. I was just with my coach. In the bubble, we try to stay together, we try to get some good laughs, try to practise good and finally we clinched the tournament together.”

One of the defining features of Medvedev’s game in London was his mental strength. The Russian was one game from defeat as Rafael Nadal served to eliminate the Moscow-native in the semi-finals and Medvedev trailed Thiem by a set in the championship match.

“Inside of me, there is a winner that maybe sometimes is a bit childish, but wants to win every match he plays," said Medvedev. "That is why when I am not playing good, I can be angry [with] myself for this, because that is why I lose matches. That is also part of my success, why I am where I am, but I am working hard because I know that the more calm you are, the most focussed you are on the goal, the better it is for [my] tennis.”

Medvedev has certainly mastered the art of keeping calm after converting match points. The 24-year-old made the decision last year to adopt a unique signature celebration: the non-celebration. While some fans may not like the Russian’s lack of emotion in milestone moments, Medvedev took the time to explain the thought process behind his decision.

“Last year I just decided that it is going to be my trademark,” said Medvedev. “A lot of people like it, some [do] not, but that is how I feel… When there are huge crowds when you win a big title or big matches against big opponents and you don’t celebrate, you actually have the opportunity to look around you and feel all the energy that is going around. All of this energy is for you. If you win a match, all of the applause goes to you. As an artist, as a tennis player, you can feel it all if you think about it.”

If Medvedev wants to rise further in the FedEx ATP Rankings in 2021, he will need to find a way to sustain his current momentum across an entire season and find a way to win on days when he is not at his best level. It is a skill that Djokovic, Nadal and Roger Federer have mastered throughout their careers.

“After my victory here against Novak, I felt that he didn’t play his best tennis against me. But the thing is that even when he doesn’t play his best tennis, to beat him is so tough. I was happy about the win and that is why [the Big Three] are the best,” said Medvedev. “You can see some Grand Slam matches, even when they won the tournament, where they were not at their best but they were capable of clinching it in four sets… and then throughout the tournament they play better and better. They are the three best tennis players in the history of our sport.”

With seven Top 10 wins in his past 10 victories, there is no doubt that Medvedev can beat anyone on his day. The challenge will be making those days more frequent. With the support of his coach and the off-season in full swing, Medvedev will be fully focussed on making that goal a reality in 2021.