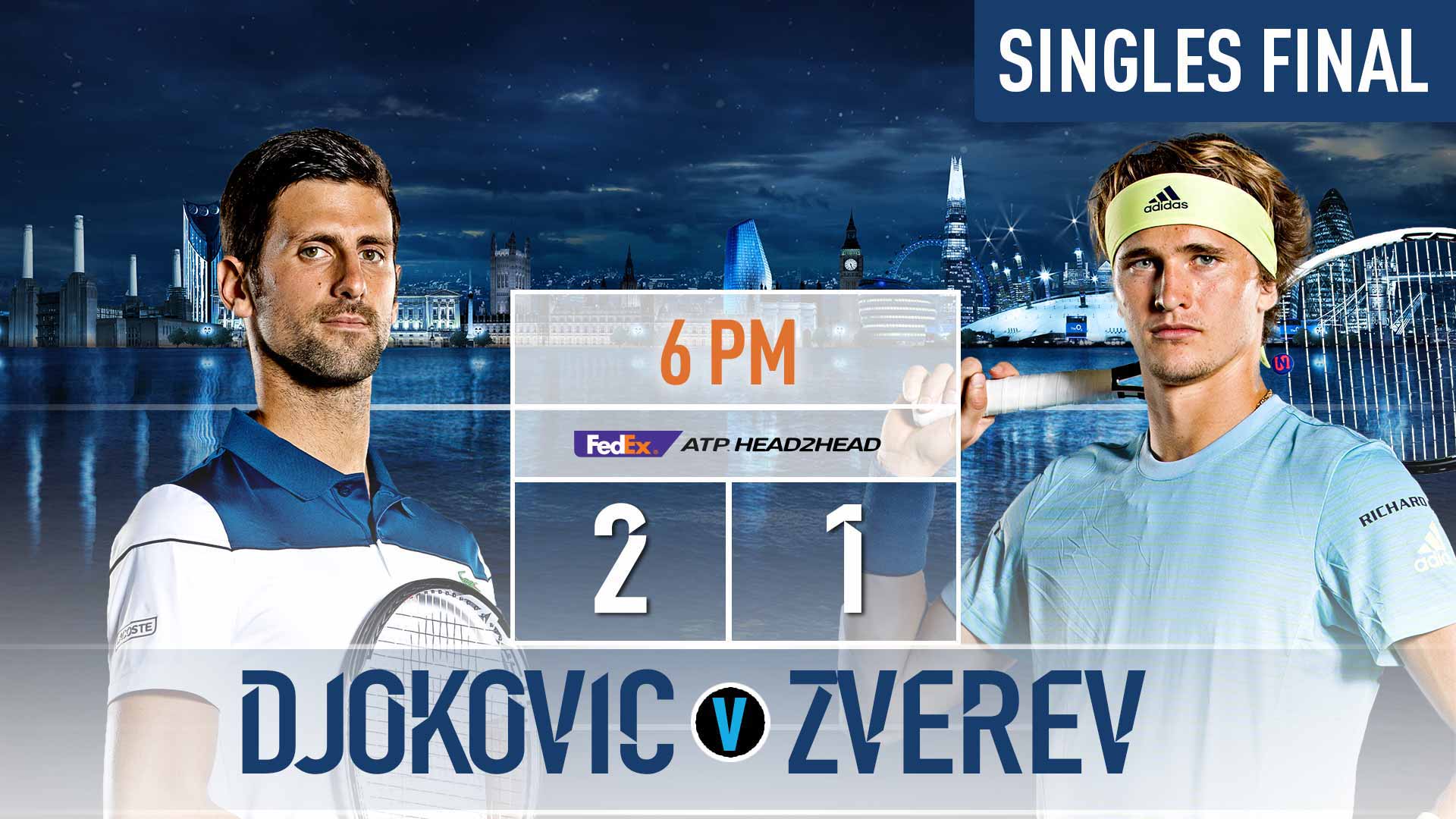 When Roger Federer exited The O2 in 2011, he took with him a record sixth trophy at the Nitto ATP Finals. It was an unprecedented achievement that was as astonishing as it was improbable. Qualifying for the season finale on six occasions is an impressive feat, but to win the title that many times is simply astounding.

Few believed that anyone would challenge Federer's mark in the near future. But only seven years later, Novak Djokovic has arrived on the doorstep of joining the exclusive club. The World No. 1 is one win from hoisting a record-tying sixth piece of silverware on the ATP World Tour's grandest stage.

Standing in Djokovic's way of the historic achievement is Alexander Zverev, whom he defeated 6-4, 6-1 in Wednesday's group stage. The Serbian was on the attack from the first ball, winning a staggering 73 per cent of first serve points and denying both break opportunities earned by the German, en route to a comprehensive 77-minute win.

That match is not an anomaly. Djokovic has served notice to the rest of the Top 10 that he once again stands alone atop the tennis universe. And it's not even close. The Nitto ATP Finals is the best of the best and the Serbian is proving that he is just that much better.

"Novak right now is the best player in the world," said Zverev. "It's very tough to beat him. He's barely lost a match in the last six months. He's playing amazing tennis. You have to play your best game to even have a chance. I hope I'll be able to do that tomorrow."

Not only does Djokovic enter the final having not dropped serve all week, but he is bidding to become the first player to lift the Nitto ATP Finals trophy without being broken since ATP match facts began in 1991. Just six weeks ago, he achieved the feat for the first time in his career, when he streaked to the title at the Rolex Shanghai Masters.

Djokovic isn't just dominating his Top 10 brethren at The O2, he's blitzing the competition without pause. He entered the week riding a 10-match win streak against Top 10 opponents and that number has swelled to a whopping 14 in a row.

In addition, Djokovic is vying to become the first player to win the title at the season finale without dropping a set since Ivan Lendl in 1986. And he is bidding to become the oldest winner in tournament history, at 31 years, five months.

While there is plenty at stake for the surging World No. 1 in Sunday's championship clash, Zverev is hoping to crash the party with a breakthrough performance. The German is making the most of his second appearance at The O2. Despite falling in round-robin action to Djokovic, he is playing some of the best tennis of his career to reach the final.

"I'm expecting quite a different matchup for us tomorrow than what it was in the group stage," Djokovic said of Zverev. "That win can definitely serve as kind of maybe a mental advantage a little bit coming into tomorrow's match. But Sascha, even though he's a leader of new generation, still kind of considered a young player, he's an established player. He's shown some great skill on the court the last couple years. He's shown why he deserves to be in the mix of the top players in the world."

On Saturday, Zverev exhibited the poise and maturity of a champion in dismissing Federer in a tight straight-set semi-final affair. He is standing tall on the baseline and blasting through the court with fearless aggression, but arguably the most impressive piece of the German's game has been his delivery. Zverev won more than 75 per cent of first serve points in defeating Marin Cilic, John Isner and Federer.

Behind that indomitable serve, he has surged into the biggest final of his young career. But Zverev will need it to show up on Sunday against his opponent's ruthless returning. Denting the elastic wall that is Djokovic is no easy task to, but if the German is to be effective, another strong serving performance is critical.

When Zverev steps onto the court at The O2, he'll be eyeing a slice of history of his own, as the youngest champion at the Nitto ATP Finals since Djokovic himself in 2008 (in Shanghai). At 21 years and six months, he is just one month older than the Serbian was when he reigned for the first time a decade ago.

Zverev, who is the first German finalist since Boris Becker in 1996, is appearing in his sixth title match of the year. Champion at the ATP World Tour 250 event in Munich, 500 event in Washington and Masters 1000 stop in Madrid, he also finished runner-up in Miami and Rome.

With so much on the line, fireworks are sure to fly under the bright lights of The O2. It will be the fourth FedEx ATP Head2Head encounter between Djokovic and Zverev, with both of the Serbian's victories coming in the past two months. In addition to his group stage win earlier this week, he dropped just three games in prevailing at the Rolex Shanghai Masters in October. Meanwhile, Zverev's lone victory came last year in the final of the Internazionali BNL d'Italia in Rome. He will look to draw upon that experience when he squares off against the hottest player on the planet on Sunday.

American Duo To Face French Foes In Doubles Final
In the doubles final, fifth-seeded Americans Mike Bryan and Jack Sock will look to cap their week in London with a slice of revenge against Frenchmen Pierre-Hugues Herbert and Nicolas Mahut. Bryan and Sock, who are making their team debut at the Nitto ATP Finals, finished second to Herbert and Mahut in Group Knowles/Nestor following a 6-2, 6-2 round robin defeat on Friday.

Payback will be on the Americans' minds as they look to complete a stunning 2018 campaign as a tandem. Champions at Wimbledon and the US Open, they are bidding for a 20th match win of the year in Sunday's championship. Individually, Bryan is eyeing a fifth title at the season finale, having prevailed alongside brother Bob Bryan in 2003, 2004, 2009 and 2014.

It marks the third meeting in three weeks between the teams, having also clashed in the quarter-finals of the Rolex Paris Masters. The Americans won that battle in a Match Tie-break.

For Herbert and Mahut, their run to the final has already exceeded their best result at the Nitto ATP Finals. Following three consecutive group stage exits from 2015-17, they are enjoying a breakthrough campaign at The O2 as the eighth seeds. Also the champions at Roland Garros and in Rotterdam, they are bidding for a third title of the year.