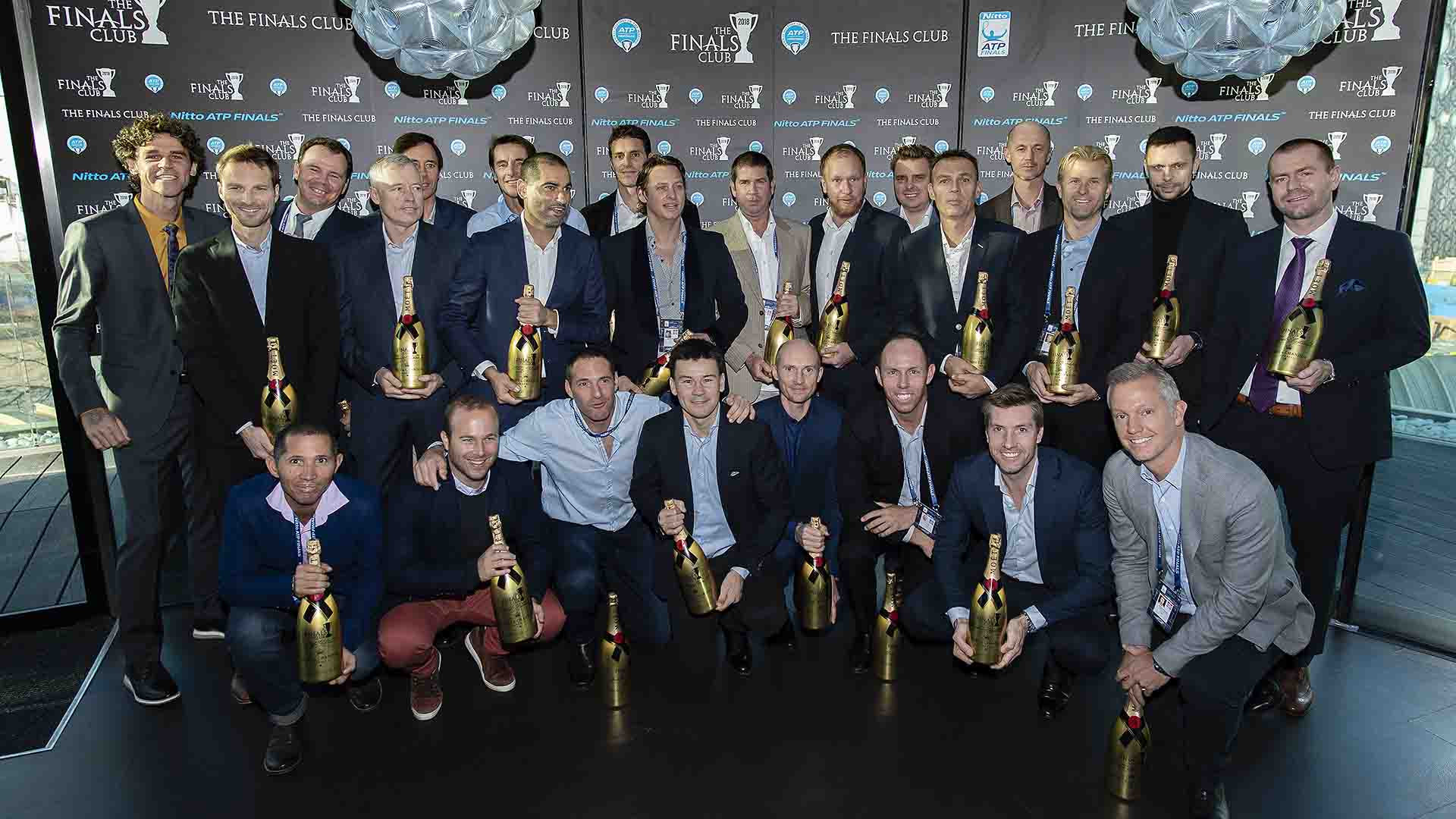 Prominent players from the 2000s are celebrated at the Finals Club on finals day at the Nitto ATP Finals on Sunday. © Peter Staples/ATP World Tour

Former players from the 2000s involved in the season-ending Nitto ATP Finals were welcomed to The O2, venue of the season finale in London, this week. Two former singles World No. 1s, Gustavo Kuerten, the 2000 champion, and Lleyton Hewitt, the 2001-02 titlist, plus 2005 winner David Nalbandian, and 2009 champion Nikolay Davydenko took part in this week’s celebrations.

More than 30 players, who featured in the year-end singles and doubles championships from the 2000s, travelled to the English capital as part of The Finals Club, an initiative established in 2015 that welcomes some of the game’s former greats from the past 48 years to return to the season-ending tournament, where they will be able to reconnect with the sport, their peers, as well as the world’s best players of today.

“The Finals Club is a fantastic idea to reconnect former players,” said Nalbandian, who was urged by his family to travel to London to join the celebrations. “My young children don’t know I was a tennis player, so it is great to have them here too. It’s a real reunion as there’s a lot of former rivals and friends, ATP staff members who I haven’t seen for years.”

Davydenko, who was joined in London with his wife, Irina, said, “I’m very happy to be here and to reconnect with former players that I used to compete against. It was a privilege to play at the season finale for five straight years, culminating in my 2009 triumph.”

Johansson, who took part in the 2002 season finale, admitted, “It’s an honour to be invited to play here as it’s really the first time when the former players have been able to sit down and talk openly about their careers, socialise away from the competition and find out what each other is up to away from the sport. It’s great to spend time here, and also watch the current pros – especially Roger [Federer], who continues to compete and inspire young children globally.”

The group took a boat ride from the London Eye to The O2, then enjoyed a Moët & Chandon toast and were welcomed by Chris Kermode, the ATP Executive Chairman and President. Having been presented with personalised Moët & Chandon bottles, the former players enjoyed a sumptuous lunch, prior to taking their seats courtside for the 2018 singles and doubles title matches at the Nitto ATP Finals.

The Finals Club this year has been highlighted by the renaming of Groups A and B for both the singles and doubles in honour of players who made an indelible mark on the tournament in the 2000s. In singles, Group A was named after Kuerten and Group B after Hewitt. The doubles groups were named Group Knowles/Nestor and Group Llodra/Santoro, after 2007 champions Mark Knowles and Daniel Nestor and Michael Llodra and Fabrice Santoro, who won the year-end championships in 2005.