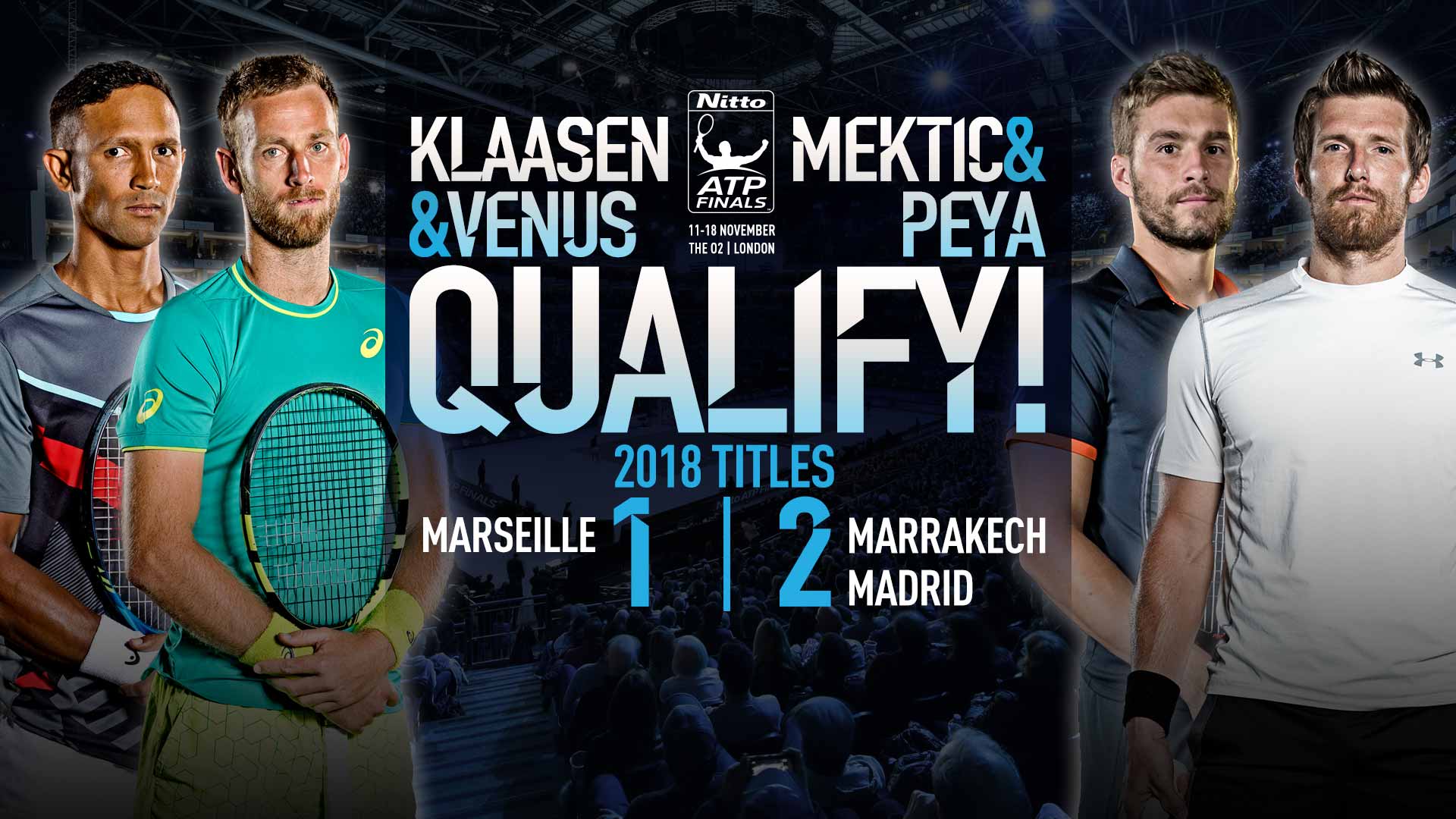 Raven Klaasen and Michael Venus, and Nikola Mektic and Alexander Peya, have become the final two teams to qualify for the 2018 Nitto ATP Finals, to be held at The O2 in London from 11-18 November. Per ATP rules, the doubles field will be determined on 5 November following the conclusion of the Rolex Paris Masters, the final tournament of the regular ATP World Tour season.

On 5 November, it will be determined what the eight teams will be as both Bob Bryan and Mike Bryan and also Mike Bryan and Jack Sock currently have sufficient points in the ATP Doubles Race To London to secure a place at the season finale. Bob Bryan has been sidelined due to a hip injury since May, but may be fit enough to return with his twin brother to the prestigious event.

Klaasen and Venus will make their team debuts at the Nitto ATP Finals in their first season as a pair. The South African/Kiwi tandem have won one title at the Open 13 Provence in Marseille (d. Daniell/Inglot) and also finished runner-up at four other tournaments. During the grass swing, they were runners-up at the Libema Open in ‘s-Hertogenbosch (l. to Inglot/Skugor), followed by Wimbledon (l. to M. Bryan/Sock). They continued their success on hard courts with a run to the final at the Rogers Cup, an ATP World Tour Masters 1000 tournament in Toronto (l. to Kontinen/Peers), and at the 500-level Rakuten Japan Open Tennis Championships 2018 in Tokyo (l. to McLachlan/Struff).

Klaasen will be making his third appearance at the Nitto ATP Finals. The 36-year-old South African reached the championship match with American Rajeev Ram on his tournament debut in 2016 (l. to Kontinen/Peers), and stepped in to play a round-robin match as alternates last year. Venus, 31, qualifies for a second straight year. The New Zealand native won all three round-robin matches alongside Ryan Harrison in 2017.

Mektic and Peya has compiled a 2-3 record in ATP World Tour doubles finals in 2018, highlighted by lifting a Masters 1000 title at the Mutua Madrid Open (d. Bryans) in May and also at the 250-level Grand Prix Hassan II in Marrakech (d. Paire/Roger-Vasselin) in April. The Croatian/Austrian team also finished runner-up at two tournaments in February, the Sofia Open (l. to Haase/Middelkoop) and at the Rio Open presented by Claro (l. to Marrero/Verdasco), plus the BMW Open by FWU at Munich (l. to Dodig/Ram) in May.

Peya, 38, qualified for the Nitto ATP Finals with Bruno Soares in 2013 – reaching the semi-finals – and in 2014. The 29-year-old Mektic will be making his debut at next month’s tournament.