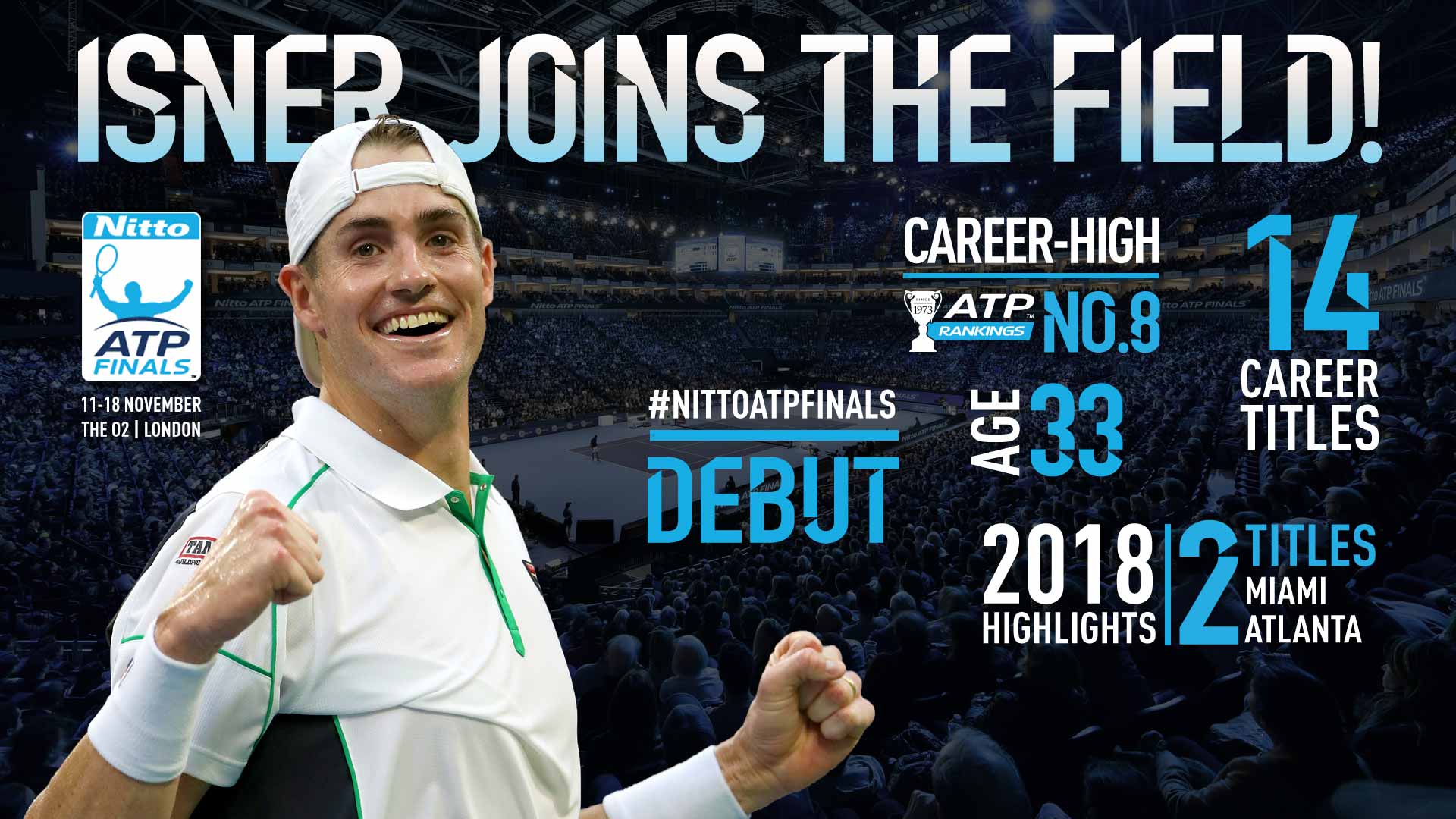 John Isner will compete at the 2018 Nitto ATP Finals, to be held at The O2 in London from 11-18 November, following the withdrawal of Rafael Nadal due to injury. Isner will join Novak Djokovic, Roger Federer, Alexander Zverev, Kevin Anderson, Marin Cilic, Dominic Thiem and Kei Nishikori at the elite eight-player event.

Nadal, who has not played competitively since retiring with a right knee injury versus Juan Martin del Potro on 8 September in the US Open semi-finals, is unable to recover full fitness ahead of the season finale in London. Last week, the Spaniard attempted to play at the Rolex Paris Masters, but was forced to withdraw prior to his first match due to an abdominal injury.

“I am writing these words to announce the end of my season,” announced Nadal in a statement. “It has been a complicated year. I played at a very high level when I was able to compete, but at the same time it was very bad as far as injuries are concerned. I have done everything possible to reach the end of the season in good condition, both in Paris and London, and I really wanted to play.

“But unfortunately, I had an abdominal problem in Paris last week and, in addition, I have a [problem] with my right ankle joint that [required] an operation [today]. It is true that we have known about it for a while, and from time to time it bothered me. However, since the problem with my abdominal muscle also prevents me from playing in London, we are taking advantage of the moment to remove the free body and avoid future problems.

“With this, I hope to be in full health for the next season. Thank you all for your support.”

The 33-year-old Isner becomes the third oldest first-time qualifier in tournament history (since 1970), behind Australia’s Ken Rosewall (36, at the inaugural 1970 event in Tokyo) and Andres Gimeno (35), who competed at the 1972 event in Barcelona.

Isner, who has put together the best season of his career in 2018 and achieved a career-high No. 8 in the ATP Rankings on 16 July, defeated Cilic, Del Potro and Zverev for his first Masters 1000 title at the Miami Open presented by Itaú on 1 April. As the World No. 17, he was the lowest-ranked Miami champion since No. 18 Jim Courier in 1991 and at the age of 32, was the oldest first-time Masters 1000 titlist since the tournament series began in 1990. The American clinched his fifth trophy in his eighth BB&T Atlanta Open final (d. Harrison) in July shortly after advancing to his first Grand Slam semi-final at Wimbledon, where he lost 26-24 in the fifth set against Anderson, after six hours and 36 minutes — the second longest-match in major championship history. By reaching his second US Open quarter-final (l. to Del Potro), Isner also became the first American to reach two straight Grand Slam quarter-finals since Andy Roddick at 2008 US Open and 2009 Australian Open. Isner is guaranteed his first year-end Top 10 finish — his previous year-end high being No. 11 in 2015.

Karen Khachanov, who picked up his first ATP World Tour Masters 1000 title in Paris on Sunday (d. Djokovic), and Borna Coric will serve as first and second alternates respectively at the 2018 season finale.