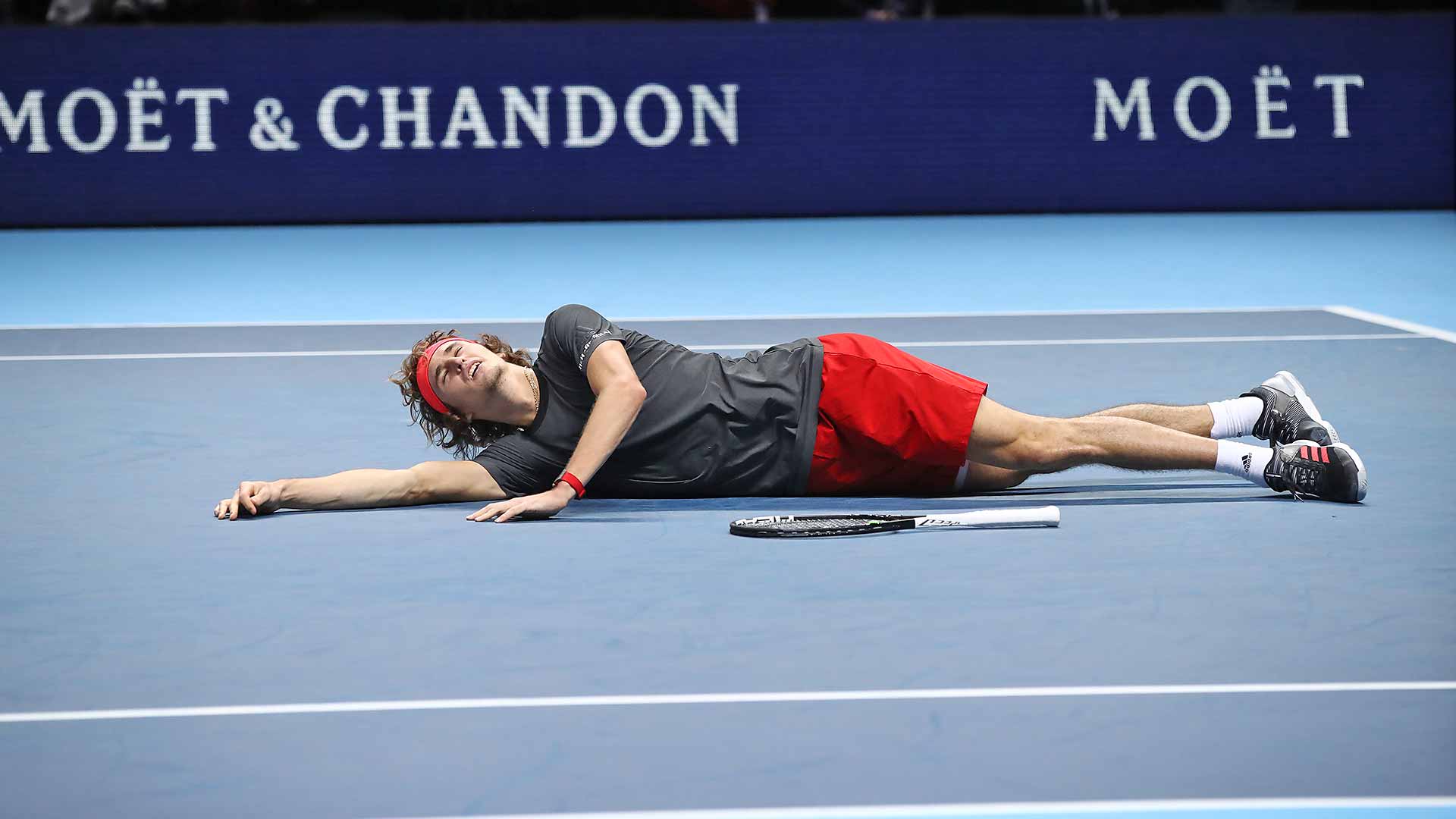 Alexander Zverev became the youngest champion at the Nitto ATP Finals in a decade on Sunday, stunning World No. 1 Novak Djokovic 6-4, 6-3 to lift the biggest title of his career.

The 21-year-old, the youngest player to triumph at the season finale since Djokovic in 2008, was already the first German to reach the championship match at the season finale since 1996, when Boris Becker did it. And now Zverev is the first player from his country to lift the trophy since Becker did so in 1995, dashing Djokovic’s hopes of a perfect ending to a fairytale season in which he returned from a right elbow injury back to No. 1 in the ATP Rankings.

"This is the biggest title of my career so far. This trophy means a lot, everything, to all the players. I mean, you only have so many chances of winning it. You play against the best players only," Zverev said. "How I played today, how I won it, for me it's just amazing." 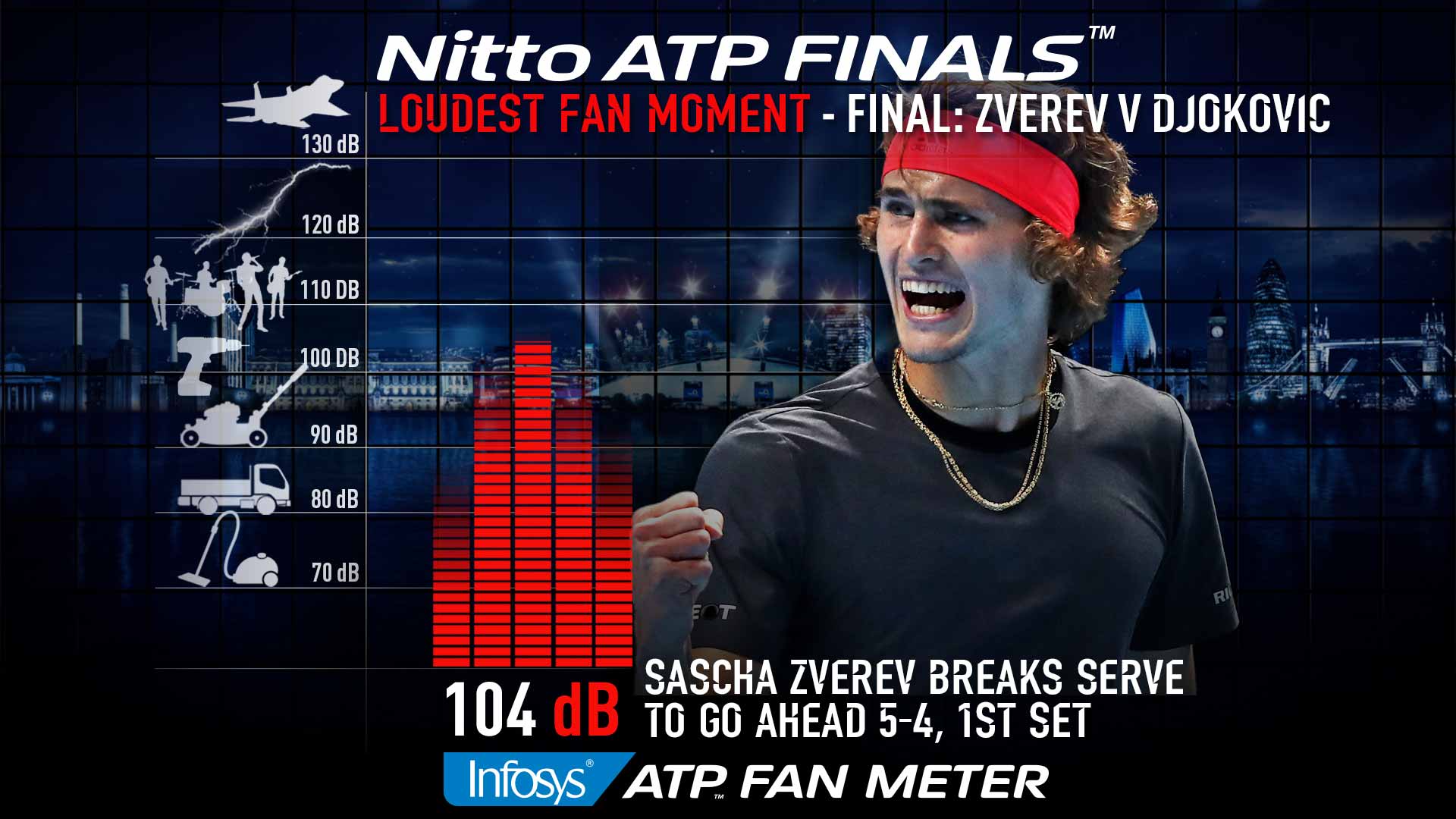 One year ago, Zverev made his debut at The O2, falling short of reaching the semi-finals. But the 10-time ATP World Tour champion showed his growth, beating six-time champion Roger Federer in straight sets on Saturday and now Djokovic for the victory. It's the first time a player has beaten both Djokovic and Federer at the same Nitto ATP Finals. Zverev's the first player to beat the Top 2 seeds in the semi-finals and final of the event since Andre Agassi in 1990.

"It's quite astonishing, winning this title, beating two such players back-to-back, Roger and Novak, in semi-finals and final," Zverev said. "It means so much. I'm incredibly happy and incredibly proud of this moment right now."

Entering the match, all signs were pointing to Djokovic tying Federer’s record of six triumphs at the season finale. The Serbian had won 35 of his previous 37 matches entering the final, and all 36 of his service games this week at The O2. Four days ago, he had beaten Zverev with the loss of just five games in round-robin play, and he walked on Centre Court having won 14 consecutive matches against opponents inside the Top 10 of the ATP Rankings, dropping just six sets in those clashes.

But from the first point of the match, Zverev showed no fear, standing on the baseline and trading blows with Djokovic, who for the first time all tournament appeared to be scrambling, and not the in-control defensive wall that had diffused attacks from the very best players in the world.

"I wasn't trying to overthink it. I just tried to go out there and enjoy the match as much as I can, enjoy the atmosphere, enjoy the moment. That's what I did," Zverev said. "My serve has been working well the whole week. I had a lot of confidence in it. It all worked out well."

Zverev was especially solid with his two-handed backhand, using good depth to keep Djokovic on the back foot. And perhaps surprisingly, it was the German left standing in many of the longer rallies, refusing to overplay and succumb to the top seed’s defensive pressure as other players had at The O2 this week.

The German earned the only two break points Djokovic faced in his first four matches at the event in their round-robin match, but could not convert either of them. In the final, however, Zverev broke serve four times in 10 return games.

"I'd like to congratulate Novak on a great week and the second half of the season. You've barely lost a match and I'm actually very thankful you lost to me today," Zverev said. "We've played twice this week. Everyone knows how good of a tennis player you are, but I want to mention how good of a person you are. We've had a lot of good talks on life. I appreciate you letting me win the title today."

"I'd like to thank my Dad, who has coached me all my life. He won't stop crying until next year, probably. Thanks Ivan [Lendl] for joining the team. I think it's working out for now!"

While Djokovic fell short of matching Federer’s record, he has still enjoyed a tremendous rise in the second half of 2018. In June, the Serbian fell as low as No. 22 in the ATP Rankings, his lowest point in more than 11 years. But starting with Wimbledon, Djokovic won four tour-level titles to claw his way back to the top spot of the ATP Rankings.

Did You Know?
Zverev finishes the season with an ATP World Tour-leading 58 tour-level wins, surpassing his previous career-high of 55.