Djokovic On Chasing Year-End No. 1 In London: 'It Is Up For Grabs' 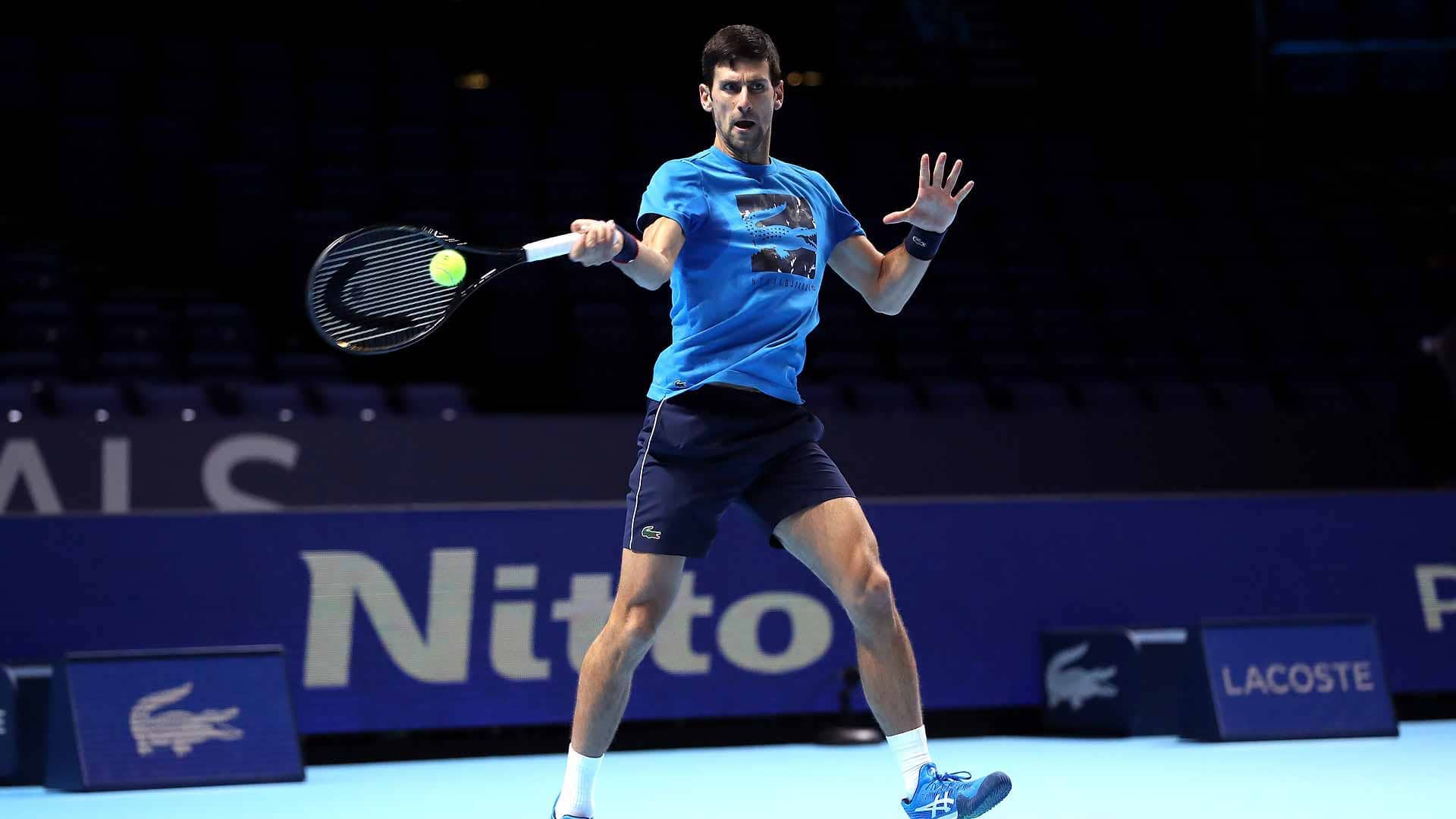 Entering the Rolex Paris Masters, Novak Djokovic trailed Rafael Nadal by 1,280 points in the ATP Race To London, with the possibility of his year-end No. 1 dream slipping away on the indoor courts of Bercy. But instead, the Serbian claimed his 34th ATP Masters 1000 title, and he arrives at the Nitto ATP Finals with a chance to snatch year-end No. 1 from Rafael Nadal in London.

“It is up for grabs for both of us. This tournament is going to decide [it]. He’s in a better position, but after winning Paris-Bercy I put myself in a pretty good position,” Djokovic said. “Obviously it doesn’t depend only on me, it depends on how he does in the tournament. But I’ll try to focus on my matches and obviously right from the beginning, out of the blocks, you have to start with a real intensity and quality of tennis because it’s the elite eight players of the world. There’s no smoothing your way into the tournament, you have to be very sharp from the start.”

Djokovic will have to reach the final with at least two round-robin wins to give himself a chance at matching Pete Sampras’ record of six year-end No. 1 finishes. Nadal, who owns a 640-point lead, controls his own destiny as he tries to match Djokovic, Roger Federer and Jimmy Connors, who are tied in second on the all-time list by finishing year-end No. 1 on five occasions.

The Serbian will give himself the best chance by winning all three of his Group Bjorn Borg matches and triumphing at the Nitto ATP Finals for the sixth time, which would tie Federer’s record.

“It’s a great motivation of course. I love this sport. I care about of course doing as best as I can, as anybody else, and trying to make the history of tennis is a huge honour and privilege. So I find myself in the very privileged position to this year fight for a sixth title at the [Nitto ATP] Finals, which would equal Roger,” Djokovic said. “But we all have different paths, we all have different journeys and I’m trying to embrace my journey and get the best out of it.”

Djokovic has enjoyed more success at The O2 than anyone, winning four of his five season finale trophies since the tournament moved to London in 2009. The only other player who has triumphed here more than once is Federer, who has done so twice.

“I think it’s a fantastic stage to host the [Nitto ATP] Finals. The attendance is great from day one, the tournament has had so much success in the past decade that it has been here,” Djokovic said. “So I look forward to it.”

The 32-year-old says that although this event is important in itself in his hopes of matching Sampras’ mark, it has been an entire season of work — not just by him, but by his coaching staff and family — to help propel him into this situation, one that he cherishes.

“I think it’s probably in my personal opinion one of the two biggest achievements that you can have as a professional competitive tennis player, winning a Grand Slam and being No. 1 of the world at the end of the season. At this stage of my career obviously in terms of goals and achievements, obviously that’s right at the top,” Djokovic said. “But in order for me to be in the position to battle for that year-end No.1, I understand that I have to be healthy and schedule well and Roger was talking about the family; I don’t know how he does it with four children, I struggle with two. It’s a hell of an effort.

“But we all love tennis and dedicate ourselves, our lives and of course to this sport. But at the same time, it has to be balanced with off-court stuff, and children and family and we have to have the support of close ones in order to actually have a chance and have a go for year-end No. 1.”

Someone who has helped Djokovic this year is former World No. 2 Goran Ivanisevic, who joined the Serbian’s team at Wimbledon this year. Djokovic first met ivanisevic when he was 12, just before the Croat won the 2001 Wimbledon title, and now they are working together towards common goals.

“He was in my shoes, he knows what it feels like to compete at the highest level, to win a Slam. He’s in a very good relationship with Marian, I think that’s important that there is a synergy and understanding,” Djokovic said. “They bring a lot of wisdom, but simplicity through information that is very valuable for me to perform my best on the court.”

“It’s a great message for the sport. It was inevitable that it was going to happen that we were going to have a really successful next generation coming in,” Djokovic said. “I think Roger, Rafa and I are still glad that we are kind of in the mix. How long that’s going to go for? Of course it’s not going to go forever.”

But Djokovic is not ready for the Big Three to relinquish the throne yet. And he hopes that leads to a record-tying sixth Nitto ATP Finals title and sixth year-end No. 1 finish.

“We’re pushed by new generations that we have to improve on the tennis court. So I do have frequent conversations with my coaches about my game in general, what are the things that make me feel good, what are the things that can be improved, and that changes depending on the year, depending on the surface, and it’s exciting,” Djokovic said. “There is always something to work on.”