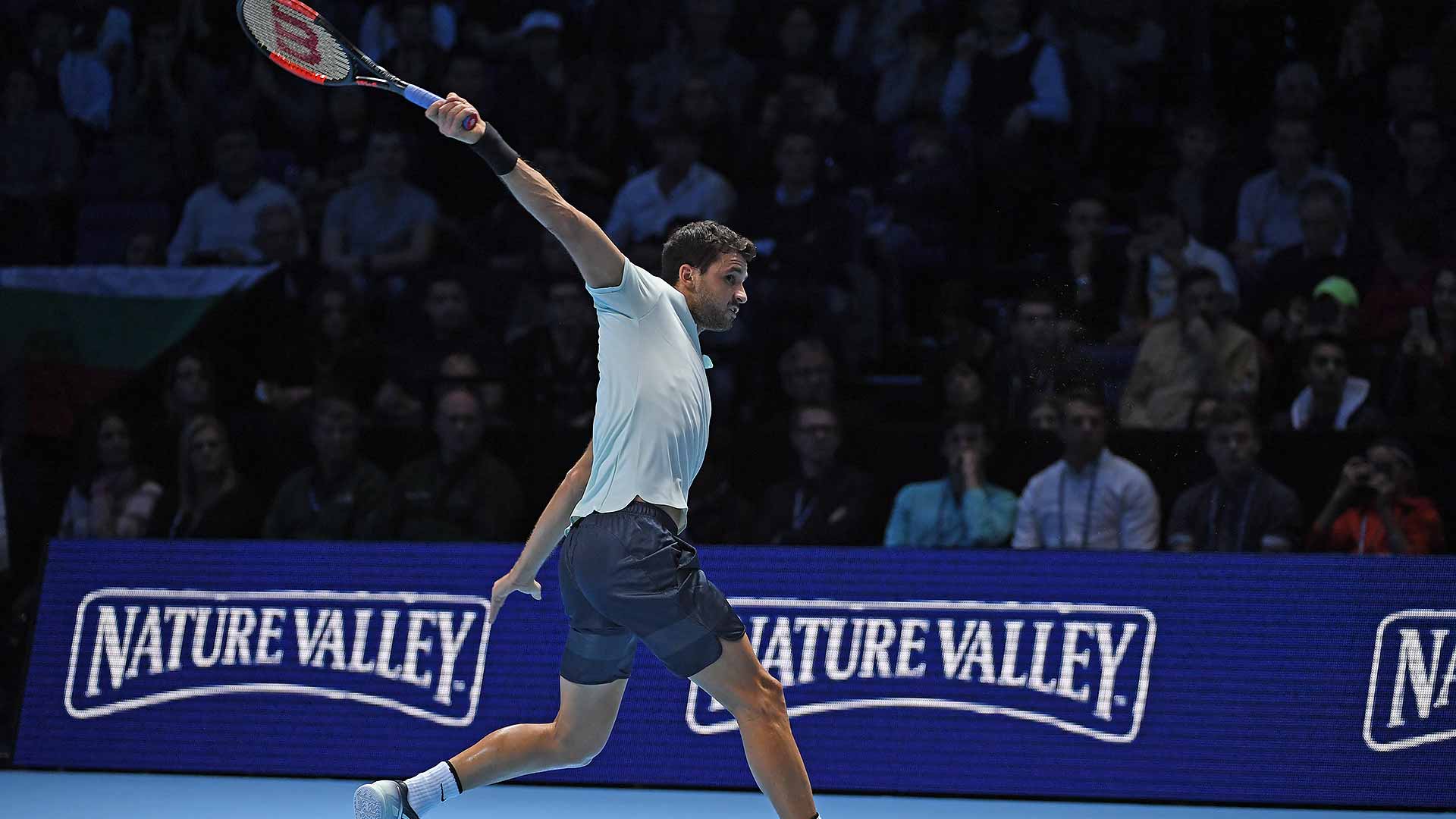 Grigor Dimitrov might be playing the best tennis of his career. The Bulgarian remained unbeaten at the Nitto ATP Finals on Saturday night, converting his fourth match point to advance past American Jack Sock 4-6, 6-0, 6-3 at The O2.

Dimitrov improved to 4-0 in London this week to reach the Nitto ATP Finals title match, his fifth final of the season and the biggest of his career.

Waiting for him will be seventh seed David Goffin, who upset six-time former champion Roger Federer 2-6, 6-3, 6-4 earlier on Saturday. Dimitrov leads their FedEx ATP Head2Head series 4-1, including a 6-0, 6-2 rout on Wednesday during Group Pete Sampras play.

“I think his confidence is going to be up there. But I'm not going to focus in on his confidence or his game right now. I'm just focusing on myself, the recovery that I'm going to do today,” Dimitrov said. “Of course, it's not going to be the same after I played against him... I think also it's a different stage for both of us.”

Dimitrov became the first debutant to reach the final since David Ferrer of Spain in 2007 (l. to Federer). Dimitrov will try to match another Spaniard by winning the season finale. Alex Corretja in 1998 was the last debutant to win the Nitto ATP Finals crown (d. Moya).

Another title would give Dimitrov a career-best four crowns for the season. He's already hoisted trophies at the Brisbane International presented by Suncorp, at the Garanti Koza Sofia Open and at the Western & Southern Open in Cincinnati, his first ATP World Tour Masters 1000 tournament and the biggest title of his career.

Even if he loses on Sunday, though, he's guaranteed another career-high in the Emirates ATP Rankings. Dimitrov will have 4,650 rankings points on Monday, when the new Emirates ATP Rankings are released, so he will pass No. 3 Alexander Zverev of Germany, who has 4,610 points.

“The goal was to finish the year Top 10. Now I finished 3,” Dimitrov said. “It's wonderful, a wonderful reward. This is what I've been working for... It's not only good for me, I think for the whole team. I think that gives us a very good platform to start in the off-season, to have a good start of next year.”

The sixth-seeded Dimitrov first had to overcome some past demons to reach his fifth final of the season. Dimitrov trailed Sock in their FedEx ATP Head2Head rivalry 1-3. But in two of those losses, the Bulgarian held match points, including earlier this year at the BNP Paribas Open, where Dimitrov had four match points but couldn't break through.

He had to be pushing away those thoughts as he stepped forward to serve for the match at 5-3. Dimitrov had bounced back from a strong first set for Sock that had seen the American controlling play with his forehand. The Bulgarian had won 11 of the past 14 games, and four more points would put him into the title match.

But Sock hung around, as he had done by winning the Rolex Paris Masters to qualify for his first season finale. The American saved four match points – and even had two break points – before Dimitrov clinched the win when Sock netted a forehand.

“Sometimes not only you have to fight yourself mentally, but you need to fight the demons from previous matches or your opponent,” Dimitrov said. “But I was very happy the way I handled the pressure. Even though I was down a break point, even if I had to play an extra game or games, I had to accept it. I think, regardless, you learn from those moments. I certainly learned from that experience.”

Sock, who reached the semi-finals on his debut, will finish the season at a career-high of No. 8 in the Emirates ATP Rankings.

“I thought he really stepped up his level in the second and third. Came up with some pretty crazy shots in the third set at some inopportune [times] for myself,” Sock said. “There's a reason he's been playing this consistently all year. That's the reason he's in the final.”