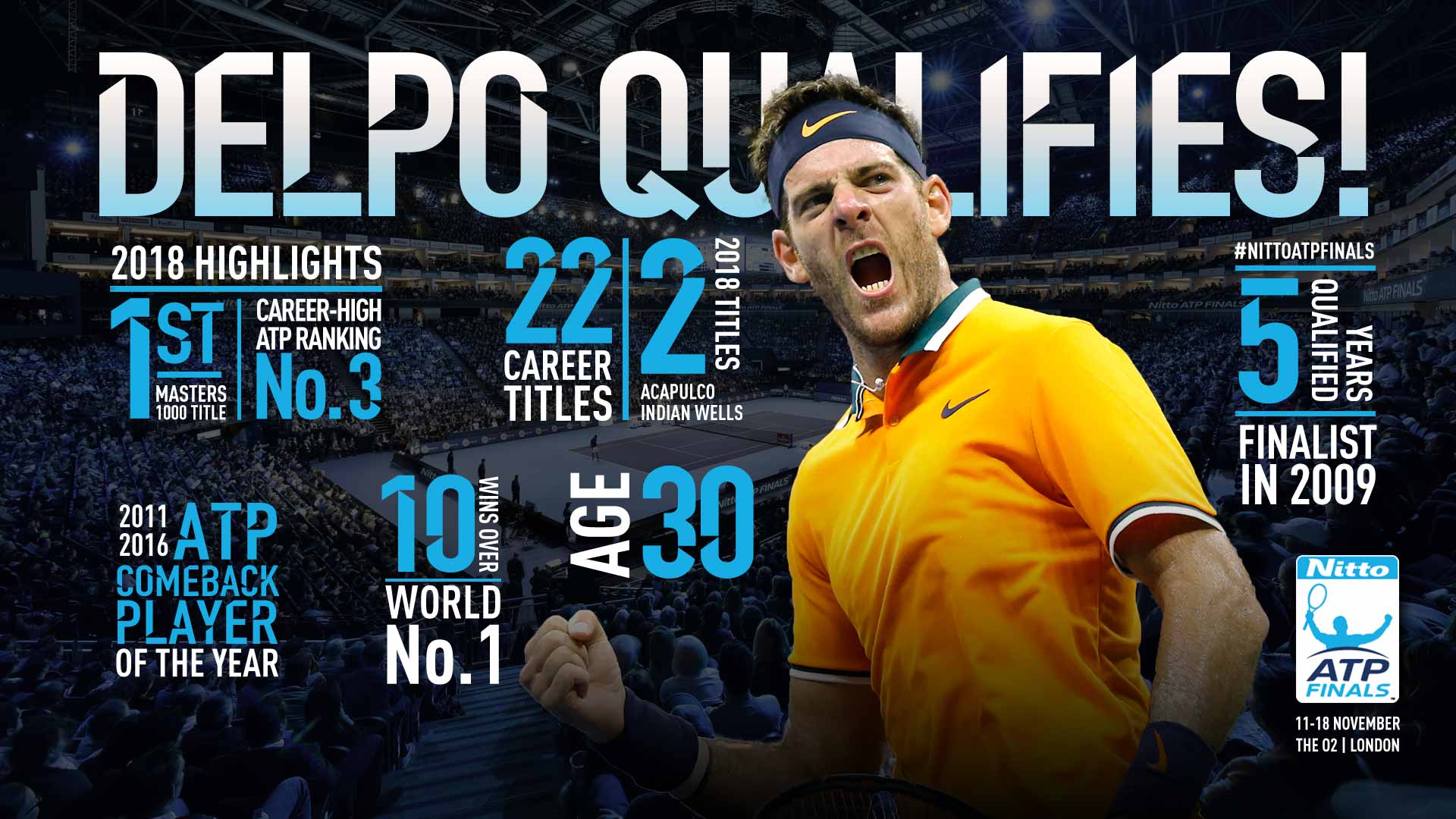 Juan Martin del Potro becomes the fourth singles player to qualify for the 2018 Nitto ATP Finals, clinching his place in the elite field for the first time since 2013 — and the fifth year overall — with victory over Karen Khachanov on Wednesday to reach the China Open quarter-finals. The Argentinean will join World No. 1 Rafael Nadal of Spain, Serbia’s five-time former champion Djokovic and six-time former titlist Roger Federer of Switzerland at The O2 in London from 11-18 November.

The 30-year-old Del Potro first qualified for the Nitto ATP Finals in 2008, when the event was held in Shanghai, finished runner-up to Nikolay Davydenko in the championship match the following year in the first edition at The O2, and later clinched his spot again in 2012-13.

Almost nine years after he first broke into the Top 10 of the ATP Rankings, the Tandil native returned to the elite on 15 January 2018. On a run of 15 straight matches, Del Potro beat three Top 10 players en route the Abierto Mexicano Telcel presentado por HSBC crown in Acapulco (d. Anderson) and recorded the 400th match win of his career in the BNP Paribas Open semi-finals (d. Raonic) en route to his first ATP World Tour Masters 1000 trophy in Indian Wells (d. Federer). He also finished runner-up at the ABS Classic in Auckland (l. to Bautista Agut) and the Abierto de Tenis Mifel presentado por Cinemex in Los Cabos (l. to Fognini), prior to moving up to a career-high No. 3 on 13 August.

This year, Del Potro advanced to his second Grand Slam championship final in New York City, nine years on from lifting the 2009 US Open crown (d. Federer). He also reached the Roland Garros semi-finals for a second time (also 2009) and the Wimbledon quarter-finals (l. to Nadal both times).

With four singles spots left up for grabs, Germany’s Alexander Zverev is next in line to qualify for the 2018 Nitto ATP Finals for the second consecutive season, followed by Marin Cilic of Croatia, Dominic Thiem of Austria and South Africa’s Kevin Anderson. Oliver Marach and Mate Pavic, and Juan Sebastian Cabal and Robert Farah are the only doubles team to have clinched a place at London in November.

The Nitto ATP Finals welcomes more than 250,000 fans to The O2 arena annually, as well as generating global viewership figures reaching an average of 95 million viewers each year, as the ATP’s best eight singles players and doubles teams compete over eight days at the biggest indoor tennis tournament in the world.