See More Player News
Berrettini On Italy's Super Sunday: 'I Want To Get The Trophy Now' 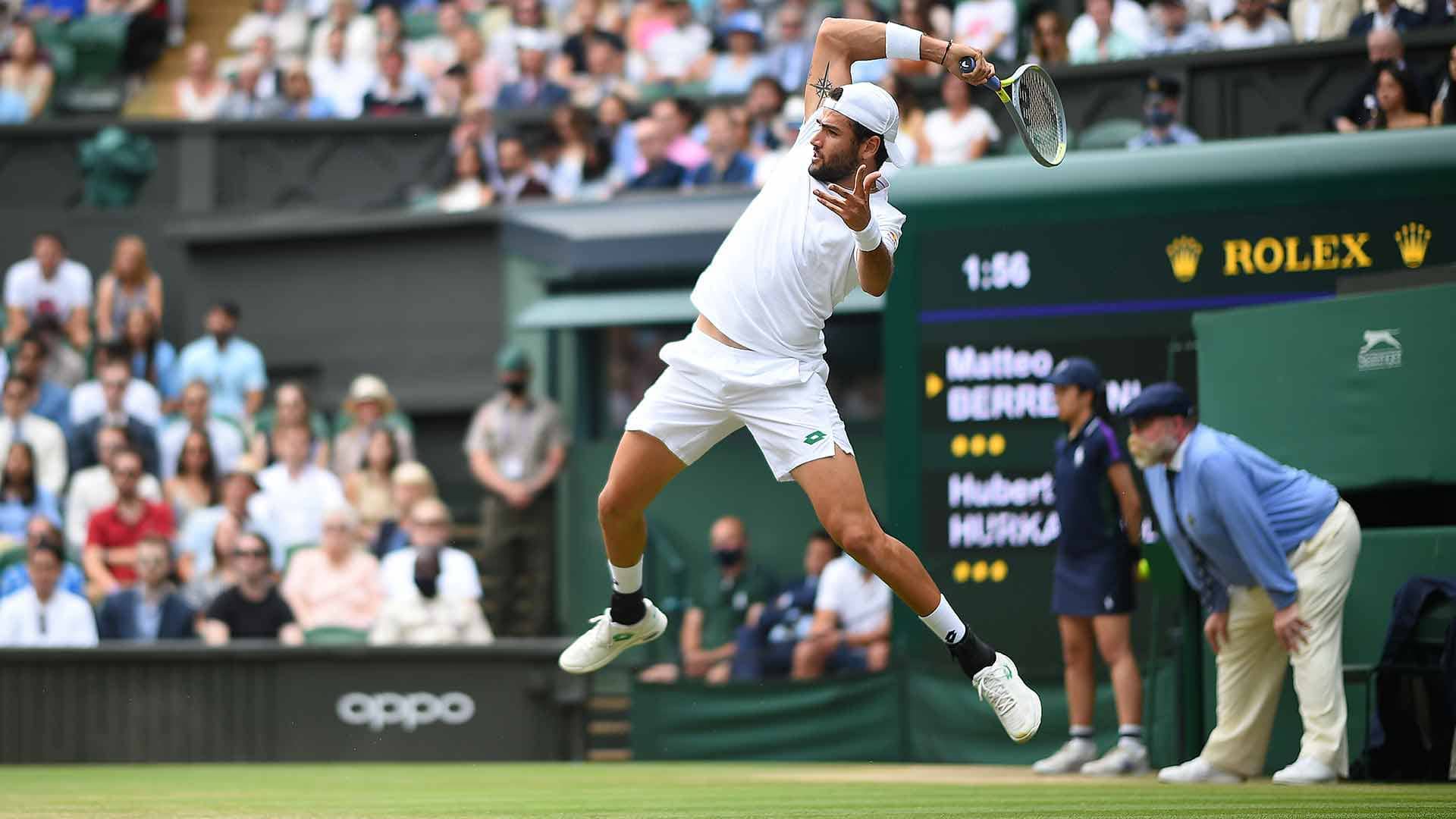 Matteo Berrettini beat Hubert Hurkacz on Friday for a place in the Wimbledon final. © Corinne Dubreuil

When Matteo Berrettini held aloft the solid silver cinch Championships trophy three weeks ago, BBC television presenter Sue Barker pointed out that he was the first debutant at The Queen’s Club to lift the trophy since Boris Becker in 1985. The Italian could only smile.

“Maybe he stepped into Wimbledon and he thought about making the final,” said Berrettini on Friday. “I didn't think like that. I knew I could do it, but I didn't think I [was] going to do it, because that is how I am. I took every step really careful and slowly. I guess it was the right thing to do.”

Today, Berrettini is riding an 11-match winning streak on grass and is one victory away from following in the footsteps of the 17-year-old German wunderkind, who went on to lift the Wimbledon title for the first time. “Obviously the job is not done yet,” said Berrettini. “I want to get the trophy now that I'm here. But it's just [a] really unbelievable feeling.”

“I’m just so happy for everything,” said Berrettini, who has been in regular contact with Panatta. “My year started in a good way, [by helping Italy reach] the ATP Cup final. Then I got injured again. I kind of saw those ghosts again of my body kind of struggling. Again, I came back stronger. I think I fully deserve to be here. I want to enjoy [it] like I did today.”

Berrettini is up to third position in the FedEx ATP Race To Turin for one of eight singles spots at the Nitto ATP Finals, to be held at the Pala Alpitour from 14-21 November. Since returning from a hernia/groin injury in mid-April, Berrettini has compiled a 24-4 match record, including the Serbia Open title in Belgrade (d. Karatsev) and a runner-up finish in his first ATP Masters 1000 final at the Mutua Madrid Open (l. to Zverev).

The charismatic World No. 9 is now hoping that it will be a ‘Super Sunday’ for Italy when he competes in the Wimbledon final and the football team challenges England for the European Championship title.

“Hopefully, whoever's going to win, they're going to support me — I hope,” said Berrettini, looking ahead to playing World No. 1 Novak Djokovic. “It's going to be a great atmosphere. My first final in Wimbledon. It's just crazy to think about it.

“It's [a] great day, [a] great sports day. I'm really happy that, together with football now, we are one of the biggest sports in Italy.”

Berrettini, who with his brother, Jacopo, always dreamed of playing in a big final, has got his wish.

“When we were kids, we were going holiday, we were always bringing our racquets,” said Berrettini. “We played so many times, even without the ball, just pretending we were playing in our living room [in] a great final. We were pretending to be players that now I'm playing against.

“I couldn't, unfortunately, for bubble reasons, meet them. I saw them from far away. My brother, I never saw him like that. He couldn't believe it. That's where we're coming from. That's my family. That's our passion… Tennis is in my family. My grandparents are still playing. It's something we have in DNA, and it makes me feel so good to have them here.”