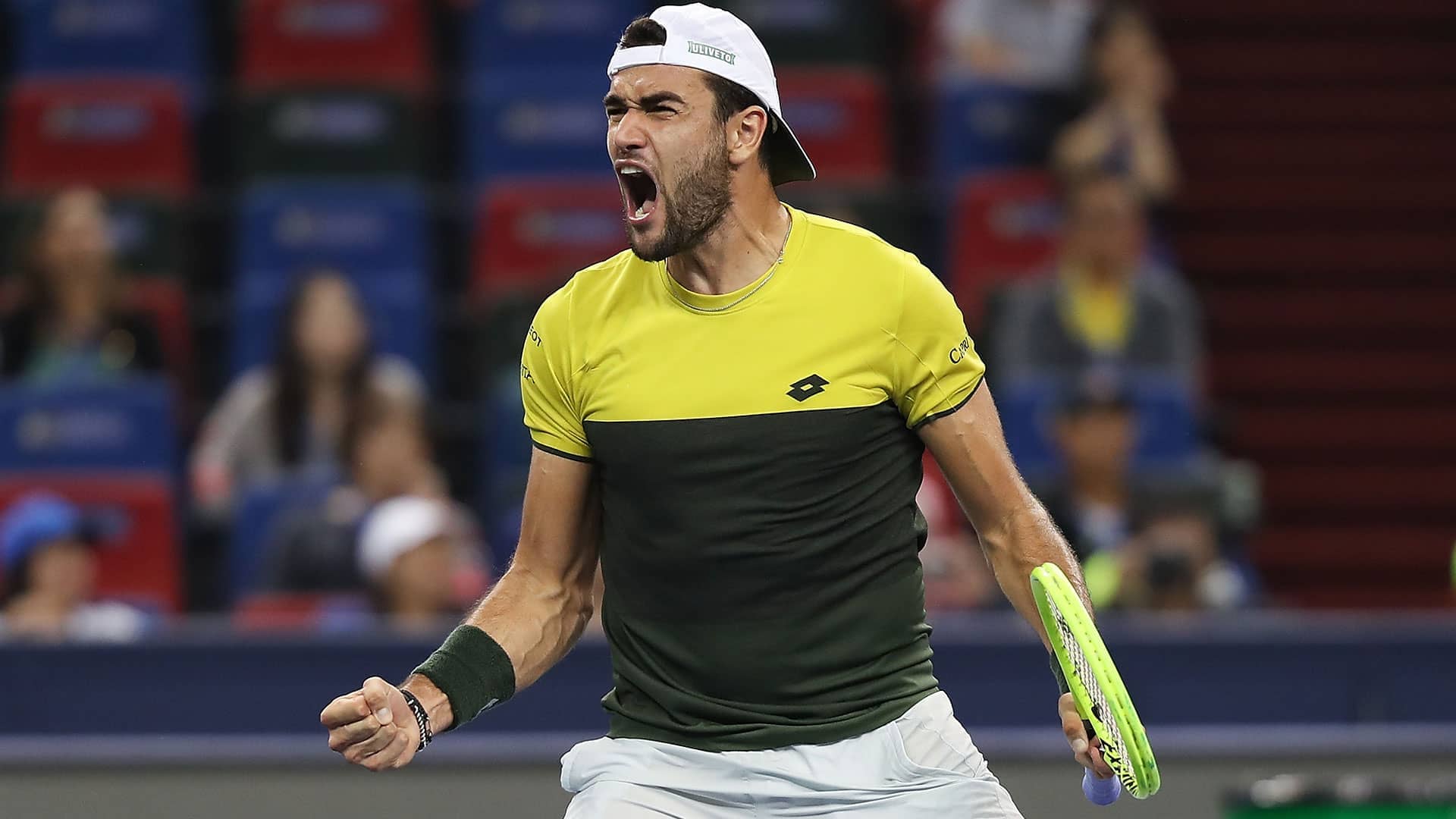 Matteo Berrettini, who started the year outside the Top 50 in the ATP Rankings, has qualified for the Nitto ATP Finals for the first time. Profile by BBC’s Russell Fuller.

Matteo Berrettini had just turned 23 when he pitched up in Budapest in late April to contest the Hungarian Open. He would win his second ATP Tour title that week – adding to his first in the Swiss mountain resort of Gstaad the previous summer – and his career has since had a dazzling momentum.

A successful clay-court season paved the way for more triumph on the grass, where he won the Stuttgart tournament and then reached the fourth round of Wimbledon, where he was stopped by Roger Federer. A first Grand Slam semi-final materialised on the hard courts of the US Open, where only Rafael Nadal could stop him. And then late last month, as a reward for his run to the last four at the ATP Masters 1000 event in Shanghai, and also for making the semi-finals of the tournament in Vienna, he became a Top 10 player in the ATP Rankings for the first time.

What first strikes you about Berrettini is his physical presence. Six feet five inches tall and powerfully built, he would not have looked out of place playing for the Azzurri in the recent Rugby World Cup. His serve and forehand are his most formidable weapons, but he seems increasingly comfortable at the net, and developed a handy slice when forced to play nothing else due to a wrist injury at the age of 17.

Berrettini’s parents are both club players, and so tennis has been a part of his life since he can remember. His parents may have been the first to thrust a racquet into his hands, but he also owes a debt of gratitude to his younger brother Jacopo. “When I was seven or eight, I wasn’t playing, and my brother told me, ‘Come to play – you’re going to enjoy.’ I was, like, ‘Hmm, I’m not sure.’ Then I went, and I never stopped. I started like this.”

Jacopo, who plays on the ATP Challenger and ITF World Tours, is two and a half years Matteo’s junior. So he cannot have been much more than five when he successfully negotiated himself a practice partner, and changed the direction of his brother’s life.

As a junior, at the elite level, Berrettini never excelled: his highest ranking was just 52. But there was a bigger picture taking shape, as Vincenzo Santopadre, a former Top 100 player who has been coaching Berrettini since the age of 13, told The New York Times. The teenage Berrettini, who always had a significant height advantage over his peers, did not practise or travel to tournaments as frequently as many others. Instead, Berrettini was encouraged to devote time to family, friends and schoolwork. Santopadre did not think Berrettini was either physically or mentally ready for any more at that time and was trying to build a player and a man who could thrive in the world of professional sport.

Slowly but surely, the mission has been accomplished. Berrettini was 21 years old when he made his main draw debut on the ATP Tour. Playing on clay in Rome, he lost as a wild card to Fabio Fognini in the first round of the 2017 Italian Open. He did not win a match on the ATP Tour until January of last year. And yet in 2019 he has been able to accumulate sufficient wins to earn himself a place in this exclusive eight-man field for the Nitto ATP Finals. Along the way he has faced both of his idols, on two of the most famous tennis arenas in the world. First in July, on Wimbledon’s Centre Court, he thanked Federer for the lesson – and enquired how much he owed him – after going down in just 74 minutes in the fourth round. And then in September, inside the cavernous Arthur Ashe Stadium in New York, Berrettini took on Nadal for a place in the US Open final.

Berrettini was the first Italian man to reach the last four in New York for 42 years. He had made sure of that by beating Gael Monfils in the fifth set tie-break of a gripping quarter-final.

Berrettini, regularly serving at over 130 miles per hour under the roof, and with the peak of his white baseball cap pointing down the back of his net, had two set points in the opening tie-break against Nadal. Nadal ultimately prevailed in straight sets, in front of more than 20,000 people, but Berrettini had come of age. It was some effort by a man who, because of an ankle injury, had only been able to play one match in the six weeks between Wimbledon and the US Open.

Berrettini grew up predominantly on clay but has shown this year how he can also play on hard and grass courts. “I was saying before [the US Open that my favourite surfaces are] clay and grass. Before the grass season, I was saying clay. Right now I can say all those surfaces. I think this kind of trip started long time ago, four years ago, with my coach. I used to play a lot on clay. I used to practise on clay. But my coach said, ‘Okay, we have to improve on faster surfaces.’

“So I played a lot of [tournaments] in 2015. I played 70 per cent of the matches on hard courts. I did an investment for my career. Of course, my weapons are good for hard courts, but it’s not that easy, especially because I’m tall. I like to play when I have time. I think that’s the biggest work that I did during these years.”

Whatever happens here on this hard court, you sense Berrettini will continue to enjoy his tennis. That has been his intention from the word go. “I said, this is going to be my passion,” he has disclosed. “I am loving this sport. I’m trying to enjoy every practice, even if it’s bad. For sure you have to enjoy what you’re doing.”