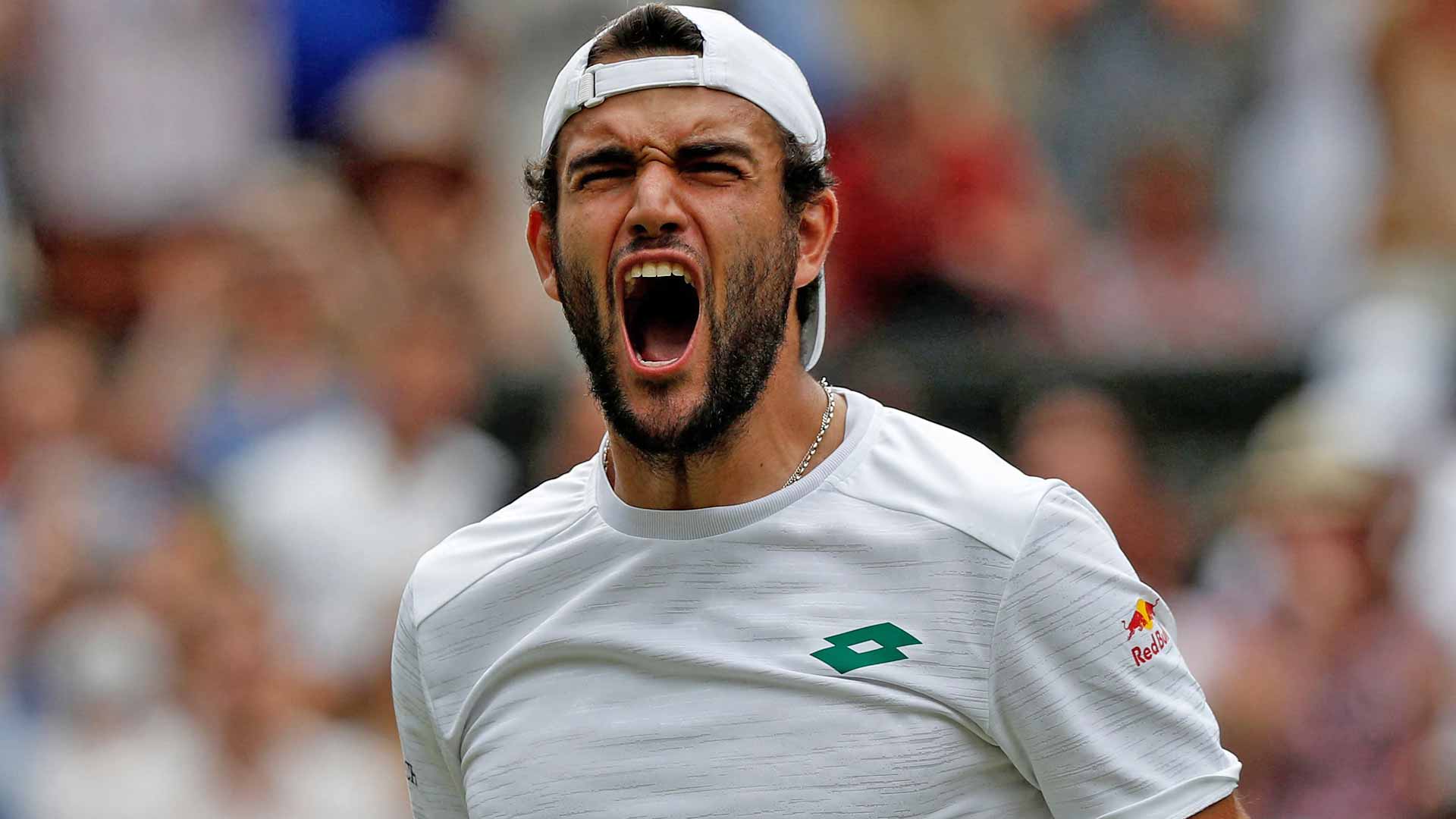 In a battle of first-time Wimbledon semi-finalists, it was seventh seed Matteo Berrettini who held his nerve and rose to the occasion against Hubert Hurkacz. The Italian became the first player – man or woman – from his country to reach the singles final at The Championships after an emphatic 6-3, 6-0, 6-7(3), 6-4 victory on Friday.

The seventh seed, who also reached the 2019 US Open semi-finals, did not lose his serve across four sets and saved both of the break points he faced on Centre Court. Berrettini blasted 60 winners, including 22 aces, as he powered his way to his first Grand Slam final.

"I have no words, really, just thanks. I need a couple of hours to understand what happened," Berrettini said on court. "I played a great match. I enjoyed the crowd, my family and whole team are there. I think I never dreamed about this, because it was too much for a dream."

He will next challenge the winner World No. 1 Novak Djokovic as he seeks to keep making Italian history at Wimbledon. A victory at the end of the fortnight would make him the first Italian man to lift a Grand Slam trophy since Adriano Panatta’s 1976 triumph at Roland Garros.

"[My] first Slam final, I'm just so, so happy for everything. My year started in a good way, with the finals in ATP Cup. Then I got injured again. I kind of saw those ghosts again of my body kind of struggling," Berrettini reflected in his post-match press conference.

"Again, I came back stronger. I think I fully deserve to be here. I want to enjoy like I did today. I want to enjoy my first final. Whoever's going to win today, I just appreciate what's happening. So I'm very happy."

The 25-year-old has enjoyed a strong grass-court season, after claiming the Serbia Open title and reaching the Mutua Madrid Open final (l. to Zverev) on clay. The Italian didn’t miss a beat as he switched surfaces, building up an 11-match winning streak starting with his victory at the cinch Championships at the Queen’s Club, his first ATP 500 trophy.

Berrettini carried that momentum into the All England Club, where he raced into his second Grand Slam semi-final after taking down good friend and 16th seed Felix Auger-Aliassime in four sets.

Hurkacz, who had to score a career-best victory over World No. 2 Daniil Medvedev and childhood idol Roger Federer, the sixth seed, en route to the last four, came out of the gate flat-footed and struggled to recover ground as Berrettini got going on Centre Court.

The seventh seed regularly followed his booming serve with a deadly forehand, where he earned 30 of his winners.  He kept the points short with his first strikes and did not allow Hurkacz to move up the court to close points at the net. Berrettini bossed the baseline exchanges, keeping the pressure on Hurkacz’s serve.

From 3-3, Berrettini reeled off four games in a row to clinch the first set, and another six went unanswered as Hurkacz quickly found himself down two sets to love after just 58 minutes. The Pole got back on the scoreboard in the third set, but struggled to find inroads into Berrettini’s service games.

In the tie-beak, Berrettini netted a putaway volley having had the open court as Hurkacz went 4/0 ahead, opening the door for Pole’s comeback. But he didn’t let Hurkacz run away with the momentum, pouncing on second serves to start the fourth set with an early break. Berrettini kept his nose in front, and closed out the victory after two hours and 36 minutes.

"[My emotions] are all over the place. At the same time, I think I handled the situation pretty well," Berrettini said. "[When] I stepped in the court, I was feeling confident. I knew that I could win the match. I think I played my best match so far. So I'm really happy for my performance.

"Especially after the third set... I felt I could win that set, also win the match, but [that] didn't happen. I said to myself, 'You're playing better than him, so keep going like this and you're going to win.'"

Did You Know?
Berrettini is the eighth Italian player, man or woman, to reach a Grand Slam singles final – after Pietrangeli (4 appearances), Francesca Schiavone (2), and de Stefani, Sara Errani, Panatta, Flavia Pennetta and Roberta Vinci (all one).