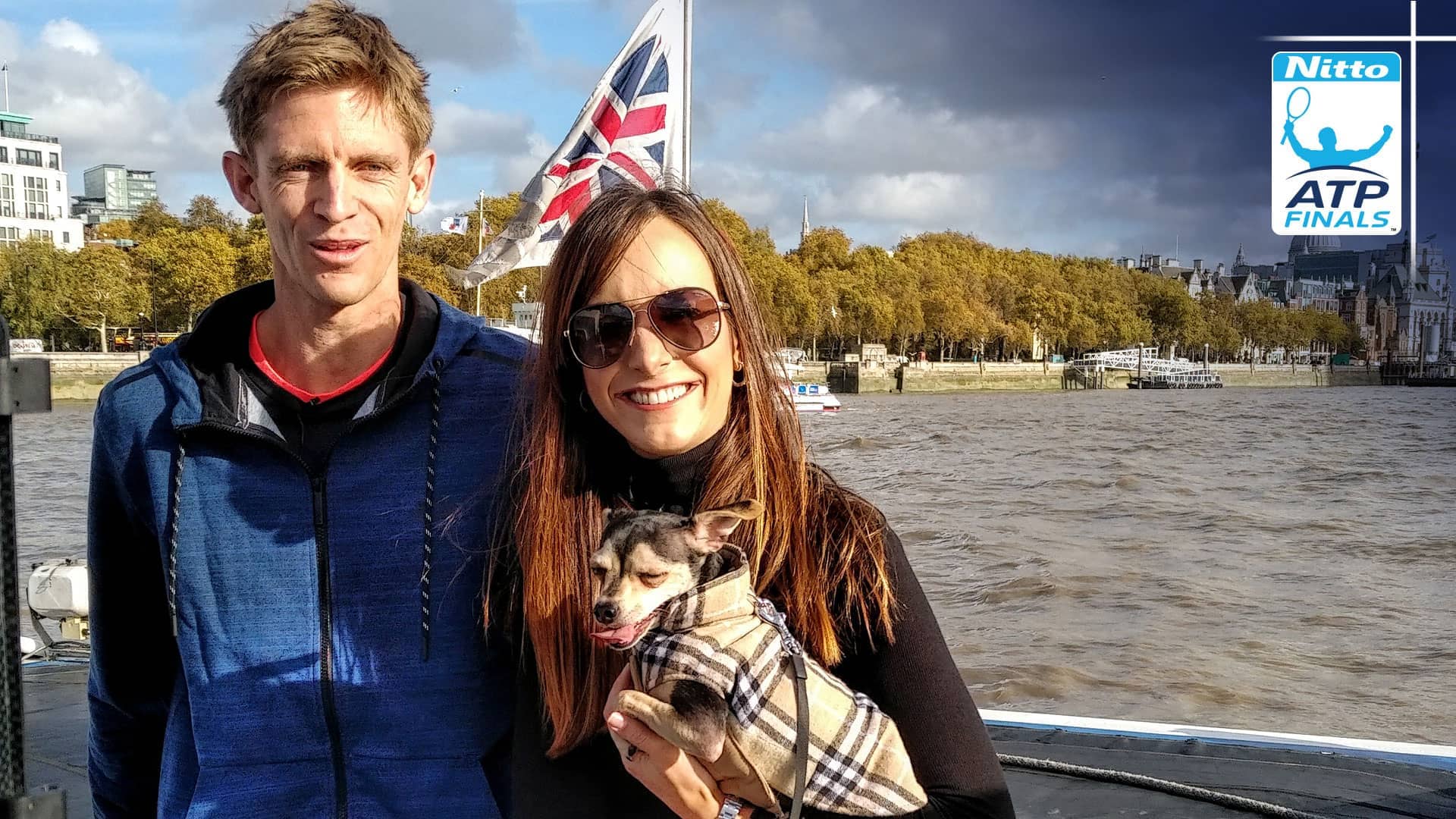 First-time qualifier Kevin Anderson and his wife, Kelsey, take a boat trip to The O2 on Thursday ahead of the Nitto ATP Finals. © ATP

A debutant at this year’s Nitto ATP Finals, Kevin Anderson is the first South African to qualify for the singles field at the season finale for 23 years. Rob Koenig, a South African tennis broadcaster and former player, profiles the Wimbledon finalist.

For tennis people in South Africa, and even across the whole of Africa, Kevin Anderson has shown this year how it is possible to achieve the unthinkable. How a young kid from Southern Africa, from a continent with very limited tennis resources, can end up playing on the biggest tennis stages of all, including here at The O2.

After appearing in his first Wimbledon final this year – where he was the runner-up to Novak Djokovic – Anderson is having another career highlight in London this week, after qualifying for the Nitto ATP Finals for the first time. This is truly a historic moment for Anderson, who is the first South African to play singles at the season finale since Wayne Ferreira in 1995, when the tournament was in Frankfurt. The tennis Anderson played at Wimbledon – coming from two sets down to defeat Roger Federer in the quarter-finals, and taking six and a half hours to beat John Isner in the semi-finals, with a 26-24 fifth set – had such a profound and far-reaching effect. Thanks to Anderson, tennis is once again part of the South African psyche.

With Anderson here competing at the most exclusive event on the calendar, he is once again raising tennis’ profile back home, where rugby, football and cricket have historically dominated the headlines. When you watch Anderson competing this week, take a moment to reflect on his journey. Qualifying for the Nitto ATP Finals is Anderson’s reward for a stellar season that has been filled with memories that he will enjoy in his rocking-chair years, many moons from now. But this season has been many years in the making for Anderson, who was born in Johannesburg.

While Ferreira’s professional life took off soon after leaving high school – within three years of joining the ATP World Tour, he was entrenched in the Top 20 – it has taken Anderson, who turned 32 this year, a little longer to reach his peak. Anderson’s achievements in 2018 can be traced back to the three years he spent playing for an American college – he grew his game in a highly competitive environment that he could never have found at home. Anderson’s father, Michael, has also been hugely influential – he helped to build discipline in all areas of his son’s game, which has been the cornerstone of his son’s success, including winning this year’s New York and Vienna titles.

Anderson’s victory over Djokovic at the ATP World Tour Masters 1000 in Miami in 2008 was big on two fronts. It showed he was on the right path with his disciplined training, but it also illustrated he had the tools to beat the very best on tour. And when you have the combination of those two elements early in your pro career, it’s massive. But it took him another two years to cement his place in the Top 100. That wouldn’t have been easy, but it is at times like those that you develop mental strength.

Winning a first title in Johannesburg in 2011, during that brief period when the city staged an ATP World Tour tournament, was a major step forward. With that win, Anderson gained new respect in the locker room, and he also encouraged South Africans to take a renewed interest in tennis – they realised he was a real contender on the international stage.

Anderson, who is 6’8”, and has ambitions of becoming this tournament’s tallest ever champion, is known for his big game: for his huge serve, his gargantuan forehand and a backhand that is a major weapon in its own right. But this wasn’t always the case; he has worked hard to get where he is today. But, throughout his tennis life, Anderson’s discipline, and his will to improve each and every day, remains undiluted. It’s a big reason why he’s now one of the best tennis players on the planet.

Much of that work has been done on the physical side. Some of that progress has been slow and measured, as he painstakingly improved his footwork and movement around the ball. Those are aspects of the game that don’t come naturally to him. He’s become a more efficient mover, something that’s tough for a man of his size. And of course, his endurance – seen at the All England Club this summer, in the second longest match in Wimbledon’s history – is unquestionable.

The wisest thing that Anderson has done has been to invest regularly in himself, be it with coaches, fitness trainers, physios or even sports psychologists. When you come from a country like South Africa with limited financial resources, it’s very tempting to want to hold on to every dollar you make and not spend anything on your team, because they can cost a lot. But he has never fallen into that trap.

It was at last year’s US Open that he played in his first Grand Slam final, where he was the runner-up to Rafael Nadal. And 2018 has been another year of improvement and progression for Anderson. He epitomises the growth mindset of trying to be just a little bit better each and every day. It’s hard to do that over and over for years and years, day in and day out. When you suffer crushing losses, it’s easy to feel sorry for yourself. But one of Anderson’s strengths is his ability to bounce back from adversity.

We saw that on the grass courts of Wimbledon this year, where Anderson was down two sets to love against Federer, and serving at 4-5 in the third set, facing a match point. Then Anderson achieved the unthinkable. He came back to beat Federer on his beloved surface, winning 13-11 in the fifth set. And then, just two days later, he had that epic match against Isner.

And if that was not enough, the class with which he handled himself after that win almost surpassed the victory itself. In this day and age, when athletes can often be so self-absorbed, and especially so after historic moments, the empathy Anderson had for Isner that afternoon resonated with fans around the sporting world. In South Africa, it raised his profile to dizzying heights. People who rarely talk about tennis wanted to know every detail about Anderson. Tennis wasn’t just on the back pages of all South African newspapers; it was on the front pages as well.