Tsitsipas: From Milan To London, The Emotions Of A Dream Come True 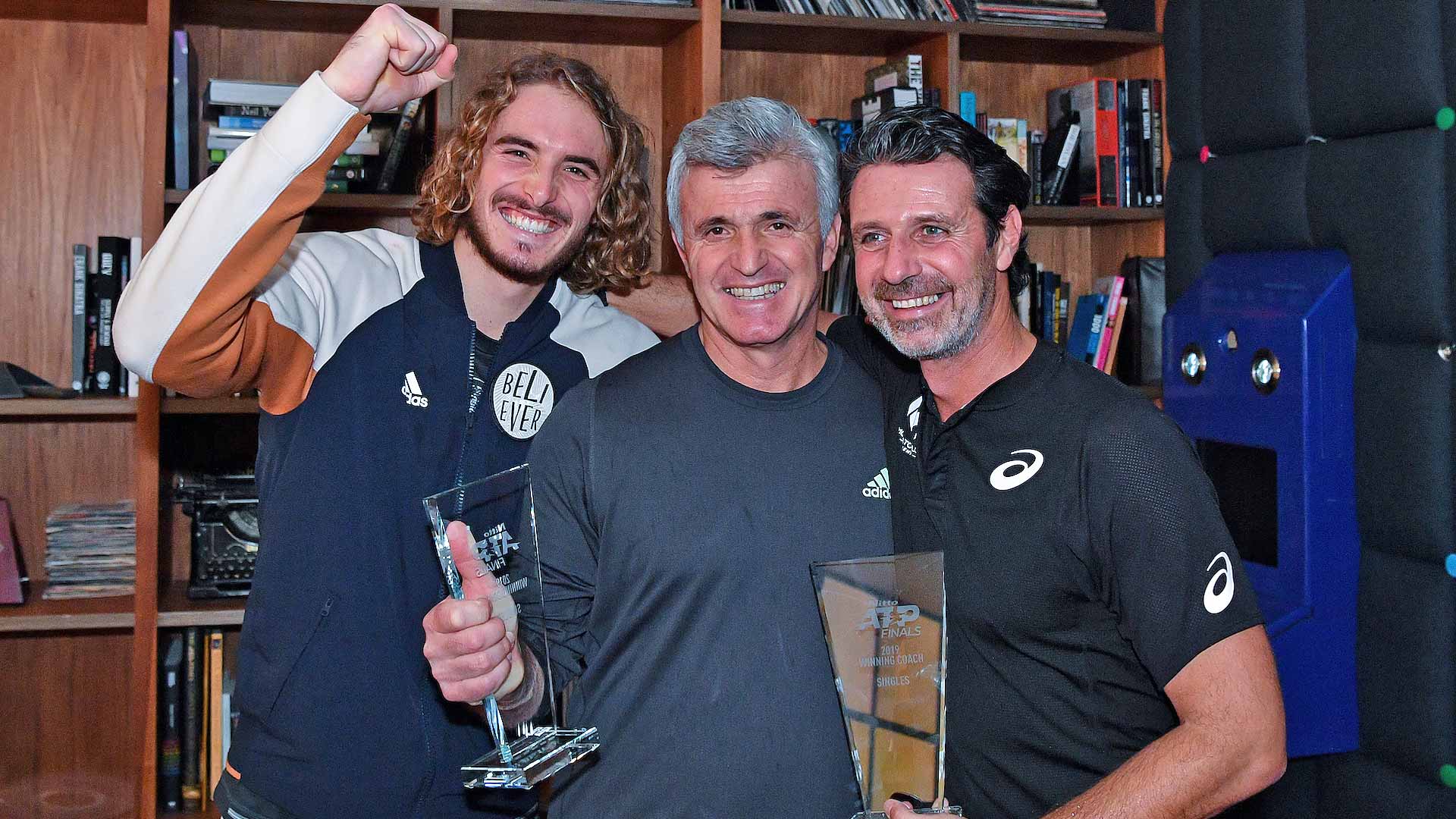 Two years ago, Stefanos Tsitsipas was on the outside looking in on the inaugural Next Gen ATP Finals, only making Milan as an alternate. Last year, the Greek captured the title at that event. But while he was excited to lift the trophy, he wanted to improve even more.

“[I want to] refresh and come to enter into 2019 stronger and better, just a better Stefanos than 2018,” Tsitsipas said.

‘Better’ understates how the 21-year-old performed this season. Tsitsipas capped off a tremendous 2019 with the biggest title of his career on Sunday, triumphing at the Nitto ATP Finals.

“I came with a lot of confidence in the [2018] Next Gen ATP Finals knowing I'm one of the best and I can do really well. Left with the trophy. Felt unbelievably excited for the new season because I beat he youngest generation of players. I think that gave me a tremendous amount of boost,” Tsitsipas said. “Fresh blood, they are always fighting more and they are new to the game, so for me that was a great first look of how things work and operate in the Masters circle. It's a great combo, isn't it?”

Tsitsipas has said on several occasions that he dreamt of competing in the Nitto ATP Finals against the best players in the world. After defeating then-World No.1 Novak Djokovic at the Rolex Shanghai Masters last month, a reporter told the Greek that he had booked his spot at The O2. His reaction was priceless.

“No way! Really? I didn’t know that!” Tsitsipas said, with a smile as bright as his game.

“Firstly, I was excited to be part of the Nitto ATP Finals experience. For me, it was already a big thing,” Tsitsipas said after defeating Dominic Thiem in Sunday’s final. “Now that I'm a champion, I don't know how to explain it. I honestly don't feel anything, because it's too many emotions to feel something.

“I remember myself watching this event on TV and thinking, ‘Oh, these guys have done an insane year to be playing here.’ And now I'm in the position to be champion, so it feels awesome.” 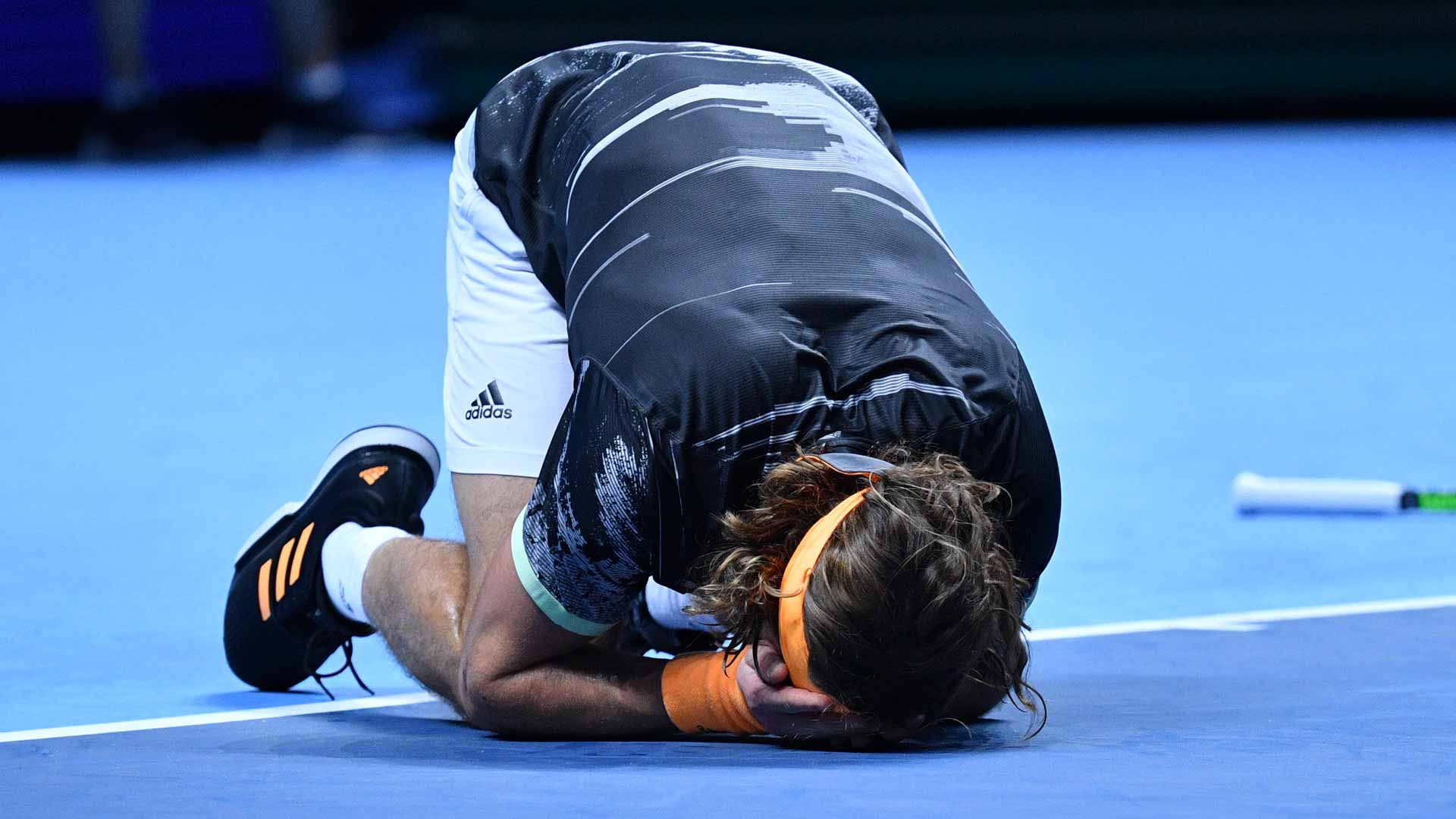 It’s fitting that Tsitsipas’ championship win came against Thiem, with whom he practised at this event three years ago, when he was the junior World No. 1. A photo of the two from after one of their hits that week resurfaced before Sunday’s final.

“That is unbelievable. I just remembered, yeah. First time I met Dominic was [when] I came here as a sparring partner, was No. 1-ranked in the junior rankings. I got invited by the ITF to come and be a sparring partner here in the Finals,” Tsitsipas said. “I think my first hit was with Dominic. It's unbelievable, isn't it? We [were] now facing each other in the final. It's great. It's fantastic. I met him for the first time. I think that year he didn't do very well, but he kept coming every single year, which is a tremendous amount of respect from me for what he's been achieving all these years.”

Tsitsipas’ success on big stages has not been a stunner this year. Even before triumphing in Milan last season, he advanced to his first ATP Masters 1000 final in Toronto. But he has climbed even higher this season, earning nine wins against Top 10 opposition, including four this week.

“I feel like my game is getting better over time, and I believe I'm really close on being crowned a Grand Slam champion. I know these are strong words that I say, but I do feel like I belong to be there,” Tsitsipas said. “I'm competing against one of the best players in the world, and the amount of effort and the amount of work I put every day deserves to have an outcome like this.”

The four-time ATP Tour titlist and year-end World No. 6 will have more eyes on him than ever after his memorable run at The O2. Last year, after winning the Next Gen ATP Finals, he reached his first Grand Slam semi-final just two months later at the Australian Open. There will be high expectations for Tsitsipas in 2020, but the Greek has not succeeded by looking too far ahead.

“I wish I could predict the future. I cannot predict the future. You think I could predict that I would be in the semi-finals of the Australian Open, first Grand Slam of the year? I was thinking that it might happen later... [it] came completely unexpected for me,” Tsitsipas said. “The thing is, if I put myself in a state of mind that I need to win this Grand Slam now, it doesn't work this way. Rafa said it in the past: I'm not playing to win the tournament, I'm playing to win every single match that I'm about to go and play.

“So that's how it works. You don't want to travel too much in the future when you play a tournament, because it's not always going to go the way you want it to go.”

But at this year's Nitto ATP Finals, it couldn't have gone any better.