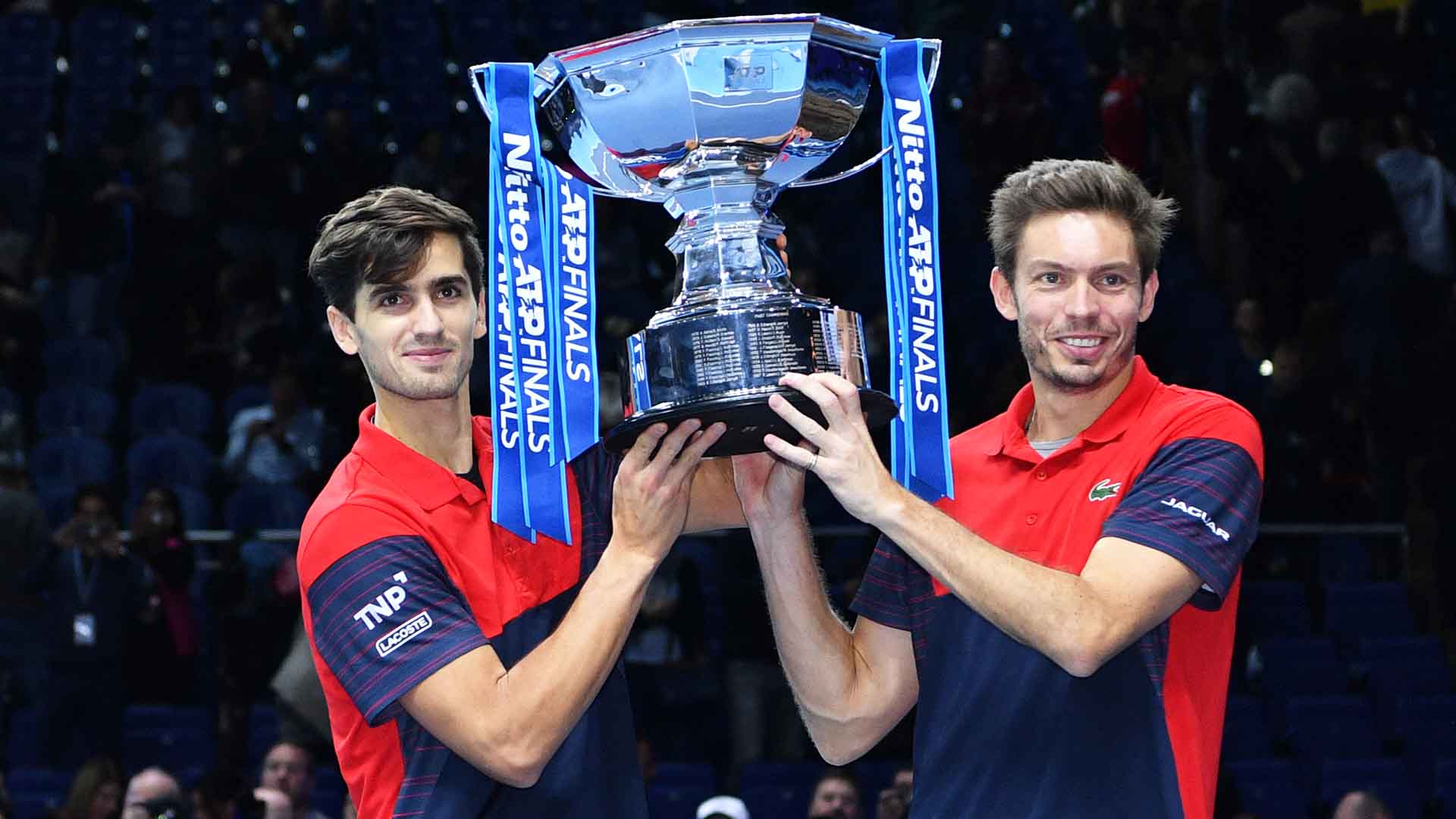 One year ago, Pierre-Hugues Herbert and Nicolas Mahut came within one point of lifting the Nitto ATP Finals trophy for the first time. When presented with a second chance on Sunday, the Frenchmen finally claimed the crown at The O2 with a 6-3, 6-4 victory against Raven Klaasen and Michael Venus.

“It is pretty special [to win this trophy]. Maybe, for doubles, it is one of the toughest tournaments to win,” said Herbert. “After our story in London — we had three really tough years and last year we had a match point in the final — being able to win here is an amazing feeling.”

The seventh seeds notched their ninth straight victory to lift the trophy after 70 minutes, saving all four break points they faced. Mahut and Herbert have won all 18 sets they have contested since arriving at the Rolex Paris Masters last month. The career Grand Slam winners are the first team to lift the trophy at The O2 without dropping a set since Jean-Julien Rojer and Horia Tecau in 2015.

“We had a great week in Bercy and we really played well in the group stage,” said Mahut. “The final was maybe the best match we played during the week. It is fantastic to finish with this high-quality tennis.”

Herbert and Mahut become the first French team to capture the season-ending crown since Michael Llodra and Fabrice Santoro, who triumphed in 2005 in Shanghai. This is their 15th tour-level trophy as a team, adding to 2019 crowns at the Australian Open and Rolex Paris Masters. With their Australian Open trophy in January, Herbert and Mahut became only the eighth men’s doubles team to complete the career Grand Slam.

"Thank you for sharing the court with me, for having so much enjoyable moments and giving me so much joy when I am with you on the court," said Herbert, on playing with Mahut. "You played an unbelievable final, so thank you for that."

With their 10th victory in 18 matches at this event, Herbert and Mahut improve to 19-5 this season. The Frenchmen collect 1,500 ATP Doubles Rankings points for their unbeaten title run in London and share $533,000 in prize money.

The Frenchmen broke for a 3-1 lead in the first set, as Herbert attacked Klaasen with a series of low backhands to extract errors from the 37-year-old. The seventh seeds maintained their advantage through to 5-3, when Herbert fired an ace out wide to clinch the opener after 33 minutes.

After Mahut saved break point at 2-3 in the second set with a powerful body serve, the Frenchmen made their move in the following game. In the first two points, both players fired return winners before Klaasen double-faulted to concede the break. Mahut used a familiar serving tactic on championship point, firing into the body of Venus to clinch the title.

"Thank you Julia for saying yes!" 💍@p2hugz announces on court he and his girlfriend Julia will be getting married ❤

Two-time Nitto ATP Finals champion Max Mirnyi carried the trophy on court for the doubles trophy presentation ceremony. The Belarusian had the honour, alongside Jonas Bjorkman, of having one of two round-robin groups named after him at this year’s event. Mirnyi was joined on court by ATP Executive Chairman and President Chris Kermode, Nitto ATP Finals Event Director Adam Hogg, AEG Europe President and CEO Alex Hill and Nitto President, CEO and COO Hideo Takasaki.

"We won the Max Mirnyi group and today we won the final in front of you, Max, so it is a priviledge," said Mahut. "You are such a legend and we are really happy to win in front of you. Thank you, Max, for coming."

After saving two match points in their semi-final win against Juan Sebastian Cabal and Robert Farah, Klaasen and Venus were attempting to capture their third title of the year. The fifth seeds lifted ATP 500 trophies in Halle and Washington, D.C and also reached finals in Auckland and Rome. Klaasen and Venus leave London with 800 ATP Doubles Rankings points and will split $289,000.