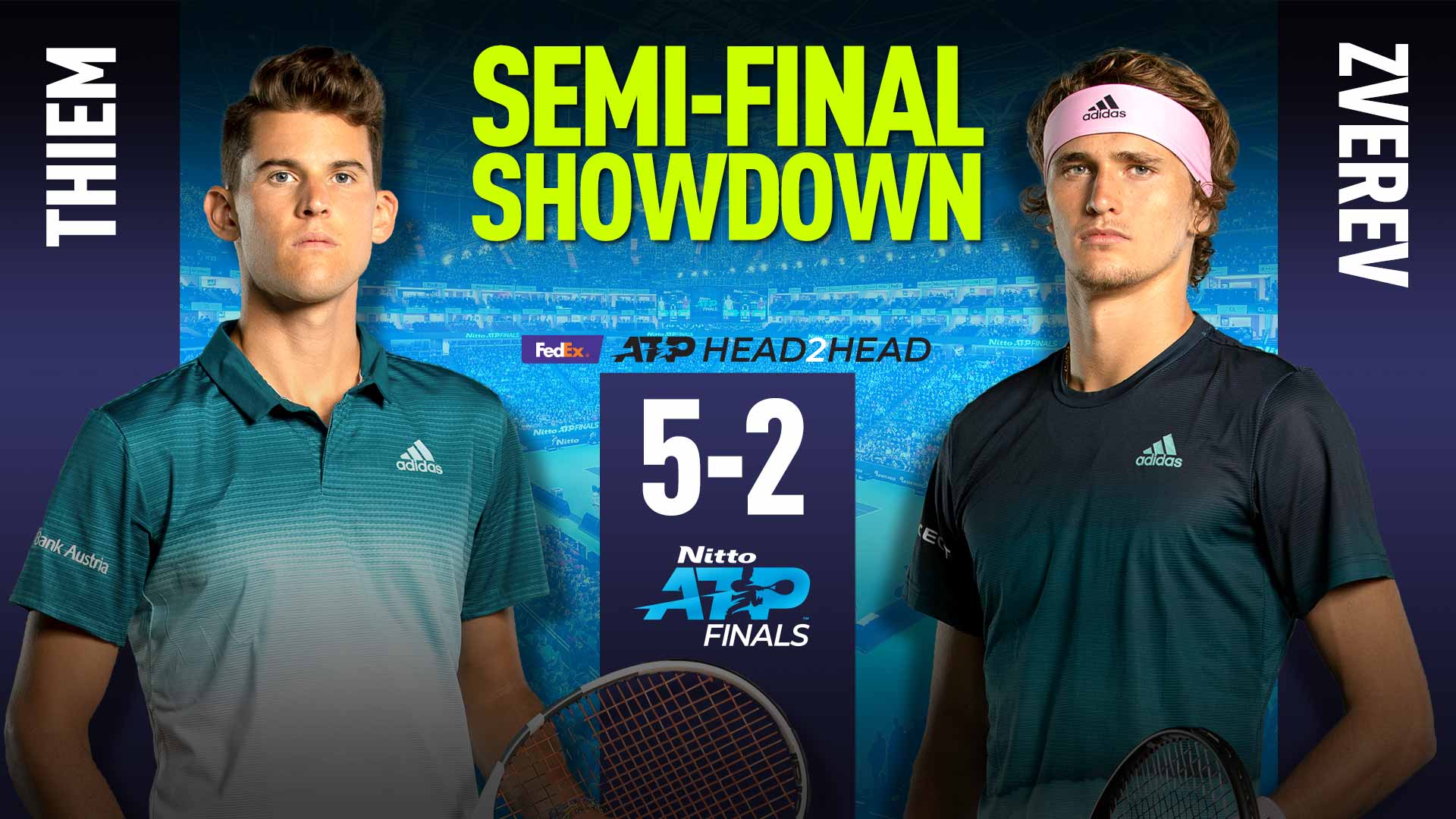 Dominic Thiem and Alexander Zverev will meet for the first time since 2018 Roland Garros. © ATP Tour

One year ago, Alexander Zverev shocked the tennis world when he defeated Roger Federer and Novak Djokovic in back-to-back matches to win the biggest title of his career at the Nitto ATP Finals. After battling through a pressure-packed match against Daniil Medvedev to earn a spot in the semi-finals on Friday, Zverev is just two wins away from retaining his crown.

But the 11-time ATP Tour champion has a significant hurdle directly in front of him in Austrian Dominic Thiem, who is into the semi-finals at the season finale for the first time. Thiem leads their FedEx ATP Head2Head series 5-2, and he is playing some of his best tennis, defeating both Federer and Djokovic in Group Bjorn Borg play.

“He's been playing some unbelievable tennis, maybe the best tennis that we have ever seen from him. Actually beating Roger and Novak on this court is very special. Doing it back to back is very, very difficult,” Zverev said. “It's going to be a very difficult match. I'm looking forward to it. Honestly, I'm just happy to be in the semis, and from here on we'll just see how it goes.”

Advancing to the semi-finals at The O2 is a major accomplishment in itself, with the eight best players in the world competing for only four spots. But that is only part of the battle, with players then needing two additional victories to lift the trophy.

“I think that maybe this tournament is the most difficult to win, because you have to beat five Top 10 guys in a row. Okay, you can afford to lose one match maybe, but still, that's why I'm 100 per cent sure that if you win this title you can win, as well, any other title,” Thiem said. “I haven't done it yet, but I think that if you win this title, it gives you a lot of confidence for especially of course Australia, because it's the closest, but for the full next year.”

Thiem and Zverev have not played since 2018 Roland Garros, where the Austrian dropped just seven games in the quarter-finals en route to reaching his first Grand Slam final. He also won the pair’s only previous match on an indoor hard court, at 2017 Rotterdam. That victory came in three sets.

Zverev has the edge in experience at The O2, though. Although this is Thiem’s fourth appearance to Zverev’s third, the German triumphed last year, while the Austrian had won three matches in his three previous showings combined.

“This arena, this place is special to me,” Zverev said. “I feel different here, and this kind of feeling I want to take to next year, as well, to the next tournament. Doesn't matter if I win or lose. Obviously I want to win and I'll do everything I can.”

Both players have shown good form this week, and Zverev admits that not just in his match, but in the tournament on a whole, there is plenty still up in the air. Every player will need to bring their best in their respective clashes from start to finish.